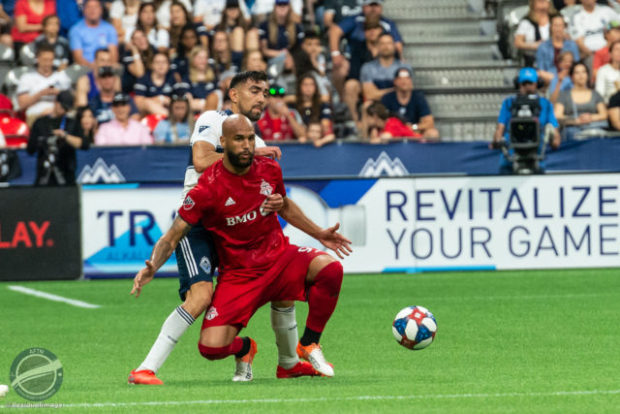 It’s an unusually early start this weekend for the ‘Caps as they kick off against Canadian rivals Toronto FC at 1pm to begin a four-match homestand that includes a Canadian Championship clash with Valour FC. The ‘Caps remain in the MLS basement with just four points from eight matches and have not been close to good by any sort of standard metric.

The injury bug has only made matters worse, with Tristan Blackmon – one of the few bright spots so far this season – hitting the shelf for the next month at least with a knee injury. He joins Caio Alexandre, Cristián Gutiérrez, and Leo Owusu as out for this weekend’s match, while newcomers Andrés Cubas and Luís Martins aren’t ready to play yet either.

The good news is that there is some relief in terms of players coming back. Ryan Gauld cleared concussion protocol last week and should be good to go against TFC, while Érik Godoy could be in line for his first action of the year after a couple successful appearances for WFC2.

Vanni Sartini has reportedly been testing out a four-at-the-back system in training, and a system change makes given how the current system has…not been working as idealized. If Godoy is cleared to start then the most likely pairing in the centre of defence is him and Ranko Veselinović, with either Jake Nerwinski or Javain Brown at right-back.

Left-back is more interesting given that both Gutiérrez and Martins aren’t able to play this weekend. This means that we will likely see someone playing on their opposite side in either Brown or Marcus Godinho, as while Ryan Raposo and Cristian Dájome have both played wingback it’s asking a lot of them defensively to play in a back four.

And really, at least in the case of Dájome this system change should serve to push him further forward where he can hopefully rediscover the attacking threat he had for much of last season. We could potentially see a 4-2-3-1 with him as one of the wingers, or more of a 4-4-2 where he’s up at the top.

Either way, there should be an amount of change in how the ‘Caps line up for this match. Whether that’ll lead to changes on the scoreboard is to be seen, but a shakeup is certainly needed especially when notable reinforcements are still a month or so away.

The visitors are also struggling with a bit of a shorthanded squad at the moment. Young midfielder Ralph Priso is suspended, while Carlos Salcedo, Jonathan Osorio, Chris Mavinga, and Ifunanyachi Achara are all expected to be out on Sunday. They are coming off a 2-0 loss to Cincinnati where they were down a man for nearly the entire match after Priso was shown a red card in the first six minutes.

It’s not been a pretty start to the season for Toronto, in fact they are worse than the ‘Caps in both expected goals for and against! The difference is that TFC so far is overperforming in both categories while the ‘Caps are underperforming in both (Vancouver actually has the worse underperformance when it comes to expected goals against in MLS, not a good look for Thomas Hasal).

The ‘Caps have a 6-7-4 record in MLS play against Toronto. That includes a 2-2-2 mark in the last four years, showing just how even they’ve been against each other recently. The ‘Caps have not lost at home against the Reds since March of 2017. The Whitecaps have scored a league-low six goals, while TFC have shipped a league-high 21 goals. Which side will be able to buck those trends? Hopefully the numbers can start to trend westward.