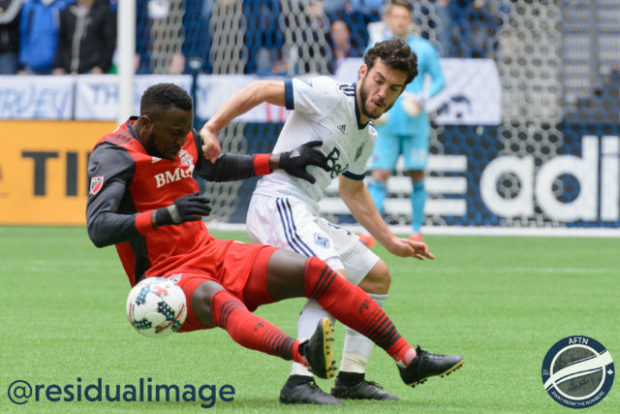 Yes, it’s been 380 minutes (not including extra time) since the ‘Caps found the back of the net, and it feels even longer than that because of the time gaps in between matches. When they kick off Saturday night it will be 44 days since Cristian Dájome scored against the Fire. That’s nearly six and a half weeks, or over 1,000 hours.

August came and went, and the ‘Caps were left with zero points, zero goals and three losses at the hands of Canadian opposition, who they will now face again at home. First up is Toronto, who handed the ‘Caps one of their worst-ever defeats in their first match of August before cooling down a bit and only winning 1-0 in the second.

What can the ‘Caps do to turn the tide? Bar the potential return of Fredy Montero, the personnel is the exact same, as Érik Godoy and Janio Bikel are still both not quite there in terms of fitness. They’ve shuffled between a 4-4-2, a 3-5-2, and a 4-3-3, and none of them produced goals. If you’re not feeling bleak, I’m impressed.

The one bright spot from the ‘Caps’ 2-0 loss to Montreal last week was the play of Michael Baldisimo, as the 20-year-old was very composed in his MLS debut, notching a 93% passing accuracy and nearly scoring off a free kick. He actually looked capable of breaking through the opposition with forward passing, which has been a rarity for the ‘Caps, and he is surely in line for more minutes over these next three matches.

Otherwise, it was more of the same. Thomas Hasal had some nice distribution but wasn’t able to steal a point (nor should he have been expected to), Derek Cornelius was solid, Ali Adnan continued to be ineffective, Russell Teibert was there, David Milinković had a couple sweet dribble moves that didn’t lead to anything, and Lucas Cavallini left the pitch frustrated.

Cavallini has had a pretty brutal start to his ‘Caps career. He’s only played in five matches due to understandably deciding not to go to Orlando, and he has just nine shot attempts because his teammates have been wholly unable to get him the ball. He’s also missed two penalties, which is unacceptable for a DP striker, and he’s actually now failed to convert five straight spot-kicks, dating back to January 2019 in Mexico.

Cavallini will start up front because, well, he has to score soon, right? The question is who’s going to actually set up the attack. Yordy Reyna? He’s only started one of the last five matches. Ryan Raposo? He also has not seen much playing time. I have no idea what the answer is, and it’s looking like Marc Dos Santos and his team don’t know either.

Looking at our visitors, TFC will be without Michael Bradley, who suffered a sprained MCL in their 1-0 loss to Montreal on Tuesday. On the other end of the injury spectrum, Ayo Akinola played 30 minutes off the bench in his return from a spell on the sidelines, and will likely feature at some point on Saturday.

Rudy Camacho’s 14th-minute header for the Impact on Tuesday is the only goal TFC have conceded in their last five matches, in fact they are tied for third in MLS with just eight goals allowed this season. They have not lost to the ‘Caps in nearly two years, and are 4-1-2 against Vancouver since the beginning of 2017. A win on Saturday will put them in prime position to qualify for the Canadian Championship Final, so they should come out aggressive once again.

I would say it’s time for some home cooking for the Whitecaps, but the pot seems like it might be empty. It’s hard to imagine a win, and easy to picture another shutout loss. The ‘Caps need to give us a reason to believe, otherwise there’s not any point in watching.