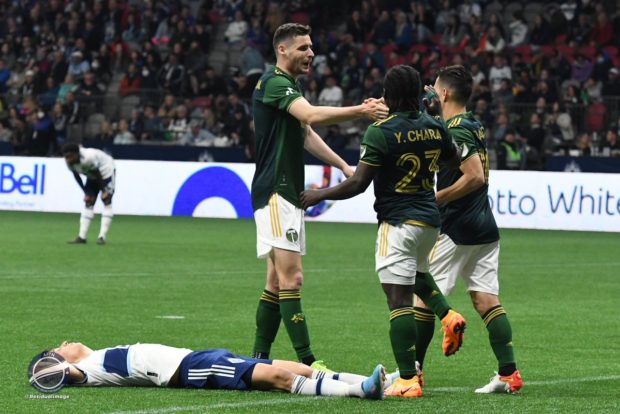 It took a bit of time for things to warm up, but the first Cascadian derby of the new season produced plenty of drama and talking points by the end of it as Portland Timbers came to BC Place on Saturday evening and left with all three points after a hard fought 3-2 victory.

Five goals, three penalties, and a slew of video reviews highlighted this one. Dairon Asprilla had put Portland ahead from the spot three minutes before half time in a disappointing first half, but the action exploded in the second. Deiber Caicedo had a goal ruled out for the Whitecaps for a foul in the build up just before the hour mark, and that was to prove doubly costly when the Timbers went two up through Jarosław Niezgoda moments later.

Vancouver fought back through a lovely Cristian Dajome curler in the 76th minute, but the ‘Caps joy was short lived and the Timbers restored their two goal advantage just two minutes later when Yimmi Chara capitalised on more poor Whitecaps defending.

There was still time for more late drama and it was a tale of two penalties, with Dajome missing a spot kick for Vancouver in the 88th minute, only for the ‘Caps to get another one six minutes into stoppage time, which Ryan Gauld duly dispatched. There simply wasn’t enough time for the Whitecaps to get a dramatic late equaliser and their first home loss of the season was soon upon them.

Vanni Sartini made three changes to his starting line-up, with Cristián Gutiérrez and Florian Jungwirth coming into the backline and Cristián Dajome came back into the wingback role. Lucas Cavallini was a late scratch from the subs bench with a stomach bug, severely hitting the ‘Caps danger and impact if they needed help late in the game, which they then did.

Even taking the derby connotations out of things, this was an important game for both sides. Vancouver have made it clear about the need to take points at home, and ideally all three. For Portland, they couldn’t afford to make it four straight losses.

Perhaps it was for that reason that it was a fairly cagey first half, with very little of note bar a few half chances. That was all to change in the 38th minute.

Marvin Loria had been given acres of space on the left side all half and he finally made it pay with a run into the box only to be brought down clumsily by a charging Dajome. Referee Silviu Petrescu initially said no foul, but after a video review, Portland were awarded a penalty and Dairon Asprilla made no mistake from the spot, with a very well taken penalty, sending the Timbers into the half with the one goal lead.

It felt harsh to go in at the break behind. but when you don’t register any shots on target through the first 45 minutes, it’s hard to expect anything else.

It was a much livelier Whitecaps after the interval, with Gauld producing probably his best half of football so far this season and he had a header into the side netting in the 54th minute.

The Whitecaps had a split second of thinking they’d tied things up four minutes later when Deiber Caicedo won the ball in the box and curled a low one in off the far post, but the referee had blown quickly, and correctly, for a foul on Larrys Mabiala.

If that was one dagger in their hearts, a second came moments later when Niezgoda made it 2-0 for the Timbers. Yimmi Chara played a ball from the right to Sebastián Blanco, who turned and played it into the box for the Pole, who danced into the box, leaving Jungwirth looking foolish on his way past, firing a left-footed shot into the back of the net.

It seemed to take Vancouver going down by two goals to actually take things up a gear and a lot of it was sparked by taking off one of the two DMs, Russell Teibert, and moving to a much more attack minded and effective formation.

Sebastian Berhalter had a long range effort saved by Aljaž Ivačič midway through the half, and the Slovenian was called into more action when he tipped a dipping goalbound header from Brian White over the bar in the 72nd minute and then denied Gauld after a nice turn and shot moments later.

Vancouver’s pressure finally paid off in the 76th minute. Deiber Caicedo cut the ball back from the byeline and it was allowed to run past everyone to reach a wide open Dajome 12 yards out, who curled it into the top right corner of the goal.

GAME ON in Vancouver. pic.twitter.com/J4V6G78T7b

It had been a struggle, but Vancouver were now very much back in the match, so it was then extremely frustrating for them to undo all their good work just two minutes later, when more poor defending cost them dear and allowed Portland to restore their two goal lead almost as soon as they’d lost it.

Blanco threaded a pass into the right side of the 18-yard box for Yimmi Chara to take a touch and take it into the box. It looked liked the Timber had lost possession, but after a favourable bounce off Dajome and a failure to get his foot on the ball by Gutierrez, Chara got the ball back and drilled it into the upper right hard corner of the goal past Thomas Hasal.

And the Whitecaps players knew it.

That felt game over, but Vancouver were thrown a late lifeline with mere minutes remaining when Gauld was bundled over in the box by Claudio Bravo. Petrescu waved away the initial protestations but changed his mind after a video review. Dajome stepped up for the spot kick but his effort was saved by Ivačič, and the rebound was cleared before the Colombian could get on to it.

ON HIS FIRST PK IN MLS HE SAVES IT!! WELL DONE JAZZY #RCTID pic.twitter.com/I8y5baT2T1

It was a good stop by the keeper, but Dajome will watch it back and wish he’d placed it higher.

Three minutes into stoppage time, Vancouver got another penalty when Caicedo was pushed down in the box by Bravo. It looked soft and Petrescu was called for a video review, but this time he stood by his decision.

Gauld was on penalty duty this time and he duly dispatched it to bring Vancouver within one. There was still two minutes left but it wasn’t to prove to be enough time for any more drama and Portland held out to secure three big points and condemn the ‘Caps to their first home loss of the season.

A disappointing, and on the balance of play, an undeserved defeat for Vancouver in some regards. But when you let a team score on three of their four shots on target, you also reap what you sow.

There were some positives to take from the second half performance, but there’s still a lot of questions surrounding the Whitecaps six games into the season. Formation, tactics, and team selection are all issues that loom large, and with the transfer window still open, it really feels like they could do with strengthening both at the back and up front. A midfield destroyer would also be nice, and getting some key players back healthy asap is also now becoming a necessity.

Things won’t be getting any easier for Vancouver next weekend as they head to Montreal to take on a team fresh from an impressive come from behind victory this weekend. With three road games now coming up, you feel things are only going to be getting tougher for the ‘Caps as this month progresses.

“I’m pissed. I’m very pissed because I think we played a lot in their box. We had chances where we could have scored a lot of goals. We did also well I would say with our pressure because they broke us twice in the game. But we need to be 100 per cent every time. So if we concede, kind of three situation and those three situation becomes huge chances. It’s hard because thinking about having Portland here and not conceding, it’s hard. So we’ll need to reevaluate the game and I want to see it. But to be honest, at the moment, I’m disappointed because I don’t know the numbers but probably we had like seven or eight shots more than them. I need to see the stats and everything but it’s a game that was not even with time, we should have won. Having been three points less, now we need to win some games on the road.”

On changing the system in the second half:

“Well you know, we changed the system, we played with only one defensive midfielder and two kind of offensive mids, because Portland played all in their half in the last 30 minutes. Between the two midfielders with Seb and Pedro, then Ryan for Javain, then Rusty, so that’s the change. I put Javain because we wanted to build with a little more bite. I think we were okay a little bit on the side but I think we wanted more bite on the attack in the space behind. I think we did what we were supposed to do for 30 minutes with them on the field. I think we created three or four chances. We missed a penalty, we don’t have to forget that we missed the penalty too. Unfortunately I’m so pissed about the second goal because we shouldn’t have conceded.”

“We’re at home, we have to win games at home, and we’re a strong team at home. So to give up that game is definitely disappointing. We’ve got a good game next week and we’ll be ready to go.”

On Sartini’s message during half time:

“What can I say, tough game honestly, I’m pissed off, sorry if I can’t say that. I’m going to think a lot tonight about how we lost this game. We conceded some stupid goals, but I’m happy that we were trying all game. Honestly even at 2-0 I believed that we could tie this game, but we couldn’t make it.”

On his reaction over the result:

“I’m just angry over the result, I mean we took a loss and I think we spent almost 50 per cent of the game in their half and we conceded with their counter attacks. They’re a good team of course, they have quality, I think we needed a little more luck today.”