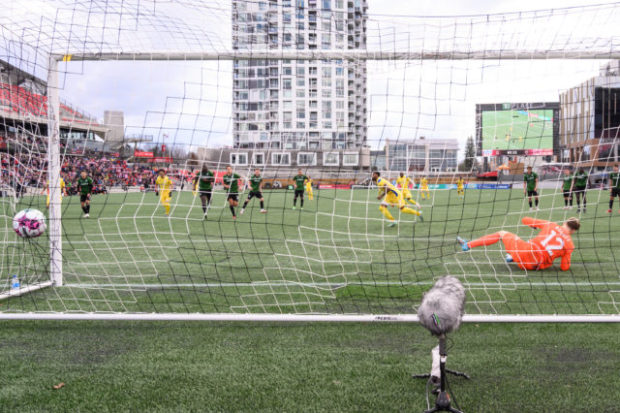 A penalty kick goal from Brian Wright in the 81st minute was enough for Atlético Ottawa to overcome Cavalry FC in the two teams’ 2022 Canadian Premier League (CPL) season-opener at TD Place on April 9.

Ottawa had earned the spot kick after a hand ball in the box from Cavalry’s José Escalante, who dove to block a shot after Cavalry’s defenders failed to clear their lines. With just under 10 minutes left, Wright sent Cavalry debutant goalkeeper Julian Roloff the wrong way, nestling his kick into the top-right corner to gain a late 1-0 lead for the hosts.

Despite a red card from Atlético captain Drew Beckie in the 86th minute, after stepping on Cavalry’s David Norman Jr.’s foot, the hosts were able to quell Cavalry’s offensive pressure in the final moments of the match to secure the three points.

After the game, Cavalry head coach/general manager Tommy Wheeldon Jr. told OneSoccer that he would have obviously preferred to take the three points back to Calgary, but acknowledged the capital city side put in a solid enough performance to seal the victory in front of their own fans.

“I don’t think we deserved to lose, but we didn’t do enough to win,” Wheeldon Jr. said. “We have to build from that. We had opportunities to clear it and get rid of the ball [on the play that led to the penalty]. but the boys looked smashing.”

“I thought we owned the second half but didn’t put it in the back of the net, and that’s what you have to do to win games in this league.”

Cavalry outshot the hosts 16-9, led 13-2 in corner kicks, and held 56 per cent of possession over Ottawa throughout the 90 minutes, but couldn’t put a shot past ‘keeper Nathan Ingham.

The visitors had their own penalty shout in the first half, when Sergio Camargo went down in Ottawa’s box following a challenge, but the referee waved play on.

Striker Joe Mason had a chance to pull Cavalry ahead just after the hour mark, but dragged his shot wide.

“I think the first half, we were OK,” Wheeldon Jr. said. “I thought our defensive shape was good. They didn’t really create too much other than when Balou Tabla hit the crossbar.

“But in the second half, I thought we owned possession. We started camping out in their half, and they didn’t have much on us. I thought we had some good balls into the box. Joe Mason had a great chance around the penalty spot, and we had some nice set-plays and deliveries.” 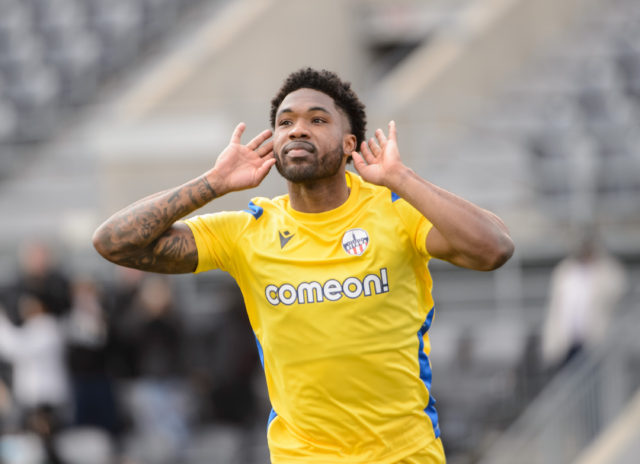 Their win shows Atlético continue to be a bogey side for Cavalry FC – since the team’s introduction to the CPL at the 2020 Island Games, Ottawa has beaten the Cavs in four of their five meetings.

This year’s Ottawa team is very much a new-look squad, led by new head coach Carlos Gonzalez, who took over from Mista after an eighth-place showing in 2021. Just six players from last season’s Ottawa roster have returned, while 12 new signings have been named.

“We’re disappointed not to [beat] them here, but they’ve put together a terrific squad,” Wheeldon Jr. said of Atlético.

“They had their moments and it was a great chess match. I think they’ll certainly be contending at the end of the season and we look forward to playing them again. They haven’t been to ATCO Field at Spruce Meadows, so it’s a different time when they come to us.”

Cavalry sported an injury-ravaged line-up in Ottawa; On Monday, the club announced four players who are out with injuries for undisclosed amounts of time, including goalkeeper Tyson Farago (back), left back Tom Field (knee), striker Anthony Novak (ACL), and midfielder Joe Di Chiara (MCL).

The Calgarians will look to regroup on April 16 when they face their perennial rivals Forge FC in Hamilton.

“It’s not doom and gloom,” Wheeldon Jr. said of the season-opening defeat. He likened the 28-game regular season to a “qualifier” for the four-team playoffs that will determine the CPL’s 2022 champion.

“So, we have 27 more games to get points on the board. We’ll do it. Credit to Ottawa and a new coach. They got their win and were defensively solid, making it tough for us. We’ll recap on it and keep moving forward.”