*** We weren’t able to get out to any VMSL Premier matches this past weekend, so this week’s round-up is courtesy of the VMSL weekly report on their website ***

A pair of sides remain with perfect records in the VMSL Premier Division after Week 2 and there is a
team on the bottom of the standings who are not at all used to propping up the table!

(**With Match Reports from West Van, Norvan and BB5)

Week 2 began in the VMSL Premier Division with four matches on Friday night.

First up were Inter EDC hosting Norvan at Burnaby Lake. Both these sides were involved in tight, cagey affairs in Week 1, with Inter edging Croatia 1-0 and Norvan scraping out a late 1-1 against VUFC. Perhaps, then, it was little surprise that this match followed a similar pattern with chances at a premium for both groups. Norvan thought they might have an early breakthrough after ten minutes when the man who so often stirs the drink for the North Shore club, Devon Gunenc, slipped a lovely ball into the path of Jurgen Weinczok to send him in behind the Inter defenders. Weinczok provided a composed finish past Chris Zimmerman, who took over in goal this week for the home side, but was left with a head-in-hands moment as the ball rebounded off the post and away from danger. Zimmerman and his counterpart in the Norvan goal, Luka Taylor, were enjoying a rather pleasant evening through much of the match as they were able to handle everything the opposing attackers could muster. Coming out of half time, the match was still scoreless, until a bit of controversy decided the game. Norvan were enjoying possession and building out of the back when Inter’s Zach Ouariti-Zerouali nipped in and stole the ball. Unfortunately, from a Norvan perspective, the only way for him to achieve this was to foul the defender in possession. Norvan felt this was a clear foul, but there was no whistle and Ouariti-Zerouali made no mistake with his finish for the only goal of the night. Naturally, tempers did flair somewhat after this and it was not all sunshine and rainbows for Ouariti-Zerouali on the night as he collected a second yellow card and was sent off late on in the match. It was little consolation for Norvan, though, who felt hard done by to say the least!

Out in Coquitlam, Metro Ford were hosting longtime rival Pegasus, in a classic clash of two of the VMSL’s most storied franchises. This one, though, did not live up to the billing with Coquitlam well in control just about from the off. It took just three minutes for Jovan Blagojevic to open the scoring before Lucas Krivak and Carlo Basso scored within a minute of each other just past the half hour mark. Basso would add another ahead of half time and Gio Baldonero fired home a late fifth to complete the rout, with keeper Dillan Fogliato earning his first clean sheet of the season. It is only Week 2, but warning bells may be starting to sound for Peg who have yet to score a goal and were well of the pace in this one. Meanwhile, Blagojevic’s addition to Metro Ford has seemingly helped return them, at least through two weeks of the season, to their position as one of the league’s juggernauts.

Also Friday there was an entertaining clash between Rovers and Coastal at Newton. Both these teams had suffered losses in Week 1 and both were keen to chalk up their first points of the season. Akash Sharma gave Rover an early lead and that is how things stayed until half time. The real fireworks came in the second half, however, as Coastal exploded for three quick goals after the break. Grant Verhoeven pulled them level before Isaac Kyei, who had been noticeably absent in their Opening Day loss to Coquitlam, notched his first of the season to flip the score line on its head on the hour mark. Coastal talisman Jake Starheim then doubled their lead just two minutes later, but David Chohan almost instantly pulled one back for Rovers before everyone then took a chance to catch their breath! The match was on a knife edge, but Kyei proved just how valuable he can be to this Coastal side when he salted the game away with his second goal of the match fifteen minutes from time. As a result, Ranjeev Aujla scoring in the dying minutes for Rovers proved little more than a consolation as they now find themselves as the only team without a point to their name in the top flight.

On the adjacent field at Newton a heavyweight tilt between BB5 and West Van was being fought out under the floodlights, along with the pouring rain. The early advantage went to BB5 in this one after Ramsey Alfantzi was chopped down in the box and Caleb Clarke cooly slotted home the ensuing penalty to give the Surrey boys the lead inside five minutes. Alfantzi then had a chance almost immediately for a goal of his own after a nice one-two with Yassin Essa, only for Hudson Nelles in the West Van goal to deny him. That would certainly be a theme in the early going of this match, as BB5 seemed to be the team on the front foot with some great goalkeeping by Nelles, along with solid defending by Thomas Arnott and Stef Crameri, the only thing keeping West Van within touching distance. Clarke had back to back chances to extend BB5’s lead in part way through the half, but Nelles was on point to deny him both times. West Van also got a slice of luck when Essa’s effort ten minutes before the break cannoned back off the post. The visitors slowly began to find their legs and were coming alive in the second half when BB5 struck on the counter attack and some lovely build up from Essa and Clarke allowed them to put one on a platter for Nic Morello to finish off and double the lead. Clarke and Morello both had further chances to stretch the lead, but once more Nelles stymied them. The BB5 defense anchored by Elie Gindo and former Canadian international Marcel De Jong held West Van at bay until the final few minutes, when Kam Amini pulled West Van within one and spoiled the shutout bid for Andrew Metcalf in the BB5 goal. West Van pushed hard for a late equalizer to pull a point out of this match, but although they did create a few half chances, there simply was not enough time left. It was a strong
performance from BB5 as they on this night were likely worthy of the three points, and, alongside Essa, midfielder Boris Si was influential for the Surrey side in the win.

On a somewhat dryer Sunday, depending on the time of day and where you were in the lower mainland, a pair of clashes at Burnaby Lake rounded out the weekend. For Croatia, they were looking to bounce back after what could best be described as a tepid Opening Day 1-0 loss to Inter. Standing in their way were a White Eagles team who had nabbed a point to begin their campaign after an entertaining 3-3 draw against BB5. Once upon a time these two clubs were the fiercest of rivals, back when White Eagles were known as “Serbian White Eagles” and both sides were firmly established as mainstays in the VMSL’s top division. Since those days there has been somewhat of a dichotomy between the teams with White Eagles ultimately falling as far as Division 2 before their split with Serbia and a march back up the VMSL ladder. Croatia, meanwhile, have gone on to add the Provincial Cup, in 2014, and the VMSL Premier Division Title, in 2019, to their trophy cabinet. Therefore, success looks very different to these two sides at the minute, with White Eagles looking to make sure they avoid relegation while Croatia will be searching for more silverware. On this day, though, success looked the same for both sides as they each sought a win and the three points. It was all over relatively early, however, as goals by Croatia’s Ivan Salov and James Najman staked them to a 2-0 lead inside 10 minutes. They saw the game out from there with Ty Venhola recording the shutout to provide the perfect tonic for their disappointing start to the season a week earlier.

Rounding out the weekend, the young guns at VUFC travelled to face MAFC in a battle of the two promoted sides from 2020. It was the 2020 Division 1 Golden Boot winner, Sebastian Dzikowski who did the damage for VUFC in this match, first converting from the penalty spot before adding another goal ten minutes later to make it 2-0 to the visitors at the break. Jackson Picard added a third goal just after the hour mark on what turned into a comfortable evening for VUFC. Veteran goalkeeper Chad Bush shut the door to record the clean sheet and VUFC headed back into town 3-0 winners.

And after all of that week 2 action, the VMSL Premier Division standings look as follows: 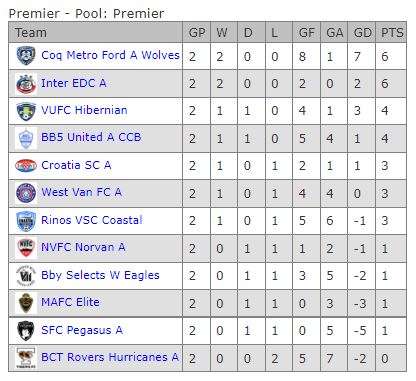 While it is only Week 3 of a long VMSL campaign, Hurricanes certainly will not want to be spending any further time at the foot of the table. To that end, they have a local Surrey derby against a Pegasus side that have also struggled out of the gate. Pegasus have yet to score this season and while that was good enough to earn them a point against MAFC in Week 1, it was most definitely not enough to earn them anything against Metro Ford in Week 2, as they were well beaten.

Like Pegasus, MAFC are also yet to find the back of the net through two weeks and will be looking to change that when they travel to the North Shore to play Norvan, who have only managed a single goal in their two outings. Both those sides sit on one point through two games and will no doubt be keen to nab their first win of the season
and start climbing the table.

At the top, Inter will be fancying a third win on the spin to begin the season on Sunday night against White Eagles, while Metro Ford will have a chance to demonstrate their early season credentials as title contenders with a trip to UBC to face VUFC. There are also really tantalizing fixtures on offer between West Van and Croatia as well as BB5 and Coastal after all four of those teams have had mixed results to start the year.

For complete schedules, as well as the latest scores and standings across all the divisions, visit vmslsoccer.com.