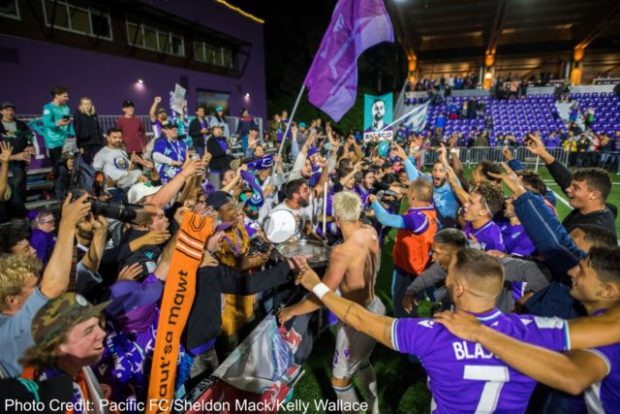 Anyone who was at Starlight Stadium for Pacific FC’s Canadian Championship cupset over Vancouver Whitecaps last month will attest to how electric the atmosphere was in Langford on that momentous Thursday evening.

The metal flooring of the main stand was literally shaking amid a cacophony of noise as feet stomped and shouts abounded from the first kick off to the final whistle, and the jubilant scenes after Pacific secured their win will long live in the memory of everyone in attendance of a purple persuasion I’m sure.

It was a historic win in the club’s short three season history, the kind of which they are keen to savour again, and soon.

That first round victory over Vancouver set up a quarter-final tie with Canadian Premier League foes Cavalry FC this week. A 33rd minute Terran Campbell goal was all that separated the sides, giving the Vancouver Islanders the 1-0 win and setting up a chance to claim another Major League Soccer scalp in the semi-finals, with Toronto FC the next obstacle in their path.

The draw for who will host that semi-final (along with the other CPL v MLS match up between Forge FC and CF Montreal) will take place on Friday afternoon, with the results and dates of the matches set to be announced that evening. Both teams can agree beforehand where the tie should be played, but if they both want to host, and why wouldn’t they considering the importance of the match and the travel involved, then a coin toss will take place to decide the home team.

But as far as Pacific FC head coach Pa-Modou Kah is concerned, it shouldn’t even get to that point and the Canadian Soccer Association should be stepping in to award home field advantage to both Canadian Premier League clubs.

“If I’m Canada Soccer I would definitely let the game be played in Starlight Stadium,” Kah told us after the win over Cavalry on Wednesday evening. “For us as a CPL community, we deserve it, we’ve proven it. We have two teams in the semi-finals against two team from MLS. I think we totally deserve to have this game played at Starlight Stadium.” 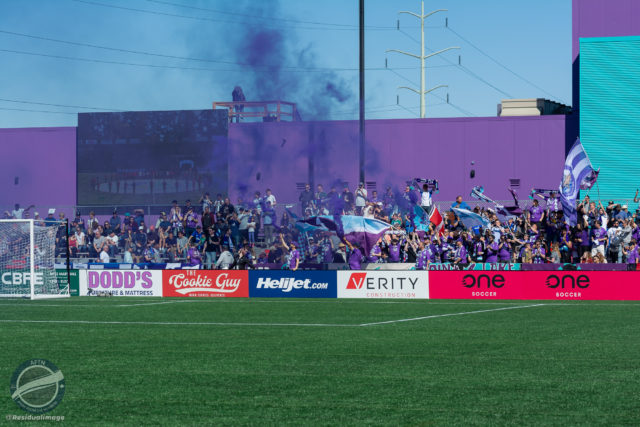 And it’s hard to disagree. A Covid capacity crowd of 4,997 packed into Starlight for that win over the Whitecaps. A semi-final against TFC would see the same again, and perhaps more depending on local guidelines.

In contract, Toronto could only muster 3,651 fans at BMO Field for their 4-0 quarter-final win over CPL side York United. A figure well shy of the 15,000 crowd current restrictions would allow.

Now there were certainly reasons for that low crowd. The weather was atrocious, it was a game against a lower league team, TFC aren’t exactly setting the heather on fire right now in terms of excitement, and available ticket prices were reported to be primarily at the $50 plus range, which is shocking for a game like that.

But numbers are numbers, and even if they could improve on that low figure for the semi-final, the atmosphere and excitement generated in a packed, intimate stadium would be far better than anything a sparsely populated 30,000 seat stadium would generate. A point not lost on Kah, along with the opportunity such a game provides for growing the sport in communities outwith the three big cities in this country.

“I think just for the atmosphere, but also what it would mean to soccer in Canada,” Kah added. “We do deserve to have this game at home, because as we saw today, BMO Stadium was not even full and if you want to promote Canadian soccer, we need to have the stadium full. Hopefully they realise that and give us this game at home and I think we truly deserve it.”

The semi-finals were originally pencilled in for next week, but with TFC at home to FC Cincinnati on Wednesday that won’t be happening, leaving the most likely option being the game getting played over the Thanksgiving weekend. Not a scenario beneficial to TFC as it will fall during the international break, but one which is a potential boost to Pacific. Factor in home field advantage and you’d have to have them as favourites going into such a game.

This already feels like a special season for Pacific. The Canadian Premier League leaders are looking almost assured of a playoff spot and are one of the hot favourites to lift the 2021 North Star Shield. Now they can realistically set their sights on more than league success, with an eye on lifting the Voyageurs Cup and clinching a spot in next year’s CONCACAF Champions League.

Starlight Stadium, you feel, will certainly be bouncing once again before this year is out.