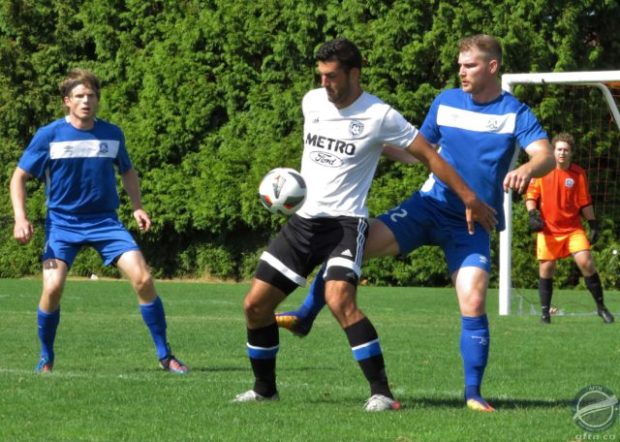 The Vancouver Metro Soccer League (VMSL) is back with a bang. The opening weekend of the new 2021/22 season threw up six entertaining matches in the Premier Division, with all 12 teams in action at Newton Athletic Park in Surrey on Sunday afternoon.

It was the first action in the league since last November, but the players didn’t miss a step, producing 18 goals across the six keenly contested games. With three of the matches ending in draws, Coquitlam Metro Ford Wolves, West Van FC, and Club Inter came away as the only winners, as the scene is set for what is sure to be a close, and exciting, season.

The action got underway at Newton with a pair of noon kick-offs on the two grass fields, which were in excellent condition despite the overnight rain, but certainly started to show some wear and tear after 270 minutes of football on each.

There was a five goal cracker to start things off on Field 10, as West Van looked to be comfortable and in control against BCT Rovers Hurricanes, before being pegged back then coming back themselves to take all three points. 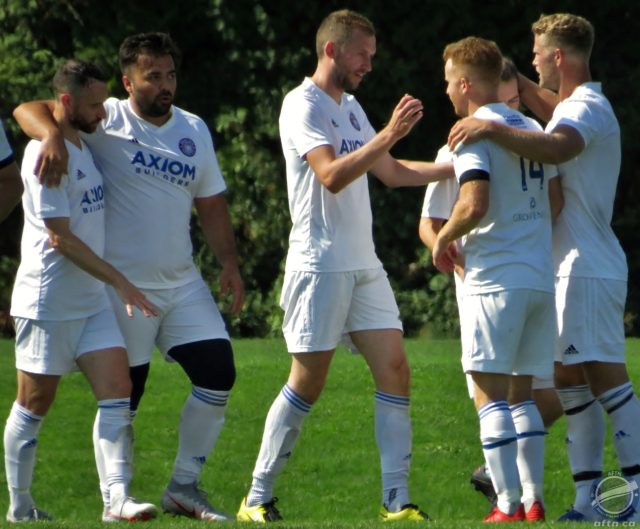 Lloyd Massey struck the first goal of the new VMSL Premier season to put West Van up five minutes in, and when Alan McIndoe doubled their advantage in the 17th minute they Amblesiders looked to be in for a fairly comfortable day at the office, but that was to be far from the case.

Both teams had goals disallowed to see out the first half, before Nick Soolsma got the Hurricanes back on level terms with two goals in a ten minute spell to tie things up by the hour mark. It was now anyone’s game.

The winner came with 11 minutes remaining when McIndoe grabbed his second of the afternoon, but there was still time for some late controversy when the Hurricanes looked to have won a penalty in stoppage time, but the referee waved play on and blew his whistle for full time seconds later to send West Van home with the 3-2 victory.

It was a strong start for West Van, who are one of the favourites to land the title this season, and with McIndoe already in form they will be looking to build on this win when they head back to Surrey on Friday night to take on BB5 United at Newton Stadium (Kick off 9.15pm).

The Hurricanes can also take a lot from the match, and may be more competitive this season than some had predicted. They will need to have more than Soolsma scoring to get there, but next up for them will be Rino’s VSC Coastal at Newton on Friday night (Kick off 8.45pm).

Their next opponents were in action on the adjacent field on Sunday in one of the more intriguing opening fixtures when they took on Coquitlam Metro Ford Wolves.

Coastal made the jump to the VMSL from the Fraser Valley league this year and were originally pegged to be in Division 1 before merging with Rino’s and taking up a spot in the Premier. How they would fare was a burning question going into the season, as was how their opponents would look after sitting out the short-lived Covid Cohort Cup season last year.

On the basis of this match, Coastal may have a tough time of it, while the Wolves looked impressive in a 3-1 win.

Metro Ford dominated the early going, creating a number of chances and cracking one off the post before finally taking the lead in the 26th minute from a Juan Sanchez free kick.

Coastal started to come more into the match, but Coquitlam kept the pressure on and nearly doubled their lead a minute before half time, but Carlo Basso’s volley crashed off the bar. They weren’t to be denied though and grabbed a second two minutes into stoppage time when Devin Phelin scrambled the ball home from a free kick with the last action of the half.

Both teams had some half chances in the second half, but struggled to create any real clear cut chances. Coastal gave themselves a lifeline with two minutes remaining when Cameron Kamensek fired home, but any comeback thoughts were soon forgotten when Basso scored a third for Coquitlam two minutes later to secure the three points.

You watch our video highlights from the match below:

Coquitlam’s two goal victory was the biggest win of the weekend and they’ll look to build on that performance with a home game against SFC Pegasus at Coquitlam Town Centre on Friday night (kick off is 8.15pm).

The Horsemen played out a 0-0 draw with MAFC Elite in their first match of the season on Sunday.

Both sides had their chances but couldn’t break the deadlock, with Pegasus’ Marc Mincieli and MAFC’s Shahriar Taheri recording the clean sheets. 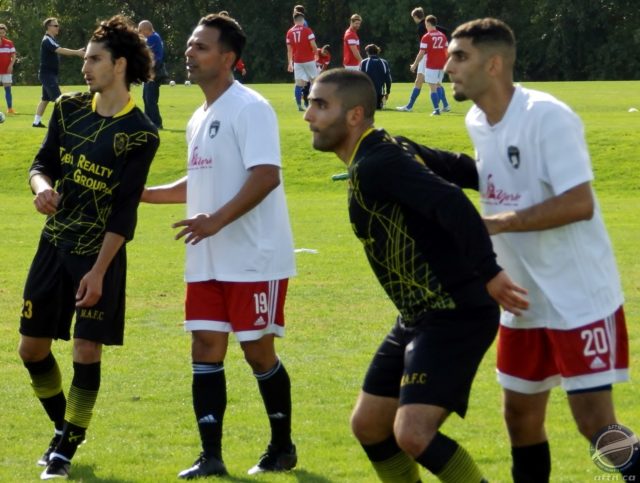 With two, and potentially three, teams facing relegation from the Premier this season, every point earned and every one dropped could have big implications for both of these teams come season end.

MAFC now head back home to Burnaby Lake this Sunday to take on VUFC Hibernian (kick off is 6.00pm), with Pegasus heading to Coquitlam on Friday night.

The highest scoring match of the opening set of fixtures saw an entertaining six goal thriller between Burnaby Selects White Eagles and BB5 United, that saw the Burnaby boys go out into a two goal first half lead before being pegged back by the Surrey side in the second half. BB5 then thought they’d won it before being pegged back themselves with the last kick of the match and both teams had to settle for a point apiece in the 3-3 draw. 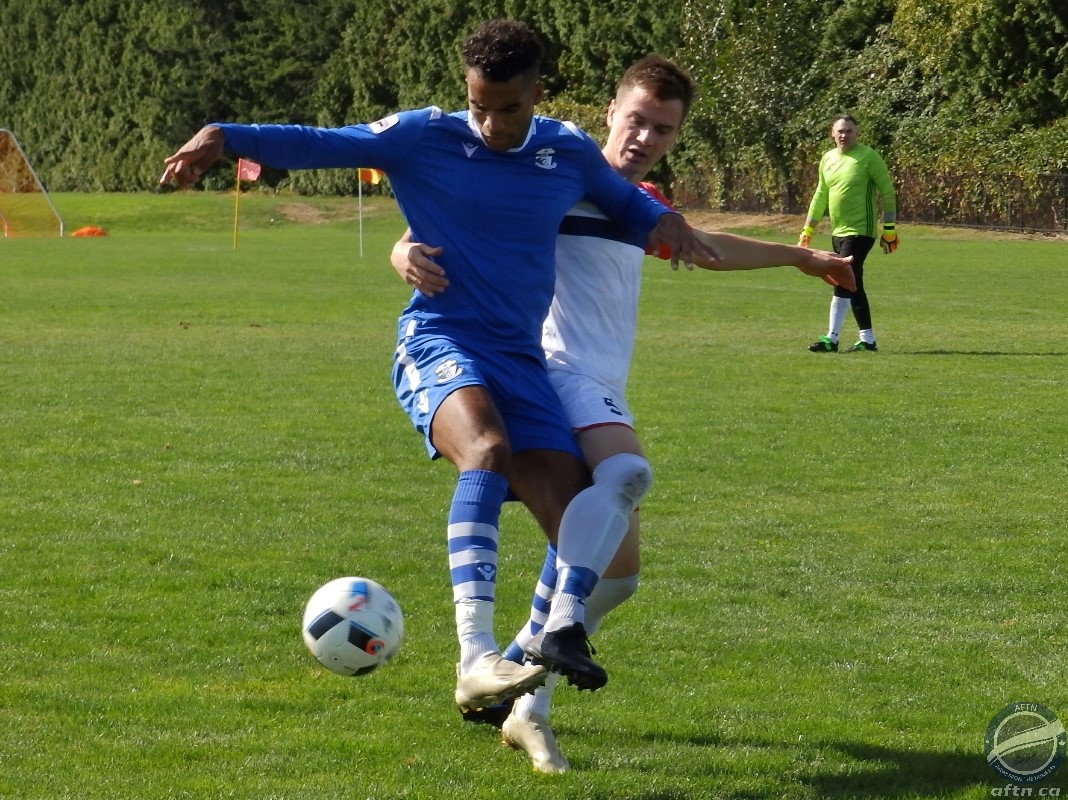 Parker Ellis opened the scoring for the White Eagles with just five minutes gone after being played in and rounding the keeper to tuck the ball home. BB5 were unfazed by going behind and enjoyed the far better play for the rest of the half, creating a number of chances they were unable to finish.

But right on the stroke of half time, the Burnaby side doubled their lead when Daniel Pervan poked the ball home from close range from a corner.

BB5 came out strong to start the second half, but the White Eagles defence was dealing fairly comfortably with everything that was being thrown at them. They were finally breached though just past the hour mark in controversial circumstances.

As BB5 kept the pressure on from an earlier attack, the ball was played back into the box. Elie Gindo was in an offside position as the ball came in and amid shouts for him to leave it, he seemed to motion towards the ball. As play continued, the ball fell to the back post before being cut back for Gindo to fire home, drawing the flag to go up from the linesman.

Both teams stated their cases, the officials conferred, and the goal was allowed to stand, much to the anger of the White Eagles.

BB5 now sensed they could get back into this and they not only did that. they went ahead after a six minute double from Caleb Clarke in the 77th and 83rd minutes.

But the White Eagles weren’t finished yet and they earned a point with the last kick of the game when Vladyslav Matlash fired home a free kick to stun the Surrey side and make it 3-3.

You can see our highlights from the match (minus the first goal due to camera issues) in our video highlights below:

BB5 will look at this one as two points dropped, especially after coming back to take the lead, but they were missing some of their key players for the season and will be one of the title contenders come the end of the campaign.

They face a tough battle on Friday when they host West Van at Newton, in what should be the match of the weekend.

The final pair of matches on the opening day produced the third winner of the weekend, with a 27th minute goal from Huthayfah Mohiddin giving Club Inter EDC a narrow 1-0 win over Croatia SC. 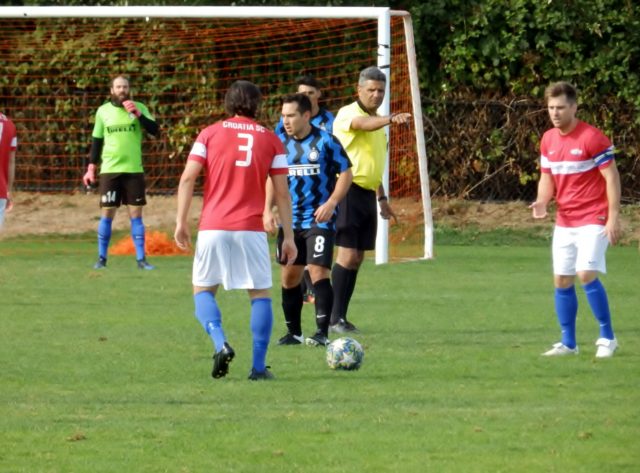 Norvan came away with a point from their opening day fixture with VUFC Hibernian after being under the cosh from a dominant first half performance from the UBC based side.

The Hibs had a first half goal disallowed, and were left to rue a slew of missed chances as the sides headed into the break goalless. They eventually got the goal their play deserved through Milai Hodut seven minutes after the restart, but a Devin Gunenc equaliser five minutes from time gave the North Shore side a share of the spoils in a 1-1 draw. 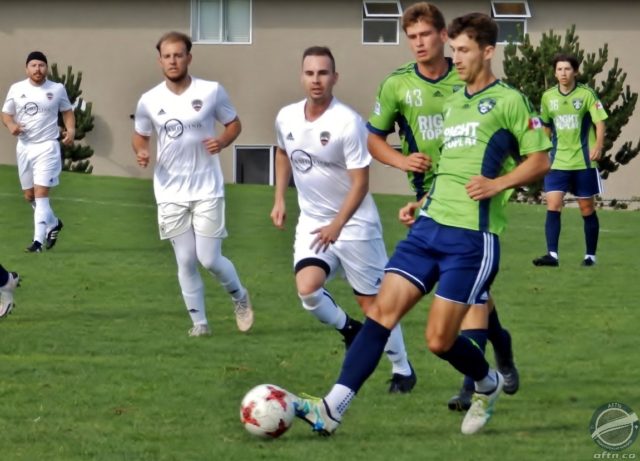 You can find all the results, fixtures, and standings from across all of the divisions at VMSLsoccer.com. You can also find the rest of our photos from the opening weekend on our Flickr page HERE.