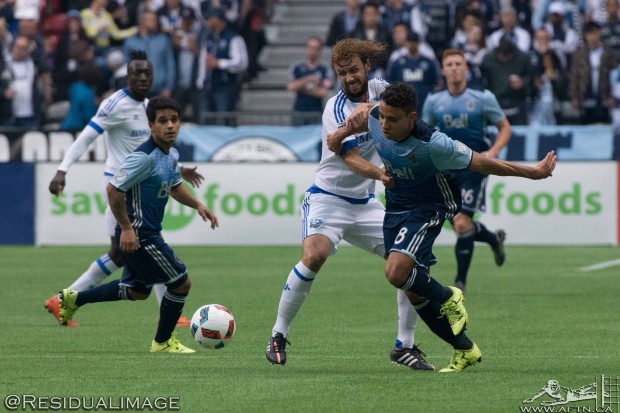 Vancouver Whitecaps’ First Kick clash on Sunday against Montreal Impact was a clash of 4-2-3-1 formations. As we know from last season’s Whitecaps, the 4-2-3-1 gives lots of attacking freedom, but can lead to defensive overloads if match-ups are not chosen carefully.

The initial strategy of Montreal seemed to be to test both fullbacks. It turned out to be a wise tactic.

On Jordan Harvey’s side, Lucas Ontivero found space despite Cristian Techera tracking back, but every time he tried to turn inside he was faced with Matias Laba, who fouled him a couple of times.

The alarm bells began to ring on the other flank. Fraser Aird had trouble dealing with Harry Shipp and Ambroise Oyongo, and he was getting no help from Christian Bolaños, meaning he was faced with 2-on-1 situations more than he would have liked.

The other factor on that right side for the ‘Caps was that it was Kianz Froese’s midfield spot. Froese played a box-to-box midfielder role, which meant he wasn’t always able to get back in time to do his zonal defensive duties. Once the Impact noticed this, Nacho Piatti spent almost all his time on Aird’s flank, working closely with Shipp to break down the ‘Caps. This then led to through balls from Piatti to Dominic Oduro or crosses into the box from Shipp and Oyongo.

We saw that Piatti to Oduro combination three times in the first half hour, with each pass going between Kendall Waston and Aird. The Montreal Impact almost exclusively went down this side from then on, and it led to both goals in the first half.

The key was Piatti drifting from his central position to the left, with Shipp sometimes dropping into the space behind the advanced Froese. Laurent Ciman also played left centre back to help the build up play. 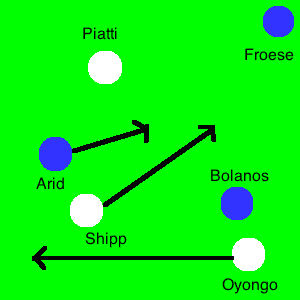 The Whitecaps found most of their success with the long ball game, Tim Parker to Octavio Rivero being the ball of choice in the first half. This combination actually had more than a 50% success rate and was possible because Rivero chose his matchup to be Victor Cabrera instead of the brilliant Ciman.

I’m struggling to remember a successful exploit involving Bolaños. The ‘Caps seemed to prefer to build attacks on the left side with Techera and Harvey. This flank led to many successful ventures for Vancouver, like Rivero hitting the bar and a few other clear cut chances.

Bolaños and Techera switched wings on the 30th minute, which didn’t really change much going forward. Notice that Harvey’s goal came from Techera winning a free kick on the right side at the end of the half. Bolaños showed a reluctance to use his full back as a support, which means Aird was limited in opportunities to show us his well-known attacking qualities.

The second half saw the ‘Caps try to stage a revival. The only tactical tweak was that Laba and Froese switched sides in the defensive midfield position. This successfully neutralized the Piatti threat on Aird’s side with Laba’s experience and tactical fouling.

Piatti still broke through that side a couple of times even after being shoulder barged by Laba, but he was having an unreal game in general.

I believe that this midfield switch should have been done earlier, as it was obvious that the Impact were going for that side and that Froese is not defensively experienced enough to deal with someone the calibre of Piatti. The Montreal captain had the freedom of the right flank for most of the first half, which directly led to the two goals which put the Impact out of sight.

I do not, however, think it is a problem that we will see very often; players like Piatti are rare, and without the savvy of Shipp to work with, this could not have happened. Not all teams are as gifted as Montreal, which is why I think they could go deep in the playoffs this season.

The good news for Vancouver was that they created a lot of goal-scoring chances. They forced Evan Bush into 10 saves, some of which were quality goalkeeping.

Pedro Morales and Techera were pretty sharp, although Pedro made one or two bad decisions. Parker and Waston looked generally solid. Parker showed tidy passing at times too. Laba didn’t have his best game in a ‘Caps jersey but was still effective, and Froese played the box to box role very well. Rivero had a brilliant game, and would have scored given a bit of luck. Good see him making those chances.

So the message to take from the first game of the season? No need to panic just yet folks.