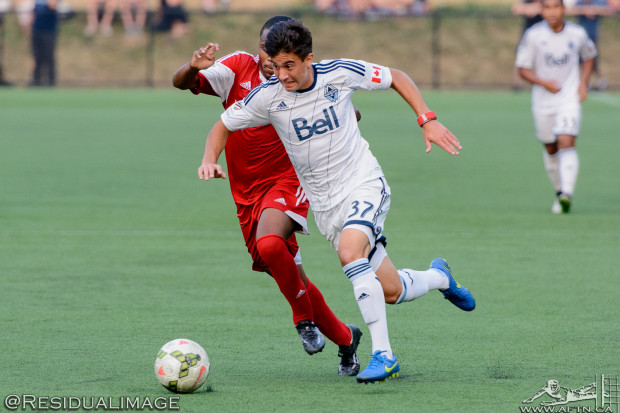 For millions of football playing kids across the globe, they all share the same dream – to be a professional footballer for the club that represents their home city. Most of the kids never get the opportunity, but every time they are on a field with a ball they can see it – wearing the home team kit, winning the game with a 90th minute goal to give themselves, their hometown and their favourite team the championship.

That is the dream for current Vancouver Whitecaps Residency player Nicolas Apostol. The U16 captain has worn the colours of the Whitecaps since he was 8-years-old. That was when himself, along with current USL player Kadin Chung, were part of the ‘Caps prospect program. From 2008, Apostol trained in the prospects program under Bart Choufour and played his youth soccer with local side Surrey Guildford United.

That same year, 2008, another player joined the Whitecaps Residency program, Russell Teibert, and Apostol is now one of the longest serving players in the Whitecaps organization.

Apostol has seen a lot of players come and go through the Residency program in that time, continuing to improve his game and excel along with the program. His journey has taken him from his home town of Surrey, BC to the Whitecaps world class Residency program, and he is hoping the ending takes him not more than 40kms away from where it all started, at BC Place Stadium.

And Apostol is the subject of AFTN’s latest “Ten Count”.

AFTN: Having been a part of the Whitecaps since 2008, you’re one of the longest serving players at the club. How have you seen the club’s youth program and your own development change during that time?

NICOLAS: Having been at the club for so long, I’ve witnessed first hand all the players who have been part of the club and the ones who left. The youth programs are expanding and developing in the right directions, as soccer is still rising in Canada. Teams from the U.S. have always been our competition and, since the youth academy days, we’ve performed well against these teams. To prove how well this club has developed since 2008 is quite clear, and that shows in the Western Conference as we stand in 1st place.

I started playing as a forward, I’ve always been an attacking player. This club has taught me to be able to play well no matter what position is needed. I’m able to now do better defensively as I can drop into the fullback roll when needed and it has also enriched my attacking abilities as a forward at heart.

The quarter final playoff loss on penalties for the U16s last year was heartbreaking, but how does going through that toughen all the players like yourself up for what lies ahead in your footballing career?

It was fantastic to see family, friends and supporters come out and see what the Residency is all about. It’s always tough losing in penalties because you never really know which way it can go. A misplaced shot or a great save can be the difference between going through to the next round or getting knocked out of competition.

Last year was a very important part of my development. It was a time where I was one of the younger players on the roster and I had to compete and train to the best of my ability to get minutes. Although in the quarter finals I didn’t start, I was buzzing from the second the whistle blew. It’s important to stay focused and be ready to make an impact when you get your chance. So after 90 minutes, the score was 2-2, and it was my turn to get on and make an impact in over time. I’ve created opportunities but sometimes the game doesn’t always go your way. After 120 minutes of football the game was decided through penalties and Georgia went on into the semi-finals. It really was devastating, all the hard work we’ve put in throughout the season had to end early for us. It was the most painful loss I’ve had in all of my career. It’s important now that we gained the experience and make sure we use it this season.

At the end of the day, someone has to lose. I’m sure there will be bigger and tougher games in my career and its how you prepare yourself as an individual and as a team to perform in big games. Sometimes the better team can come short and its how you react to the loss that defines you as a footballer. 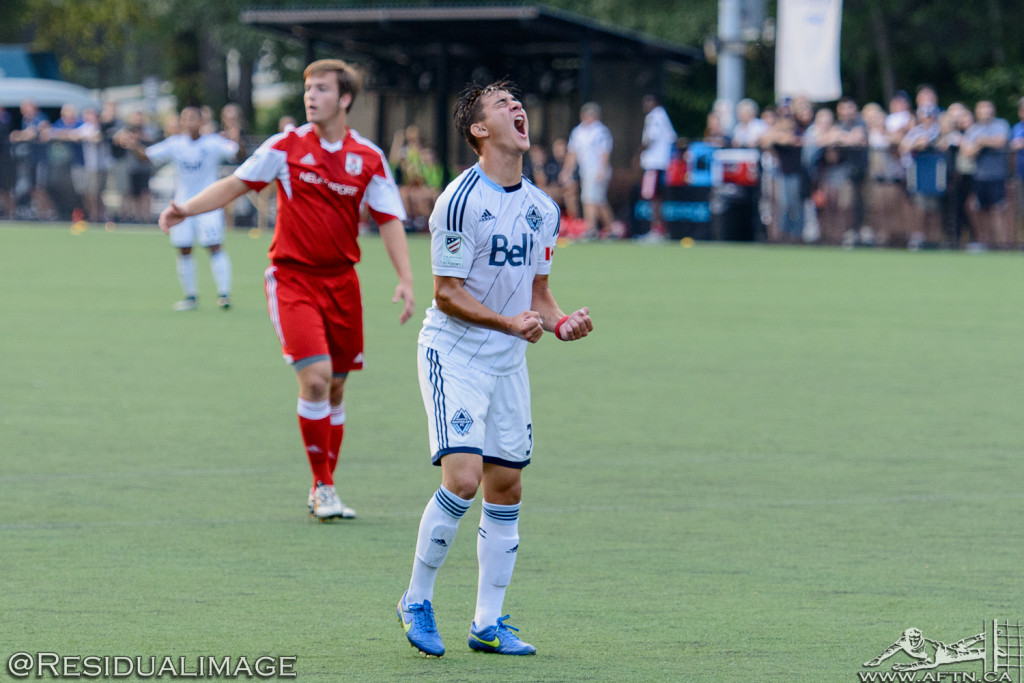 Yourself and Russell Teibert have both been a part of the Whitecaps organization since 2008, what kind of role model has he been for you as you’ve watched him go from Residency to MLS first team?

Russell Teibert, what a machine. The man runs non stop. His work ethic is unbelievable, one thing he can promise you is he’ll always put in a shift. Russell is a player who showed a lot of promise through his Residency development and has earned himself first team football. The fact that he’s been here just as long as I have gives me the belief that it is possible to play first team and international football.

What would it mean to you to sign a professional contract with the Whitecaps?

When you ask many young players where they want to play they’ll say Barcelona, Real Madrid, Manchester City. Don’t get me wrong, it would be unbelievable to play for giants like that, but I want to play for Vancouver Whitecaps.

Vancouver is my home and it’s where I want to play my football. It’s where it all began. My dream is to play at BC Place one day in front of my family and friends because I think it doesn’t get much better than that. So for me to be offered a contract here at Vancouver Whitecaps, it would mean the world to me.

You have seen a lot of players come through the Residency program, who is the most talented player you have had as a teammate?

Kadin Chung and I both started playing for the Whitecaps Prospects in 2008, when we were both selected as training players under coach Bart Choufour. At the time Whitecaps did not have a Residency program. To see how much Kadin has improved and developed as a player is great. I see him as a role model to all the players in the Residency. I can’t wait to see what else he has to offer the club and hopefully see him pushing into MLS.

What are your on pitch and off pitch goals for 2016?

My on pitch goals:

Having a bigger role in this years U16 side as captain, it’s important to encourage my teammates, as well as being able to have a good connection and bond with each individual. Secondly, I want to help lead this side to a championship and make Residency history. I believe this club has the quality it needs to win a championship, especially after beating Dallas FC, who are ranked first in North America.

My off pitch goal this season is trying to stay injury free and to stay as fit as possible so that I can continue to improve physically as competition gets harder as the season goes on.

You have recently had the chance to wear the red and white, what did it feel like to represent Canada?

Couple months ago I had the opportunity to wear the red and white for the first time. It’s truly an indescribable and overwhelming feeling. What better way to play my first international game than in a US clash? The rivalry between the countries makes the game that much more exciting and of course my mom and dad wouldn’t want to miss it, so they surprised me by flying down to LA for the game. It always gives you that extra belief and confidence knowing the ones that support you most are there cheering you on.

What player on the MLS first team would you mostly compare you game to?

To be honest I wouldn’t compare myself to anyone in first team. I have a very different style of play. I can play anywhere in the midfield and I play my fair share at right wing and right fullback. I’d say I’m an attacking minded player that enjoys to defend. Which is why I believe that my dynamic ability is valued so high in the Residency program.

Your bio lists the teams you support, so the burning question from that is how can someone be a fan of both Liverpool FC and Manchester United FC, considering their fierce rivalry?!

I grew up watching Liverpool play with my dad. We are both huge fans of the Reds. I love everything about Liverpool. The atmosphere the supporters bring to Anfield gives me goose bumps. They’re a passionate club that believes in young talent.

I wouldn’t necessarily say I’m a Manchester United supporter, but I appreciate what the club offers to the football world. My brother is a massive Manchester supporter and I’ve been watching them play throughout my youth with him. It definitely gets really heated between us when the clubs meets for a derby.

Where do you see yourself in your football career in 5 years time?

I want to see myself playing here in Vancouver, but it’s difficult for young players because some doors can close and some may open up. For now I’m focusing on my development here in the Residency and see how far I can take myself through the club.

Thanks to Nicolas for taking time to chat with AFTN. Make sure you give him a follow on Twitter – @Nick10_a.