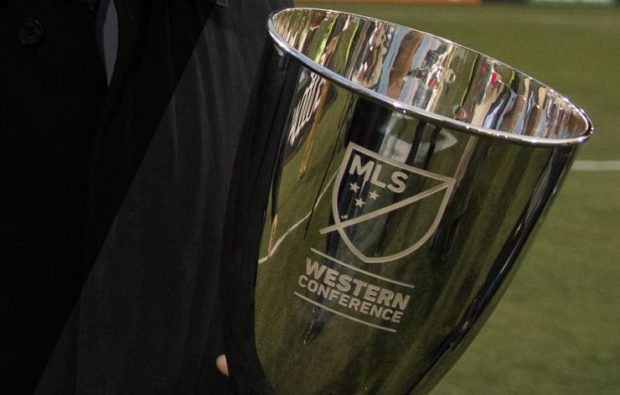 MLS returned with a bumper crop of weekend action. The television ratings will be interesting for sure. Have the Euros and Copa America left the viewing public clamouring for more football action or has that quality early morning and afternoon been enough to satisfy their cravings and they’ll spend the rest of their time outside enjoying the weather?

Some team looked like they were just back from a break, others looked sharp and impressive, but on the whole it was just nice to see everyone playing in their proper colours again. Here’s how the weekend’s action played out.

All 13 teams in the West were in action this weekend, with RSL v Vancouver getting things underway on Friday night, but we don’t want to talk any more about that!

Here’s how the rest of the Conference played out:

CINCINNATI 0 – 2 COLORADO – The only East v West match-up of the weekend kicked things off on Saturday, with the Rapids coming away with a comfortable three points as Cincy’s woes continue. They peppered 22 shots on Colorado’s goal, facing only 7 in return, but the Rapids put the ball in the back of the net and that’s all that matters.

The home side were denied by the woodwork, Rapids keeper William Yarbrough, defensive blocks, and just poor shooting, but in the end a first half finish from Diego Rubio and a neat second half goal from Jonathan Lewis saw Colorado leave with maximum points. Michael Barrios now has assists in three straight games, and proving to be a great offseason addition.

DALLAS 1 – 1 MINNESOTA – The points were shared in this one, which served up 33 shots between the teams, with Minnesota leading the way on 18, with eight on target to Dallas’ four. The visitors were the better team in the first half and took the lead in the 36th minute when Franco Fragapane fired home a rebound after a Jimmy Maurer save. They nearly added a second moments later, denied by another Maurer save, but had to settle for a one goal lead.

It was a different story in the second half, as Dallas came storming back and after a couple of good chances, 18-year-old homegrown forward Ricardo Pepi hit a 68th minute equaliser after a nice passing move. Minnesota had the better chances to win it, but could find another way past Maurer, who was excellent for the home side in this one.

AUSTIN 0 – 0 SAN JOSE – The long awaited first MLS match at Austin’s new Q2 Stadium may have produced no goals, but it was a fairly entertaining affair, primarily in the first half, and pretty even, with a draw likely the fair result in the end. That said, Austin keeper Brad Stuver was the man of the match, denying the Quakes on the best of their goalscoring opportunities. Both teams had some close calls, but there was nothing to send the sold-out 20,500 fans in attendance into delirium.

LA GALAXY 1 – 2 SEATTLE – A highly entertaining first half was followed by a pretty dull and disappointing second. LA took the lead in the 21st minute when Sacha Kljestan fired home from the spot after Chicharito went down in the box, but Seattle fought back with goals either side of half time.

Yeimar Gomez struck four minutes before the interval and Raul Ruidiaz four minutes after it for Seattle to deservedly take all three points and keep their unbeaten record intact, the only one now in MLS.

The Galaxy now head to take on Vancouver on Wednesday night in Utah. Their attack can definitely cause the Whitecaps problems, but the Sounders defence showed how to negate them in the second half where they were barely a threat at all. Something for the ‘Caps to study and replicate if they can.

PORTLAND 2 – 1 KANSAS CITY – A packed Piggy Park was served up a cracker. KC took the lead when Jaylin Lindsey fired home a beautiful 28th minute opener, but Portland tied things up eight minutes later when Dairon Asprilla buried a low one from just inside the box past Tim Melia. As the game ticked into first half stoppage time, Marvin Loria gave the Timbers a lead with almost the last kick of the half, tapping in after a horrible defensive slip from Lindsey. From hero to zero!

KC dominated the second half, laying siege to the Timbers goal but squandering a number of great opportunities. Sebastian Blanco made his return to a rapturous reception late in the game for Portland after being missing since September with a torn ACL. Alan Pulido had a good chance to earn a point for KC in stoppage time but fired into the side netting and Portland held on for a big three points.

LAFC 1 – 1 HOUSTON – The Western action wound up with the final game on Saturday evening and it was a first half snoozefest, with no shots on goal mustered by either team, and no shots at all coming from the Dynamo. LAFC had more urgency right from the start of the second and took the lead when the ball came through to a wide open Jose Cifuentes at the back post from a corner and he made no mistake from close range. Then from nowhere, Houston found themselves back level in the 59th minute when Maxi Urruti got off a shot while surrounded by three LA players and it was suddenly 1-1. Urruti nearly added another within seconds of the restart but saw his effort tipped over and despite LAFC’s looking for a late winner, that was all she wrote.

Those results see Seattle still sitting comfortably atop the Western Conference standings on 20 points, unbeaten and now with a four point lead over second-placed Kansas City. Colorado Rapids are a point further back in third and the LA Galaxy one point further back of that. Vancouver drop to second bottom (or joint bottom if you want to be really pessimistic) with FC Dallas. Both teams sit on seven points from their eight matches, five points out of the playoff places now.

FC Montreal saw their break extended by a few extra days, the only team that received a bye this weekend leaving Toronto FC as the only Canadian side in action in the East this weekend. They’ll probably be wishing they hadn’t been.

TFC came out on the wrong end of an entertaining five goal encounter as they hosted Orlando City in their own stadium. And it was a Canadian that grabbed the game’s opening goal in the first minute. Unfortunately for TFC it was Orlando’s Tesho Akindele that got it, and they doubled their lead in the 8th minute when Nani fired home.

But Toronto came storming back, reducing the deficit to one when Ayo Akinola scored from close range two minutes later, and they found themselves level six minutes before half time when another Canadian, Jonathan Osorio, fired home.

The second half lacked the same excitement and just when a share of the points looked on the cards, Junior Urso struck in the 84th minute to grab all three points for the ‘visitors’.

Elsewhere in the East, Nashville’s unbeaten record fell in a 2-0 loss at New York Red Bulls on Friday night, while New England got past the other side from the Big Apple, NYCFC, 3-2 on Saturday with Canadian Tajon Buchanan getting the assist on Tommy McNamara’s 88th minute winner to keep the Revolution at the top of the standings.

The Revs have a five point lead over Orlando and Philadelphia, the latter of whom could have claimed second on their own if they could have got the win against Atlanta on Sunday. That game was a cracker, with the Union fighting back from two down with seven minutes to play, earning a battling point with a golazo from Jakob Glesnes three minutes into the stoppage time. The goal of the weekend!

The East as a whole is still tight, with just a single point separating the six teams from NYRB in 5th on 12 and Nashville in 10th on 11 points. TFC, Chicago, and Cincinnati are slowly getting cut adrift at the bottom.