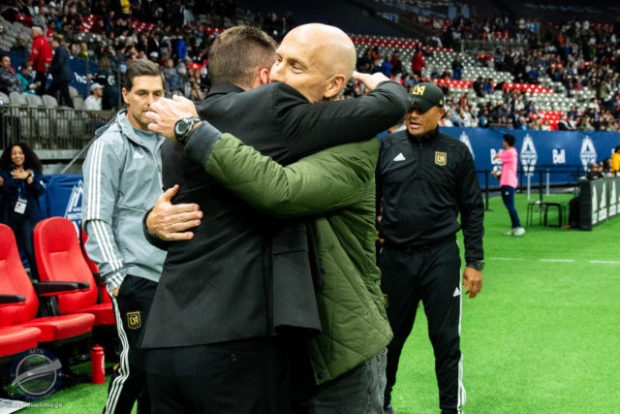 When Bob Bradley was appointed LAFC head coach in the summer of 2017, he installed Marc Dos Santos as his assistant a few months later, following the Canadian’s NASL Championship success with San Francisco Deltas.

Dos Santos spent one year working under Bradley in LA before making the move north to take up the reins in Vancouver, with the pair quickly forming a bond based on mutual respect and their passion for the game. And the LAFC coach can’t speak highly enough of what Dos Santos brought to his team, validating the reasons he brought to him to the City of Angels to begin with.

“I had watched Marc’s teams play and I’ve coached some players that played for him,” Bradley revealed on his pregame conference call on Tuesday. “All of them spoke highly of his leadership, of his understanding of the game, the way he conducted training sessions. I reached out to him and we had a really good football conversation.

“Everyone here, we really enjoyed working with Marc. He’s a great guy, he’s funny, and his passion for the game is there every second. I had heard all those good things and having him here only proved the comments from the other players were spot on.”

After taking a win apiece against each other last season, the coaches will meet again on Wednesday night in LA. But while this is a meeting between two coaches that know each other’s games and styles so well, both of their teams are somewhat of a Jekyll and Hyde proposition right now.

LAFC have won just two of their seven matches since returning from the MLS is Back tournament in Orlando, and just one of their last four.

When they win, they seem to do it in style, with a 5-1 victory over San Jose and a 4-2 win against Portland. When they lose, it’s been ugly with their three most recent ones all being by a 3-0 scoreline.

Both of their recent victories have come at home, which will certainly be a concern for Vancouver, but can the Whitecaps really know what kind of LAFC side they’re going to be facing tonight?

“I know exactly the team we’re going to face,” Dos Santos feels. “I know that their football doesn’t change. A team with a lot of play inside, with a lot of possession, a lot of creativity. A huge reaction to the loss of possession. The moment that they counter press and they lose the ball, that’s all going to be there. I have a huge respect for what they’re about, for what they do, for the talent they have in their roster.

“In soccer, the only thing that matters is the 90 minutes that day. Everything before that and everything that was done before doesn’t count. We expect a LAFC team motivated, a LAFC team that wants to win, the same like us. We will be ready for them and I’m sure they’ll also be ready to show up and play because I know how their organization goes about things and how Bob goes about things.” 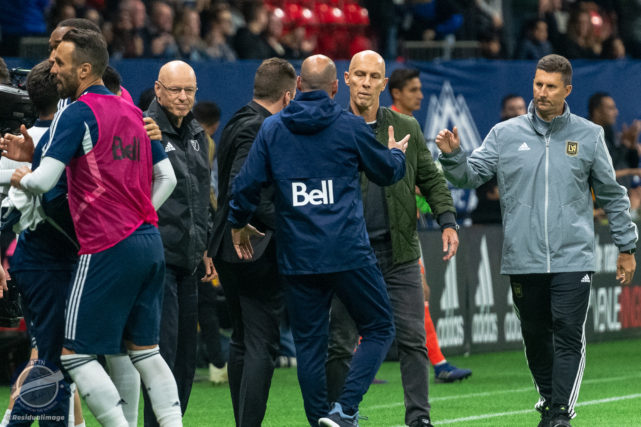 While LAFC are currently struggling, sitting below Vancouver in the standings and currently out of the playoff places, the Whitecaps come into the Banc of California in confident mood after recording back to back wins against Montreal and Real Salt Lake.

Their performances have also seen peaks and troughs, with a lot of line-up changes, as Dos Santos tries to find the winning formula to take the team through an intense run-in to the season. Certainly a challenge to prepare for, for Bradley and his coaching staff.

“First and foremost, I know that Marc prepares his teams tactically very well,” Bradley said. “They have different ways of playing, with different ideas. So we will need to see how they choose to go about this game. We certainly know of late that there’s been some confidence in their team.

“There’s been a good couple of games from Fredy Montero, back making a contribution. It’s always an interesting game with Vancouver because tactically Marc has different ideas to prepare his team for whatever he thinks needs to be done against the opponent.”

For Dos Santos, how they go about this, and upcoming matches, it’s all about finding the right balance.

After failing to score any goals during August’s three game eastern Canadian road trip, they’ve responded with 10 goals in their last four matches, recording three victories in the process. Lucas Cavallini, Cristian Dajome, David Milinkovic, and Montero have produced five goals and five assists between them in those two wins. It’s an attack that is finally clicking and looks to be a real threat.

The problem Dos Santos now faces, however, is making sure he can get that front four on the pitch, while keeping a midfield shape, ensuring defensive responsibilities, and keeping things tight at the back. Eleven outfield players would help, but sadly that is not allowed and he has to just find the solution with ten. It’s risk v reward.

“You have to take a little bit of risk,” Dos Santos believes. “In soccer if you take away something, you lose in another side. Look in the end [in the last four games], we scored three, plus two, plus three again, plus two again. But it’s something that definitely needs to be addressed… It’s going to be a balance, but I don’t want to take away what the team believes in also.

“We have pieces that can be dangerous, exciting, and we have to find the balance and we have to work on it, because I think that we could still defend much better with the attacking pieces we have. I don’t want to be in a position that we have to take one of these attacking players out just because we’re scared of other areas. I prefer that we try to solve the game with goals when we can.”