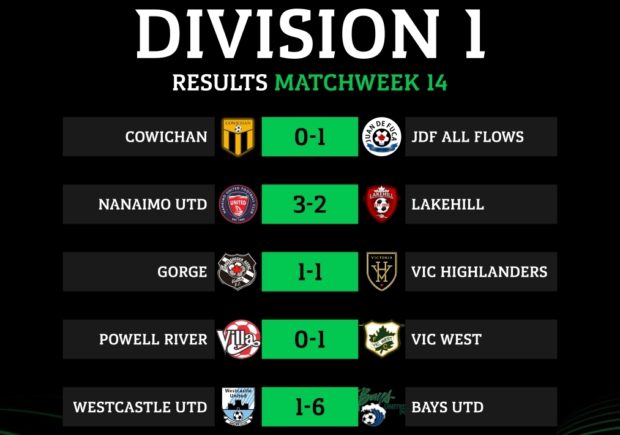 Week 14 of the Vancouver Island Soccer League (VISL) Division 1 season is in the books, and to say there were a couple surprises is an understatement.

The second to last weekend of top flight amateur soccer play on the island for 2021 was one of heartache and upsets – what a difference a few minutes makes!

Friday night started the weekend off with a couple “upsets”.

Juan de Fuca went into Cowichan and left with the full three points after a goal at the 87 minute mark. Kane Johnson had that lone goal of the night for JDF and securing his third shutout of the year, and preserving the upset, was goalkeeper Cody Carter.

Friday also saw Nanaimo topple the previously undefeated, and league leading, Lakehill 3-2 in a cracker of a match.
Daragh Fitzgerald put Nanaimo ahead from the spot in the 28th minute and that was a lead they held until the 55th minute when Craig Gorman tied things up for the leader. Wesley Barrett then put Lakehill ahead for the first time on the night eight minutes later, but any thoughts about them making it 13 straight wins were undone with some late, late drama.

Taylor Arbour brought Nanaimo back onto level terms in the 82md minute and the dagger came from Colin Jacques in the last minute to secure a famous victory.

Another surprising result on Friday saw Gorge and Victoria Highlanders battle to a 1-1 draw at Hampton Park. Matthew Plaath put the Highlanders ahead from the spot in the 25th minute but Matteo Ruffolo hit the equaliser for the home side four minutes into the second half.

Saturday saw an interesting game in Powell River as Vic West came into town and defeated Villa 1-0. And it was to be another last gasp winner, and another penalty, as Marcus Campanile fired home from the spot. Earning his second shutout of the year was Vic West Keeper Max Gill.

The weekend wrapped up with Bays beating up on Westcastle with a 6-1 scoreline. Goals from Patrick Nelson, Kiyoshi Croke, and Mark Ashlee saw Bays three up by the 13th minute mark and that was how things stayed until the 43rd minute when Sergio Duran added a fourth. Nelson hit his second of the evening two minutes into the second half and Ethan Finnegan rounded off the scoring for Bays in the 76th minute. There was still time for Westcastle to hit a late consolation goal and that came from Brian Said with seven minutes remaining.

So after all of that action, here are the Division 1 standings going into the last game before Christmas: 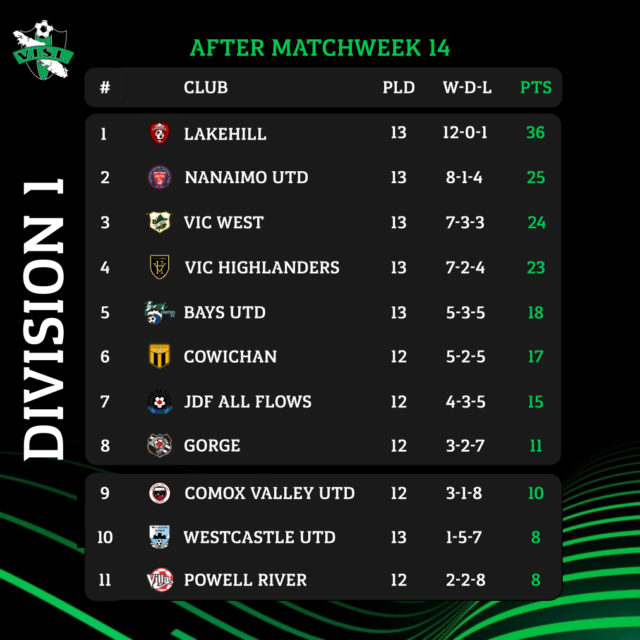 Lakehill are still at the top, but their undefeated season has come to an end. A tough thing to accomplish, and only done three times in the VISL modern era, with Bays United being the last team to do so.

A Highlanders draw and the Vic West squeaker means that the Greens now hold down third place, a point behind Nanaimo. The Bays win, coupled with the Cowichan loss allows the squad from the Oak Bay municipality to slide into 5th.

JDF and Gorge picked up much needed results, giving them some space from the relegation zone.

It will be a crazy 2022 as we see if Comox, Powell River, or Westcastle can work their way out of the basement.

The goalscoring leaderboard got really congested again, and here is how the race to determine the Golden Boot winner looks, with Blair Sturrock and Patrick Nelson leading the way: 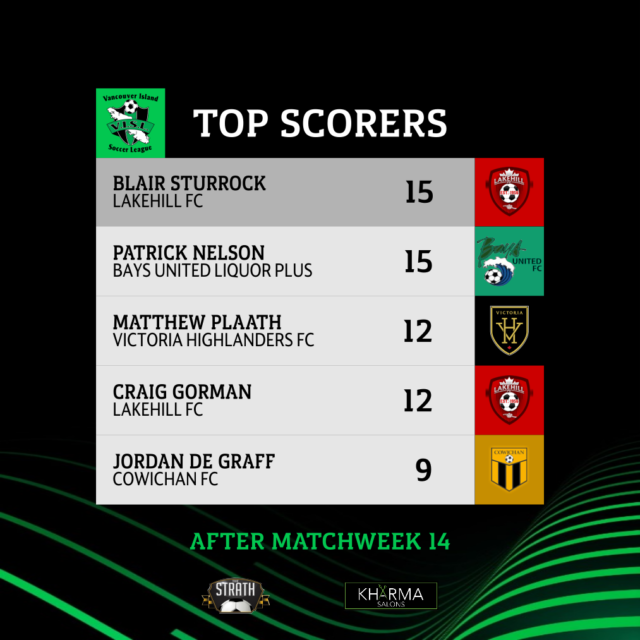 The Golden Gloves leaderboard also got a little closer after the weekend, with Cody Carter and Max Gill getting results again, and moving their way up, looking to catch Lakehill’s Hardeep Gahunia.

Friday starts out with a BANG!

Finlayson will see its last use for a Divison 1 game in 2021, and it will see a battle of the Greens as Vic West hosts Bays Utd. Both sides have had very hot and cold periods so far this year, Friday will be do or die time for Vic West, at least for the Division championship. They must get a three point result in order to keep any chance of catching the division leaders. Bays will want a result of their own, looking to get into the top four.

Friday also sees Westcastle hosting Cowichan at Starlight Stadium. Westcastle have had a terrible year for results, and have deserved better. They will give Cowichan a match and would love to scrape out of the bottom three region.
Cowichan has had a tough go as of late, and will look to wrap up 2021 in a positive manner.

The last game on Friday night is a massive one. Gorge host Juan de Fuca at Hampton Park. Each team will want the full points in order to separate from the bottom teams in the division. Both teams have had Jekyll & Hyde type seasons and it will be interesting to see which teams show up on Friday.

The Saturday game between Victoria Highlanders and Nanaimo has been rescheduled for February 2022.

Wrapping up things, division leading Lakehill are hosting Powell River at Braefoot Park. Everything about this game has blowout written all over it, but stranger things have happened. Powell River is young and will come out and work hard, but they will need a David type performance to take down Goliath.

Comox has the weekend off to start up their Memorial Tournament for past player and community member Tom Butcher.

Here’s how the full slate of matches look: 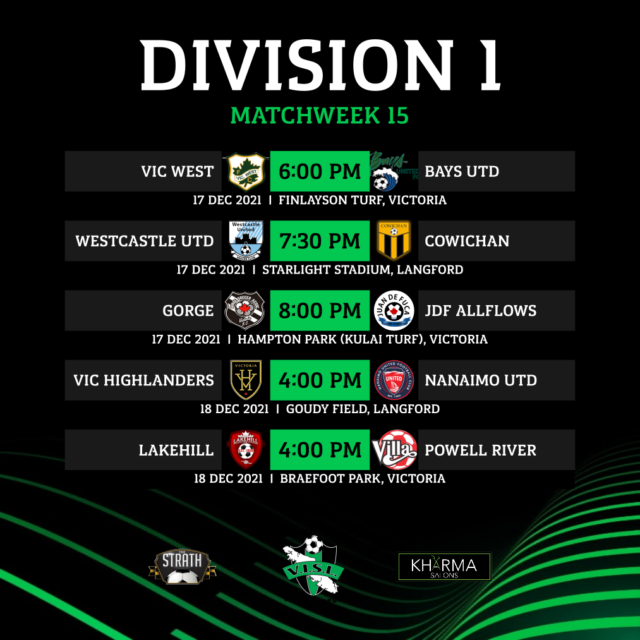 Some huge battles to be had. While the top four teams and their placements do not have the opportunity to change too much, there is plenty of other things on the line. Will the VISL’s oldest club finish up 2021 in 2nd place? Will Westcastle or Powell River get out of the basement? Who will be in 5th place come Sunday night as three different teams are fighting to get there?

It will be a good weekend of soccer, and it will make some players have a much more enjoyable holiday session.

See you at the pitch one more time, then it will be time to countdown to another Santa visit as he announces the Allstar teams next week.