(We didn’t have a chance to do our own review this week, so here’s one courtesy of the VMSL themselves)

There was plenty of movement in the middle of the table this week in the Premier Division, although the top and bottom remained status quo. With a third of the schedule still to play, it is shaping up to be a great race to the finish up and down the division!

For the second time this season leaders BB5 were unable to complete their match. There was a little over a quarter of an hour left between them and Coastal when the lights snapped off at Newton. Eric de Graaf had been putting in a Man of the Match performance for BB5 when things were cut short. He had scored early to give BB5 the lead, smashing home a corner kick delivered by Yassin Essa. He had also pulled a goal off the line at his own end after BB5 keeper Andre Metcalfe was beaten. Metcalfe was otherwise solid on the night, making a number of solid stops, however he was beaten by Sean Northcote just before halftime and this is where the scoring stood when proceedings were brought to a premature halt.

BB5 perhaps felt that they could have been more in control of this match, with leading scorer Nic Morello having twice been robbed by the Coastal keeper in the first half and Ramsey Alfantzi denied by a great save as well. In the second half Connor Glennon spurred a great chance to take the lead for the home side just a few minutes before the lights went out, but he failed to hit the target. This leaves it as anybody’s game for when the remaining 16 minutes get played.

Despite the Coastal against BB5 match not getting completed, Coquitlam Metro Ford failed to gain any points on their rivals at the top end of the standings, as they were well beaten 3-0 by VUFC Hibernian.

Farzad Rajab Ali scored pretty much straight from the kickoff to give VUFC the lead and they never looked back. The match stayed that way until just past the hour mark when Jack Napier-Ganley potted one to double the advantage, followed almost instantly by Rajab Ali notching his second goal of the match. Bennet McKay earned the clean sheet in the win for VUFC and Metro Ford will be happy just to see the back of Hibs for the rest of the season. For whatever reason, the VUFC boys seem to have Coquitlam’s number, having beaten them by the exact same score out at UBC back at the end of September.

Elsewhere Friday night, Rovers Hurricanes continued their resurgence, knocking off local rivals Pegasus 3-2. Golden Boot leader Nick Soolsma moved onto 17 goals from 14 matches, as he scored all three of the Hurricanes goals in the win. Gurmaan Jhaj initially pulled Peg level five minutes after they fell behind, but Pegasus simply did not have an answer for Soolsma and their Newton brethren. Kerman Pannu would make things interesting with a goal near the death, but it was too little too late on this night.

The win moved Hurricanes, perhaps improbably after the way they began the season, closer to the top six and a potential Provincial Cup spot after White Eagles beat Inter 2-0 at Burnaby Lake. There was not much in the match until a pair of lightening quick Matlash Vladyslav strikes illuminated events with 10 minutes to play. Man Ho held on for the shutout as Inter stalled out, dropping to seventh, with White Eagles putting some much needed breathing room between themselves and the relegation places.

Taking over for Inter in sixth were West Van who shook off back-to-back heavy defeats to lay a 5-2 thrashing of their own on Croatia. Collin Phillips got the Amblesiders off to a much needed solid start at Burnaby Lake, putting West Van ahead just before the ten minute mark. It looked as though this would be how the teams went into the break, until a penalty was awarded to West Van right on the cusp of halftime. Eoin McCormack stepped to the spot and made no mistake, doubling the visitor’s lead at the perfect time.

West Van carried that momentum out of the break, with Aidan Izadi notching his fifth goal of the campaign to put them up by three. Croatia finally sparked to life on the hour mark when Cole Johnson scored to offer them a lifeline and a way back into the match. It only lasted five minutes, though, as McCormack struck with his second of the afternoon to quash the Croatia comeback before it could get started in earnest. Tomislav Tomic did score for the home side with just over ten minutes to play, but Izadi his second, and West Van’s fifth, to round out the scoring. It was all too much for Tomic who lashed out in the final minutes and was sent off for violent conduct, ruling him out of Croatia’s next match.

The weekend wrapped up with a massive relegation six-pointer Sunday night at Burnaby Lake between hosts MAFC and visitors Norvan, and the VMSL cameras were there to see it all.

It was clear which team came into the match with the belief that they could take all three points, as Norvan were on the front foot from the off. Gordon Grice and Tony Paiero both saw early chances go begging before Jurgen Weinczok was prevented from opening the scoring by a desperate lunging MAFC tackle. Beckham Hatch then had a pair of chances that he put wide and Devin Delaney carved out a great opening off a corner kick, but he too failed to hit the target with his effort. MAFC struggled to string offensive moves together and were mostly limited to speculative efforts in the first half, although they did work a lovely throw in routine that they were perhaps unlucky not to take the lead from part way through the half.

Norvan’s pressure finally delivered them the opening goal just before halftime. Adam Swanson brought down the MAFC clearance and deferred to Grice who carved out some space in the midfield and passed to Andre Herath. Herath, who was a menace for Norvan on the night, bossing the midfield, drove into the MAFC area before sliding the ball over to Wienczok who smashed it low into the far corner to finish off a lovely team goal.

Norvan continued to carry the play through the early part of the second half, with Hatch, Wienczok, and Grice all forcing the keeper into saves. Naturally, though, Norvan’s inability to kill the game off with a second goal eventually emboldened MAFC, who began to mount the pressure over the final quarter of an hour. Fortunately for the visitors, goalkeeper Ethan Duggan and his backline were up to the task of holding MAFC at bay. Norvan continued to create chances of their own, but there would be no further scoring in this one. That said, Norvan likely could not care less as they took three valuable points back to the North Shore!

You can see Sport Revolution’s highlights from the match below and on their YouTube channel: 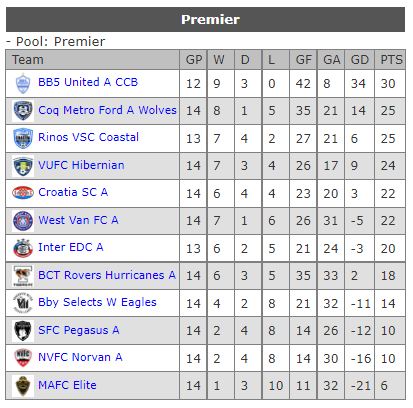 And here’s what on the slate over this weekend in the VMSL Premier, the final action of 2021.