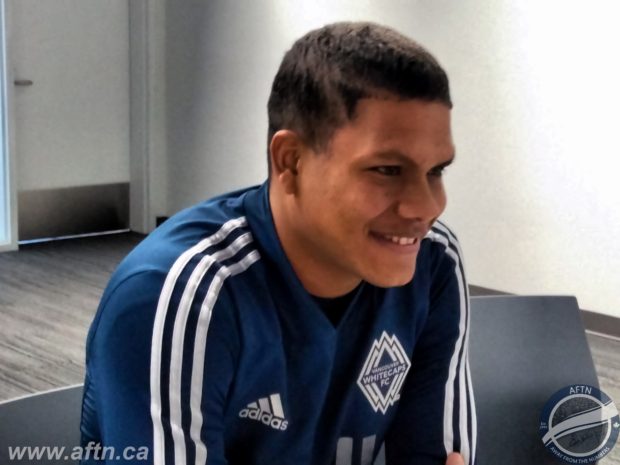 Anthony Blondell couldn’t be heading into Vancouver on more of a high.

2017 was a dream year for the 23-year-old Venezuelan striker, but as he gets set to begin his new adventure in Major League Soccer with the Whitecaps, he’s hoping the best is yet to come.

Blondell’s league leading 24 goals helped Monagas SC become Venezuelan Primera Division champions for the first time in their 30-year history, with his play also earning him his first senior cap for his country.

It also secured him a move to MLS with the Whitecaps.

The ‘Caps signed Blondell at the end of November, but the striker still had a job to do with Monagas in the Primera Division Serie Final against Deportivo Lara, and he duly obliged, leaving his old team in some style by scoring the first of two goals for Monagas in their 2-0 second leg win on December 17th to give them a 2-1 aggregate victory.

It was the storybook end to a dream season, but now Blondell is looking to continue his success here in Vancouver.

“After I won the championship I felt that I needed a new challenge,” Blondell told AFTN through a translator at Whitecaps training this week. “I was very sad because I am very grateful with Monagas. With the club, with the coaches, with teammates, directors, President. But I’m here to show my football and I hope that I can do the same with the Vancouver Whitecaps.”

Blondell is ambitious. Like all young players he wants to play at the highest level that he can and wants to push himself to be the best player he can be. To do that he knew he had to move out of what he knew and the comfort zone that playing in your own country brings.

With Venezuelan football coming to the world’s attention after the excellent performance of the U20 side in reaching last year’s World Cup final, players like Blondell started to come onto scouting radars. As clubs started to take an interest in the young striker, he saw a growing league like MLS as the ideal platform for the next stage of his development.

Blondell joins the growing ranks of his countrymen in MLS. Last year saw six Venezuelan born players in the league. Atlanta’s Josef Martinez led the way with his staggering 19 goals in his 21 appearances. NYCFC’s Man City loanee Yangel Herrera and RSL’s Jefferson Savarino were two of the other high profile players, with players also at Dallas and Minnesota United. 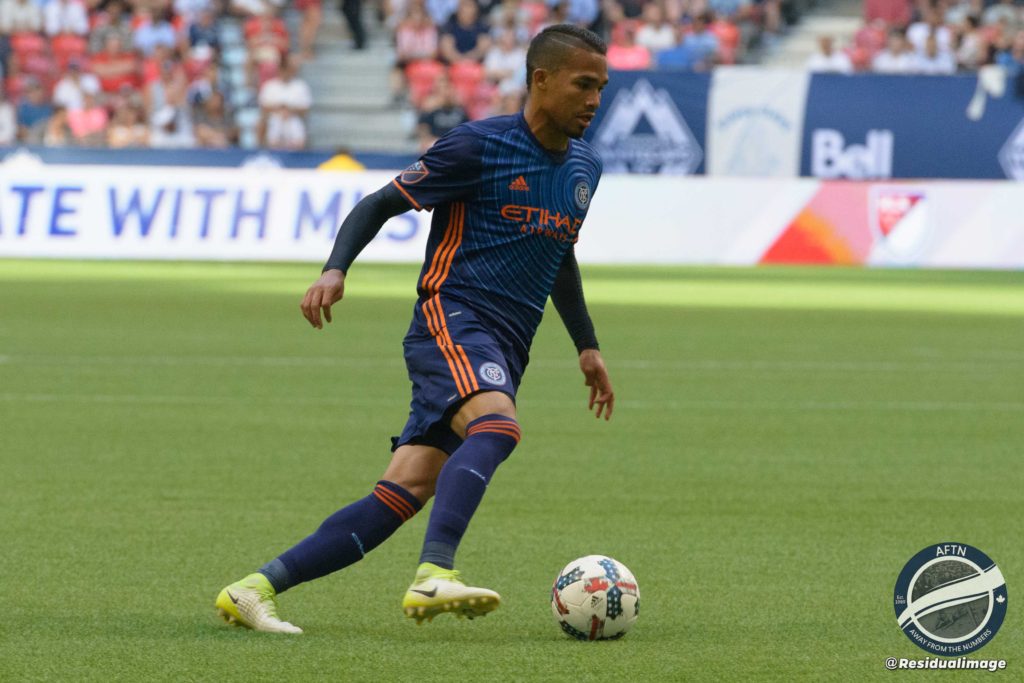 It’s created a growing interest in MLS in the country, and with many games shown on television there, Blondell is certainly familiar with the environment he’s coming in to.

“Yes, I have seen some games,” Blondell told us. “The games are shown in Venezuela. The ones that Venezuelans play. Now I’m really excited because I have a bunch of former teammates that are playing here in Major League Soccer that we will be playing against.”

That should mean that Whitecaps games will now have a whole new audience in South America, but Blondell won’t be the only new Venezuelan in the league this season. Defender Rolf Feltscher has joined LA Galaxy, fellow defender Alejandro Fuenmayor has signed for Houston, midfielder Júnior Moreno is heading to D.C. United, and left back José Hernández is joining his countryman Martinez in Atlanta. On the coaching side Portland have replaced Caleb Porter with Giovanni Savarese.

Venezuela’s last 20-man squad, for the friendly against Iran on November 13th, consisted of players who are now plying their trade in 15 different countries, including Blondell, who earned his first senior cap.

It’s testament to the growth of the game in the country and it really feels like an exciting time in Venezuelan football. The epitome of this came in Korea last summer, when Venezuela’s U20 side reached the World Cup final, losing a heartbreaker 1-0 to England.

To get there they topped their group with maximum points ahead of Mexico and Germany, before beating Japan, the U.S., and Uruguay in the knockout stages. For a country most well known for being the only CONMEBOL team to have never qualified for a senior World Cup finals, it was an incredible achievement and the underdogs found new fans worldwide.

But the senior team finished bottom of qualification for this year’s World Cup in Russia, 15 points adrift of fourth placed Colombia and with just two wins during the campaign. No-one wants to put any undue pressure on national team head coach Rafael Dudamel, but hopes are high in a country where baseball is king, that this could be the real turning point for the team and the game.

It may yet take a few more qualification campaigns in one of the toughest regions in world football, but the signs are there they should at least be more competitive and the success of the U20 side brought a lot of pride in the country and amongst the senior players.

“It was a great honour for me to see my flag in the final of the World Cup under-20,” Blondell said. “For a while we’ve been having great players. Many of my compatriots are going to be playing abroad in many other countries. We do have a great team in the national team and I hope that we can qualify for the next World Cup.”

That goal is four years away. For now, Blondell’s focus is firmly on the Whitecaps, making his mark on the league and his new team, and continuing where he left off with Monagas.

Blondell arrived in Vancouver with his agent a week and a half ago, a few days before preseason got underway. It gave him the chance to have a bit of time to himself to get a feel of his new home. A chance to both explore the city and the training facilities.

And from what he’s seen so far, he’s been very impressed, particularly with the Whitecaps training centre up at UBC, and what it will mean for his continued development.

“It’s amazing,” Blondell said. “The facilities are just incredible. I know that I can get much, much better with this training and these facilities.” 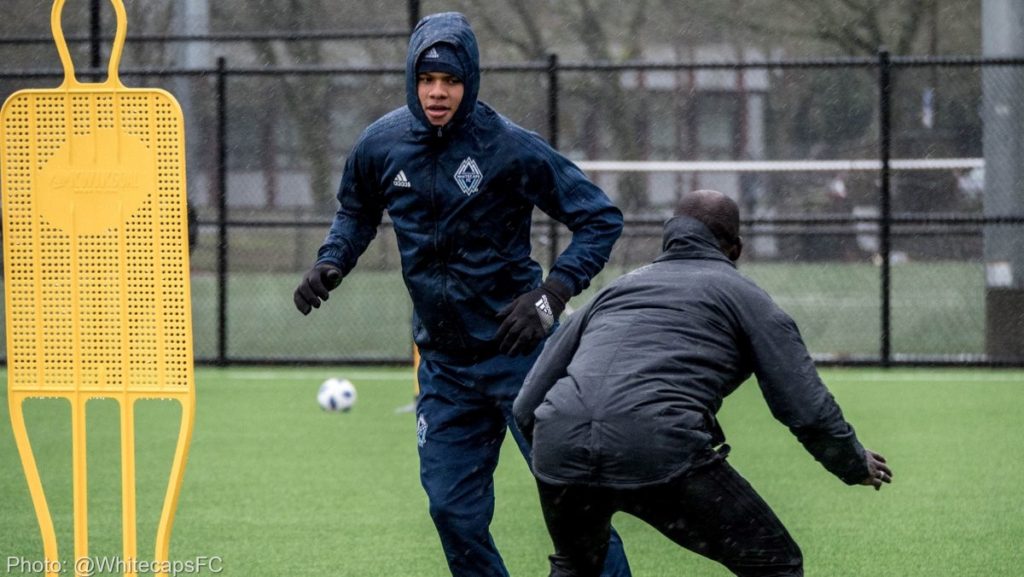 You never know how it’s going to go with players. Some will settle in quickly, but for some it’s all a bit overwhelming. A bit of a culture shock. Some simply don’t settle at all.

Family-wise, Blondell has travelled to Vancouver on his own. He’s not married and the rest of his family are back in Venezuelan. His agent has come here with him to help him settle in initially, and once preseason is over the plan is for his mother and father to fly up for some visits.

Blondell has the advantage of there being so many Spanish speakers within the Whitecaps squad. That will naturally help him settle in on the footballing side, but it’s off the pitch that is usually the key. His teammates will rally round and the Whitecaps have a good support mechanism in place, but right now Blondell doesn’t speak English.

He started taking lessons before he flew out from Venezuela and these will continue apace here in Vancouver, and the striker pegs that with high importance.

“Of course I really need to learn English,” Blondell said. “I know that many of my teammates can speak Spanish and are Spanish speakers, but I really need to speak English as soon as possible.”

His initial reaction at this week’s training sessions was one of surprise at how competitive and tough tackling it is, but as he did laps around the pitch on Saturday morning in freezing conditions and pouring rain, I asked him through a translator what he thought of the weather. He smiled, said it wasn’t too bad, and added “this is what it is now”. He’ll settle in just fine.

In many ways, Blondell feels every way a typical Whitecaps signing. He’s a young South American player, basically unknown here but with what looks to be a lot of potential. A high ceiling that hasn’t nearly been reached. He’s coming in some form after a standout season and is hungry to improve, win, and put himself in the shop window for a possible bigger move down the line.

Some will draw comparisons with another South American forward that headed north, Octavio Rivero. And there are a lot of similarities. But Blondell also feels a different kind of player to Rivero. When the Uruguayan headed to Canada, he did so on the back of a string of performances at his previous clubs where he started off strong, then produced very little.

The same thing happened here in Vancouver. After a blistering run of five goals in his first six appearances, he fizzled out, adding just seven more in his next 42 games, before heading to play with Colo-Colo in Chile after just 16 months in MLS.

The pressure was on Rivero from the start. Coming in as a Designated Player will always do that. This isn’t the case with Blondell. He’s definitely been brought in to make an impact, and the chance to pair an exciting young attacker with a veteran like Kei Kamara excites ‘Caps coach Carl Robinson, but he’s not going to rush Blondell and wants the Venezuelan to find his feed naturally in Vancouver and MLS.

“I’ll probably ease him [in] gently,” Robinson told us this week. “He’s got great potential. He’s not the finished article, which is why we’ve probably got him, because if he was the finished article we probably wouldn’t be able to get him. Bringing Kei in has been a big factor as well. I thought the balance of having an elder statesman, as a well a younger potential guy, was right.

“There won’t be much expected of him in the early stages. But having said that, if he wants to start the first game of the season because he’s banging in goals, he certainly will.”

It’s hard not to see Blondell as a starter by midseason at the latest, but that depends on both his form and that of others.

The Whitecaps look likely to line-up in a 3-4-2-1 or 3-4-1-2 formation in the early part of the season. With Kei Kamara up top, and Yordy Reyna in behind the big striker, the position beside or just behind Kamara is up for grabs. Right now I would be surprised to see Cristian Techera and Blondell share some starts there.

Techera has looked very impressive in this first week of preseason, sending in some pinpoint crosses that Kamara has been burying. If he continues that form, there’s certainly less pressure on Blondell to be the starter come March, but you already know that competition for starting places will be fierce this season, and it’s a battle the Venezuelan is looking forward to.

“As any other player, I would like to be in the 11,” Blondell admits. “I will work as hard as possible from the first day. Then I’m just waiting for the coach to see what’s in there for me.”