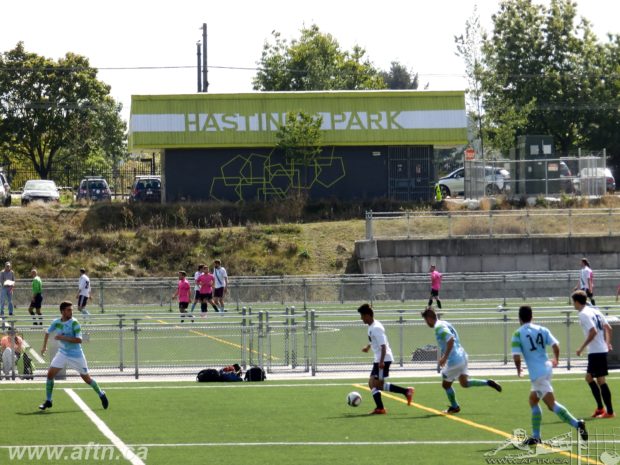 The new Vancouver Metro Soccer League season kicked off last weekend, and if the opening games are a good guide, it’s going to be another entertaining and highly competitive year.

If you’ve enjoyed AFTN’s Provincial Cup coverage over the past five years then you’ll be pleased to hear that we’re going to be adding some (semi) regular VMSL coverage to these pages from this season.

Our Whitecaps and college soccer coverage probably means that we’re not going to be able to get out every week to matches, but we’ll try and bring you at least a monthly round-up of the key talking points from the Premier Division, as well as news from Divisions 1, 2 and 3. If any readers would like to help us bring more regular coverage or be one of our VMSL correspondents, then get in touch, we’d love to hear from you.

This season’s VMSL Premier Division kicked off with a feast of football at Coquitlam Town Centre on Saturday afternoon with all 12 teams playing their opening matches over six hours.

It was a good chance for everyone to get a look at everyone else, with some strong results and standout individual performances over the afternoon.

Last season’s title was a closely fought affair between eventual champions Coquitlam Metro-Ford Wolves and Pegasus FC. One point separated the two sides, and although Pegasus got their revenge by lifting the Provincial Cup in May, they’ll be looking to add a league title to their trophy cabinet this season.

Both teams got their 2016/17 campaigns off to a winning start.

Metro-Ford ran out 3-1 winners over ICSF Columbus thanks to goals from Carlo Basso, Vito Iacobellis, and Devin Phelan. Daniel Johnson scored for Columbus.

Pegasus were made to work hard for a 3-2 win against EDC Burnaby. Jacob Lensky gave the Horsemen an early lead before goals from Joe Agiba and Amara Toure gave the Burnaby side a 2-1 advantage. But a brace from Chetan Jhooty gave Pegasus all three points.

Taj Sangara also hit a brace for Pacific United in their 2-1 win over Croatia SC, with Mark Malamura scoring Croatia’s goal. Last season’s Division 1 champs Westside FC also went down to a 2-1 defeat upon their return to the Premier Division, losing out to North Delta SC.

The only draw of the afternoon came in the first match of the day, with ten-man Richmond Hibernian battling it out to claim a point in a 2-2 draw with West Van FC. Whitecaps Residency alumni Declan Rodriguez scored for the Hibs, as did cam Stokes, with Cathal O’Connor and Colin Phillips finding the net for West Van.

The performance of the day fell to Rovers Tigers United’s Nick Soolsma. The former TFC man hit four goals as his side demolished Club Inter to jump to the top of the Premier Division standings after the first week.

Our good friends at BC Soccer Web were there to capture all the action in Coquitlam, so head over to their site and check out all their photos from an action packed afternoon.

We headed up to Empire Field on Saturday for an afternoon of double dipping and watching people being tossed around on rollercoasters (also if you listen carefully you can hear the ghosts of Whitecaps past). 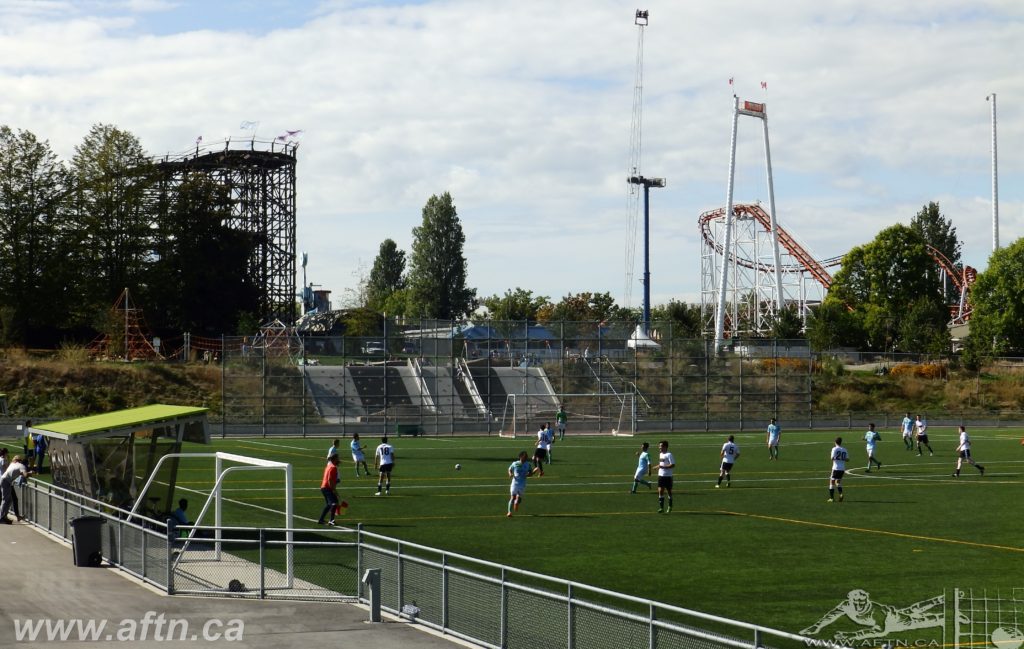 We were there to see the match of the weekend in Division 1, a rematch of this year’s Provincial B Cup final between Campo Atletico and Rino’s Fury. Campo ran out winners in May, but the Fury continued their excellent league form from last season, coming from behind for a 3-2 victory.

It was an enjoyable match and Rino’s took the lead early with a free kick from Dylan Dailly on his debut with the Fury. Santiago Sanchez pulled Campo back level soon after and that was how it stood at half time.

The second half was end to end, with both teams having a number of chances but Edson Castro put Campo ahead with a nice outside of the foot finish to bury a perfect cutback. But Rino’s fought back hard and secured the win with two quick goals, the first from another free kick, this time from Tomas Klembara, before Brooks Van Stavel fired home the winner.

You can see our shaky (and windy apparently!) video of both Fury free kick’s and Campo’s second goal below:

Rino’s have three teams in Division 1 this season following the Fury’s promotion as Division 2B champs and Tigers relegation from the Premier, and all three sides made unbeaten starts over the weekend.

Rino’s Tigers got the ball rolling on Friday night winning 4-1 at last season’s Division 2A Champions GN Sporting Club. That win sees them top the table on goal difference after the first week’s results. Rino’s Vanc SC were involved in a 4-4 cracker at home to South Delta Royals on Saturday, with the Royals’ James Millar banging in a hat-trick to lead the Division 1 scoring charts after week one.

Across the pitch from the Campo-Fury game, on the other Empire Field, was the Division 2A match between 13th Legion FC and Vancouver Strikers, with the Strikers running out 2-1 winners thanks to a controversial late goal and a brace from Stuart Allester.

We only had half an eye on this one, but the Strikers had taken the lead before Niko Kerasiotis pulled the Legion back level midway through the second half. It looked to be heading for a draw before Strikers scored the winner late on off an indirect free kick. The free kick was awarded when the Legion keeper, who had been asking a passer by for the time, turned around and collected the ball on a back pass. 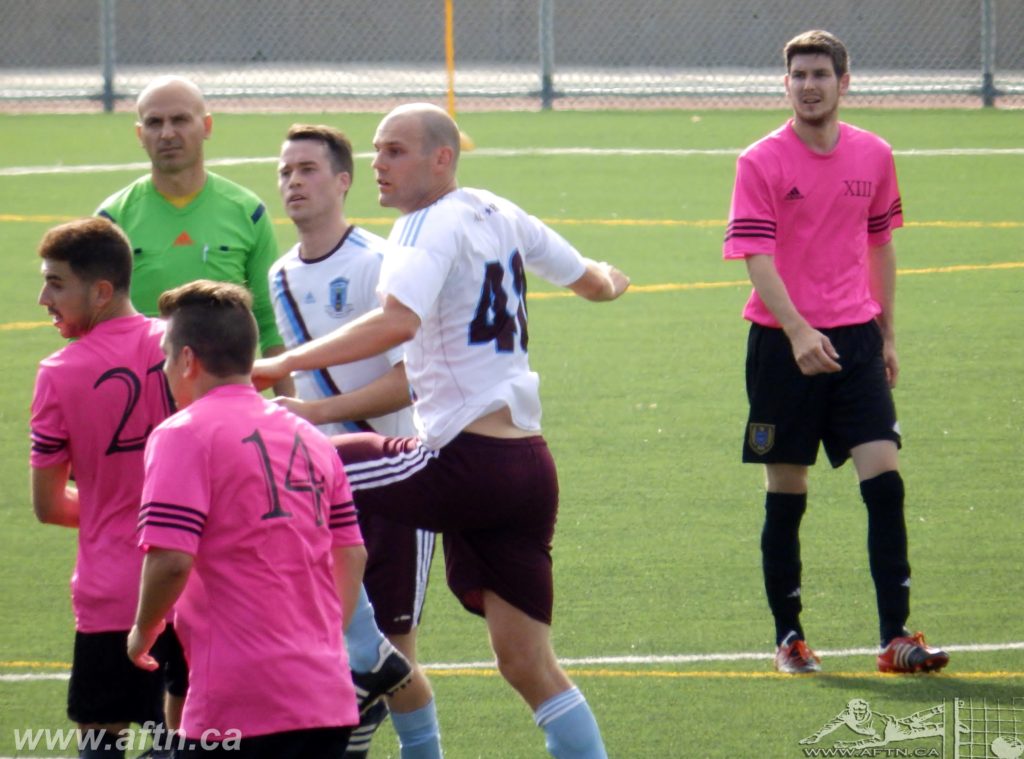 You can see some more of our photos from the Legion-Strikers game HERE.

Elsewhere in Division 2, Burnaby Metro Athletic lead the way after week one following their 7-0 thrashing of PCOV Europa in Pool A, while FC Serbia United lead Pool B after beating Vancouver United FC Rangers 5-0, with former WFC2 and SFU player Jovan Blagojevic getting on the scoresheet. A tough one for the Umbrella Ultras to take in there.

The Division 2 match of the weekend seemed to come at Empire on Sunday, with Bombastic FC winning a wild one 6-5 against Meraloma FC. That sounds like some Whitecaps defending in that one.

In the Third Division, West Coast Saints lead 3A after a 6-2 win over France FC. Cliff Senior Cobra lead 3B after a 9-0 hammering of GFC United A Lions, with Chris Corrigan’s Bowen Island FC second after their 4-0 win over Cosmos FC. Coquitlam Metro-Ford Lupi lead Division 3C after their 7-0 goalfest against South Delta Rangers.

So that’s our wrap up of the first week of VMSL action. You can find out this week’s schedule (and all the current standings) on the new and improved VMSLsoccer.com website.