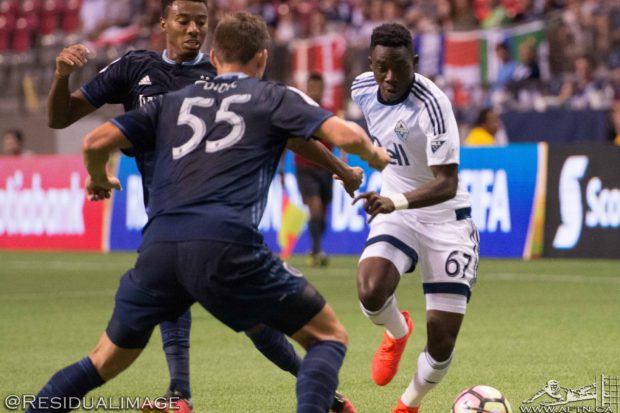 I’m starting to think we need to leave the roof open at BC Place, no matter the weather, and pray to the rain gods while Garbage’s “I’m Only Happy When It Rains” blasts out of the PA system.

Forget KC and the Sunshine Band, it was Carl Robinson’s rainstorm band that did the business at Children’s Mercy Park on Tuesday night, surviving a two hour rain delay to see off Sporting Kansas City 2-1 and clinch their place in the CONCACAF Champions League quarter-finals for the first time in the club’s history.

All the action came after the rain delay with Erik Hurtado making it two goals in two games when he fired Vancouver into a 41st minute lead. Diego Rubio tied things up ten minutes into the second half, and that’s how it looked like it would end before Alphonso Davies scored his first ever first team goal three minutes into stoppage time.

A historic goal on a historic night for the Whitecaps.

“Can we play you every week?” is a supporters chant usually aimed at opposition teams that they have beaten fairly easily, and often regularly. When it comes to Vancouver Whitecaps this season, it’s a chant that could be appropriated to starting line-ups.

Carl Robinson once again rang the changes from the team that beat Columbus Crew in MLS action on Saturday, ten in total, with Kendall Waston the only player to start and see 90 minutes in both games.

All the chopping and changing didn’t work for the ‘Caps last year, but this time around it’s worked to perfection, as the makeshift team made it three wins from their three Champions League group games so far, putting in another excellent performance and leaving us wondering why we don’t just put this team on the park every week in the league?

Vancouver headed in to the game knowing that a win would secure their place in the Champions League quarter-finals with a group game to spare. A draw would have eliminated KC, but would also all but guarantee the ‘Caps a spot, so it wasn’t surprising that the home side had the better of the early running, put the Vancouver defence to the test in the opening exchanges.

Connor Hallisey sent a dipping volley onto the roof of Spencer Richey’s net, before Rubio fired a low curler just past the right post a minute later.

Neither team created too much danger after that before the heavens opened in the 35th minute and both teams were taken off for around two hours.

When they returned, it was Vancouver who looked the brighter and Hurtado fired the ‘Caps into the lead four minutes before half time, in a well worked moved that saw a neat give and go between Davies and Nicolas Mezquida before the 15-year-old (trademarked) sent in a delicious low cross that Hurtado buried from eight yards out.

The Whitecaps were 45 minutes or so away from history but KC came out the stronger in the second half, with Rubio firing a free kick into the side netting three minutes in.

It was no surprise when the Chilean finally got his side on the scoresheet seven minutes later, shooting in off the post, after some nice footwork in the box saw him get past two ‘Caps players like they weren’t there.

Vancouver responded and Fraser Aird saw his effort saved by Tim Melia at his near post in the 58th minute before Richey pulled off the save of the night to turn a dipping 30-yard Paulo Nagamura effort around for a corner, which Kris Tyrpak hit inches wide.

Hurtado had a great chance to give the ‘Caps the lead once again in the 64th minute when he bore down on goal but shot wide instead of squaring for an open Mezquida, who would have had basically a tap in.

Davies was the next to come close for the Whitecaps, but Melia got down to turn his effort around the post.

With one Chilean DP getting it done at the one end, Vancouver’s had the chance to do it at the other and likely seal the win, but he pulled his shot with the goal seemingly at his mercy ten minutes from time.

KC pushed for the winner that would keep their Champions League hopes alive but Richey did well to keep out a Hallisey ball that headed towards the bottom corner in the last minute of normal time.

With the seconds ticking down, it was to be Vancouver who struck the late winner, as substitute Kyle Greig played in Davies, who showed great composure to fire home from the edge of he box, with the aid of an ass deflection. But they all count!

A fantastic 2-1 win for Vancouver, who will now be going all out to make it 12 points out of 12 in the hope of getting a top four seeding in the quarter-finals and hopefully missing out on some of the strongest teams. Goal difference could be crucial (Mexican side Pachuca hit 11 on Tuesday night!), so don’t expect any let up in that one.

Vancouver will now start their 2017 season early, with quarter-final action usually kicking off in late February. That should also mean an earlier start to preseason, and missing out on their traditional week long stay at the Portland tournament. Can we dream of a preseason in the UK instead? Probably not, but we can dream!

It all doesn’t make up for the poor displays in MLS of late, but with two win in their last two matches, Vancouver at least have some confidence back. They need to keep it going, get on that roll, and try and finish the regular season with eight straight wins.

Tough ask but it’s been a strange season all round so far, so who knows what’s possible.

“He’s a young talent, he’s one of many young talents we have in our program. I’ve included him in the squad this year over the last few months because he deserves a chance. We as a club, when we think you’re ready to make that step up, we’ll give you that chance. He showed today a lot of good things, but he also did a lot of things that he was a little naive in his decision making. But you get senior players that make wrong decisions at times, so he should be very proud of his performance, as should every one of them in that locker room. We created a bit of history for the football club today, managing to qualify for the quarterfinals of the Champions League, so we’re delighted.”

“It’s very nice. We didn’t come here to try and get a tie, we came here to try and win the game. You see us at the end of the game, Peter [Vermes] and his team are trying to win the game and we are trying to win the game as well by pushing numbers forward and trying to catch them on the counter attack. But we’ve got a lot of work to do in MLS playoffs. We know that. We’re below this red line that everyone keeps talking about and we are underdogs. We have a massive game on Saturday. Our season is on Saturday against our rival Seattle. A very good team as well, but our focus firmly switches now to MLS playoffs.”

“I gave them a little poke after 34 minutes when the delay happened because I thought we did okay. But okay’s not good enough at this level. I thought we were a yard off, I thought KC were the better team for the first 20ish minutes. When one person is off, his timing in relation to closing down, it’s a knock-on effect and I think we did that. So I gave them a little poke. A calm poke, but I let them know what I thought and 10 minutes after the rain delay the response was absolutely spot-on. I feel for the players sometimes because you put themselves in their position. It’s horrible as a professional athlete to get yourself up to play 30 minutes and then have to wait an hour in the changing room to play another 10 minutes. Same for both teams, but again, it’s not ideal.”

On the moral boost with the win…

“You focus one game at a time and we lost two weeks ago at home to the New York Red Bulls a little bit unfairly. Like I said at the time, the performance was spot on, they couldn’t fault us and Eric had missed a number of chances in that game and credit to him in the last two games he’s managed to score two goals. You’ve got to show character in this league. The teams that have character are left at the end of the season. We’ve got character guys in there, yet we’re young and yet we make mistakes sometimes. Hopefully that result building on Saturday’s result will stand us in good because we need to get on a roll now.”

Thoughts on the match…

“I think there were certain moments that were good in the game. I also think at the end, giving up a goal at the end like we did, it shows a lack of concentration which has to do with a lack of fatigue. I think there were a lot of guys out there that just weren’t 90 minutes fit to play at the pace we want to play at. There is no doubt that fitness had a lot to do with it. Some guys had really good performances. I thought [Tyler] Pasher was really good at let back. I thought when [Kris] Tyrpak came on, he gave us a little bit of an injection. He created a couple nice chances and maybe we could have finished one of them off. I thought [Diego] Rubio worked hard. It was not only a good goal, but he was good on the ball and he did some good things from us. From that perspective, those things were good.”

“I think he has the ability to come in and help us in MLS games, for sure. There is a reason we signed him on a full-time basis. We feel that the has the potential to be a real contributor as time goes forward.”

On how the team performed coming out of the delay…

“It was a soft goal. Were we soft? Yes. Was it a soft goal? Yes. One guy dribbled through three of our guys at the end. There is no way that should happen. He gets a great cross across and the guy beats us to the ball. It’s a snowball effect, it’s just one breakdown after another.”

“He’s got some good tools. He’s got some tools for the game including his speed and he is confident on the ball. He can be effective at times and dangerous, but at the same time, I think always for coaches, you are very conservative with how you look at players.”

Thoughts on the match…

Thoughts on the goal…

“I always say that if my goal helped to win, I am really happy. I am not happy because I’m a winner and I want to win every time. I am disappointed tonight.”