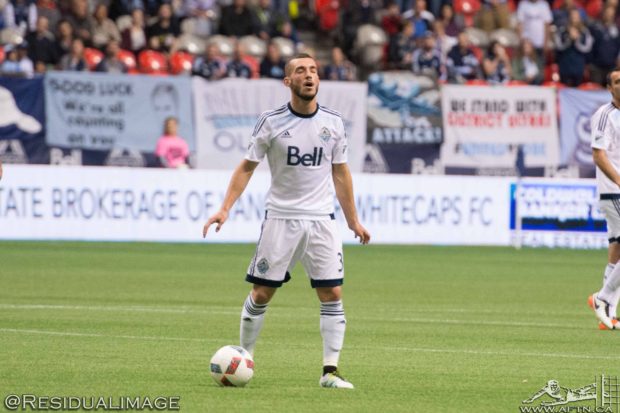 Vancouver Whitecaps modus operandi under Carl Robinson has been very clear. The ‘Caps coach wants to build a young squad, with an eye to the long term future of the club, sprinkled in with relatively cheap South American talent and the odd veteran.

It’s worked to an extent, and we certainly shouldn’t be looking to blow up that ethos any time soon, especially with a new young crop of homegrown talent in the USL and Residency sides, but it’s a philosophy that needs some review and this summer’s transfer window is the ideal time to do it.

We’ve seen the start of it on Monday with the addition of a pair of 29-year-old Canadian defenders David Edgar and Marcel de Jong. Two players with experience overseas and at international level, hopefully bringing some calm heads to a defence that has been all at sea itself at times this year.

This is still a young Whitecaps squad. The youngest in the league we’re regularly told (which I haven’t actually checked lately, but is likely still true!). With that will always come ups and downs in their performances. It’s just natural. We’ll see highs, like last season, and lows, like this season. Then games we really want to forget like that first leg in Ottawa or many of last year’s Champions League performances.

Yet while the ‘Caps have struggled at times this year, most of their downfalls have come from individual errors, and the vast majority of those have come from the more experienced guys in the team. The same is true with the explosion of suspensions.

So experience doesn’t necessarily mean a turnaround in fortunes, just as playing a young side doesn’t automatically mean they’re in for a struggle. But that said, it’s been a disappointing first half of the season from a number of our younger players, all of whom have another year under their belt in terms of experience and development. That’s concerning.

As we already mentioned during Residency Week, with all the time, money and effort invested into the Whitecaps excellent Residency program, it’s very disappointing that six seasons into the MLS era, there are no homegrown players that have transitioned as first team regulars.

Reasons why that is could be debated ad nauseum, from earlier lack of opportunities to blocked pathways to simply not being good enough yet. If you look at the current homegrowns in the MLS squad and you look at who is holding down a position ahead of them and how they’ve been playing, there is no-one that deserves a regular starting spot.

It’s concerning, but as long as the talent can be found elsewhere to give the ‘Caps a winning team, it’s not going to be first and foremost on the majority of people’s minds. A winning team is what is important, not the national make up of it. Still, it’s not ideal when you’re pumping that much money into the program.

Perhaps most concerning and disappointing for me is that the young players have been given their chances over the last two seasons and for the most part, they haven’t taken them and risen to the occasion.

When Robbo dropped Kekuta Manneh out of the gameday squad for last Monday’s loss to LA, he said afterward that his message to Manneh and the entire squad was a clear and consistent one – “When you get your chance, take your chance”.

That message is very true for a number of players on the current ‘Caps squad, and not just the Canadian ones.

The most disappointing has been Cristian Techera, admittedly no longer a spring chicken at 24! The Bug has been a different player from last season. He was outstanding when he came here last year, with 7 goals and 5 assists. Then he signed a permanent deal and has looked a shadow of his former self and basically become an ineffective bench player.

With only two assists to show on the year leading up to his penalty goal on Saturday, you have to wonder whether he may be a player that is moved on sooner rather than later if his form doesn’t drastically improve. The ‘Caps need to free up roster spots, although Manneh’s seemingly long-term injury will give him one final chance to prove himself here this season.

And don’t even start me on the non progression of Deybi Flores, who just looks out of sorts in USL, never mind MLS.

So with all of this in mind, let’s turn our attention to the Canadians.

Hopes were high last season that Sam Adekugbe had made the breakthrough into the first team, dislodging Jordan Harvey in the second game of the year. But injuries and the superb form of Harvey did for young Sam, and the veteran has been the Player of the Season so far for the ‘Caps, keeping Adekugbe out of the-line up for all but one MLS start this campaign.

It’s clearly frustrating for Adekugbe and I feel his game has suffered as a result. He looks to have progressed backwards from what we’ve seen from him in his appearances for the USL team and the little first team involvement he’s had. He looks slower, less sharp and right now I don’t see him pushing Harvey at all. For me, Brett Levis has showed more promise at left back this year.

The only way we can see if Adekugbe has what it takes to play continuously at this higher level is to loan him out somewhere to get more experience and crucial playing minutes.

That is due to happen imminently, with Adekugbe set to do a Hurtado and go out on loan to Europe for a few months. And it doesn’t look like he’s going to be alone in heading out on loan this transfer window.

Kianz Froese looks set to be another going out on loan, and like Adekugbe, I feel he needs to. The USL team is either not challenging enough for both of them or they struggle to adjust when they drop down. I can’t work out what it is.

Froese came on as an 81st minute sub in LA. One of the few times the lesser spotted Kianz has been spotted in MLS this season. He’s mustered 150 minutes in five appearances so far, only one of them a start.

He hasn’t taken that next step that most had hoped or expected. His development seems to have stalled in the past few months, and he’s dropped out of the gameday reckoning altogether.

The problem for Froese is finding his role in the team. Robinson feels his best position is as a number 8, a box to box midfielder, saying in February that he is “probably the best number eight we have at the club”. He showed that skill at Residency level and flashes of it in USL. He even started his MLS with a flourish and impressed many, but then it stopped. He’s played more on the wing and has struggled in the adult game there a lot of times (as has Marco Bustos with Robinson inexplicably trying to see what he can do as winger in his most recent first team appearances, although he’s excelled as a number 10 in USL).

Froese has not long turned 20, so it’s far too early to even remotely write him off, but he needs to be playing regularly to find his true position in the pro ranks. A loan deal in a testing environment will hopefully do that and should see him return to Vancouver as a more rounded player.

If Froese is struggling to find his role with the MLS ‘Caps then I don’t even know where to begin with Russell Teibert. Three and a half years older than Froese, if Teibert was not a homegrown player, he would have been cut by now.

Teibert is versatile, he’s cheap to the cap and he’s Canadian. What I’m not convinced of is that he is MLS starting quality at this stage of his career. I frankly do not see what attributes he offers this team that the likes of Ben McKendry doesn’t offer better. Teibert has lost all sense of the attacking part of his game. We had that one breakout year in 2013, when Martin Rennie was convinced by Robbo and Paul Ritchie to give him another chance, then nothing since.

Development-wise, he is another who has gone backwards. If you wanted to be kind you may say stood still at best. He needs to be playing regularly and he needs to nail down what kind of player he wants to be and focus on those attributes. Right now, the team is not better with him in it and it just adds a more defensive feel when he is. McKendry can offer basically the same defensive qualities but much, much more going forward. And he has a shot on him.

If you’re not going to play him in USL, then I would move Teibert in this window. Better for player and club, but unlikely to happen when you’ve named a player “the future captain” of the team. That’s a weight dragging everything down.

It’s not as if these players can say they’ve not been given their chances under Robinson, they have and have failed to shine. When Robbo has gone young in the Champions League and Canadian Championship games, the team have resembled a group of guys who have never trained together, never mind played together.

In part Robbo’s wholesale changes haven’t helped. Mass line-up changes help no-one. The young players need to be integrated into the team slowly, rotationally and have some experienced heads out there to help them along. Too often we’ve seen a high number of guys switched in and there’s no chemistry. Even the guys used to playing together in USL don’t have any when this has happened.

But still, the cream should rise to the top, not look like a curdled mess.

Players have to take those games by the scruff of the neck and take their opportunity to stand out, shine and impress those who ultimately will make the decisions about their footballing futures.

If they don’t, then the opportunities will become fewer and at some point the decision has to come that they’ve hit their ceiling, they’re not offering what the MLS team needs and it’s time for them to seek permanent new pastures. We’ve already seen Philippe Davies, Bryce Alderson and Caleb Clarke cut and not go on to better things. That motivation alone should be enough to give the current crop the kick they need.

As should the knowledge that the likes of Alphonso Davies, Kadin Chung and a slew of USL and Residency talent are waiting in the wings to take their place if they’re not up to the job.

With the Whitecaps U18 side in the final four of the USSDA playoffs, the future conveyor belt of talent is strong and eager to get their chances. This is coming up to make and break time for some of our current crop of homegrown stars.

The ‘Caps can only give them the opportunity to impress. As always, it’s always up to them to then take it.