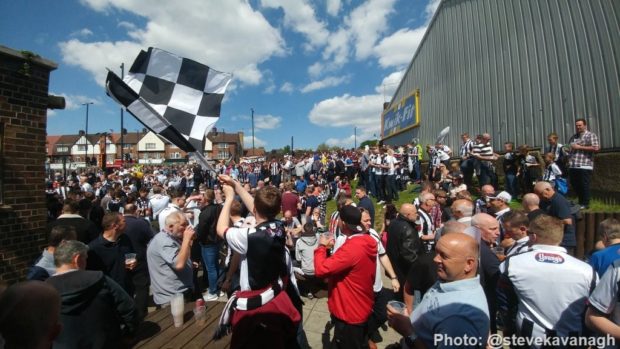 For 13 years the Vancouver Whitecaps were cursed. We had not been able to win the Voyageurs Cup, Canada’s national championship. There were years when there were only three clubs competing for that piece of silverware and time after time our hopes were dashed. We lost it on away goals, goal difference and even on the basis of an abandoned match. But last year, we were determined, and so we exhorted our team to #GetTheFuckingCup; to save space on twitter, #GTFC. And from that moment, Grimsby Town Football Club started following anyone who used that hashtag.

Until Sunday afternoon, Grimsby were a big club that had fallen on hard times. Once a top flight team (in the 20’s and 30’s), they have spent the past six years in the fifth tier of English football. Last year they lost the playoff promotion final on penalties. It was so heart wrenching that the supporters started a crowd funding campaign and raised £100,000 pounds in a campaign called #OperationPromotion. With new players, and renewed hope, they began their 2015-16 season and at the end of August. When #GTFC helped us win the Cup, their fortunes and ours became entwined.

It didn’t take long to discover Grimsby Town culture. It is a venerable club, supported by thousands near and far, eking out an existence in a windy estuary town on the North Sea that was once the home of Europe’s biggest cod fishery.

For whatever reason, there have been decades of great writing associated with the club, and so several of us started reading Cod Almighty, the Grimsby Town fanzine, which publishes a daily diary and mesmerizing, pointillistic, match reports. When a book of Grimsby essays was released, called “We Are Town”, it was sent it along to me by Rich Mills, one of the diarists. Throughout the season, we tweeted and exchanged supporter culture tidbits and even shirts and scarves with each other.

You'll rarely catch me the shirt of a team other than #VWFC, but I'm dead proud to wear this one. #Gtfc #utm pic.twitter.com/NYtdrxaZ0Q

On the pitch our teams’ forms seemed linked as well. As we limped into the playoffs, Grimsby kept up an unsteady yet unbeaten run of their own, quickly moving to the top quarter of the Vanarama National League table, where they needed to finish to have a chance at promotion. As our offseason progressed, and we strengthened our team, they did so as well, with loan signings helping to achieve decent results, beside the hot foot of 30+ goal scorer Padraig Amond. Tuesdays and Saturdays during the winter, Radio Humberside Sport filled my house and I followed along from eight time zones away.

As spring arrived and the Whitecaps began their season with a feeble start, so to did Grimsby Town begin to falter. We were introduced to the term “shitlark”, which is the tag for Blundell Park attendees that booed their team, ripped them on Twitter and called for manager Paul Hurst to be sacked. A similar phenomenon arose in Vancouver during March and April, and you could see a stark resemblance to Grimsby in our style of play, inability to finish off games, and in the splits in the fanbase. Grimsby was faltering and finishing in the top six seemed unlikely. So was Vancouver.

Just when it seemed that all hope was lost Grimsby secured their place in the playoffs, thanks mostly to Tranmere Rovers sucking more. They steeled themselves for a two leg semi-final against Braintree Town, a team of part time labourers that resembled the Translink works yard, judging by how tightly they parked the bus. In the first leg Braintree beat Grimsby 1-0 at Blundell Park and the shitlarks howled in unison, a chorus of jagged, bitter shrieks of abandonment and rage. It was North Sea trolling at its worst.

Last weekend, we knew Grimsby needed to overturn that deficit away at the bus lot. Saturday afternoon we witnessed the Whitecaps reversing a 1-0 scoreline to beat Portland 2-1 and we threw that same charm to north Lincolnshire. On Sunday Grimsby did the same and booked their place at Wembley in a one game final against Forest Green Rovers. Steve Kavanagh, a Southsider Board member, managed to get two tickets for the playoff final, and we approached the singularity. We finally had a Whitecaps supporter in the house for the biggest Grimsby Town match of the last six or seven years.

The Whitecaps did their bit, sending our love, beating Chicago, and then winning a thriller against Toronto, and there was only ever going to be one end to this saga.

Forest Green came out strong, Grimsby calmed the game down. Forest Green came back at them and near the end of the half, with two hard fought goals, Omar Bogle put Town ahead 2-0. In the second half, Rovers clawed back with a wonder strike, but Grimsby was determined to make this one count, and with the new charms in place, Steve in the stands and a number of us watching along whilst enduring popup ads for dodgy Russian dating sites, GTFC finally put the game to bed. They’re going up to League Two.

You see what you want to see, but not every pair of teams share such an interesting and entwined trajectory. Coming into each other’s orbits, we’ve become locked together through the fervent intangible desires of our supporters willing our teams past what seemed like insurmountable hurdles. Until this season, Grimsby and Vancouver only really shared Trevor Whymark, a veritable legend at both clubs. who scored both goals in our 1979 NASL Championship Final. Now we share a pair of victories that seemed only possible with focused curse breaking.

Now we are linked in some way, only really understandable to long suffering supporters. Correlation is not causation, and of course this isn’t really how it all happens, but there is an undeniable feeling that our fates are braided together.

Long may this friendship continue.