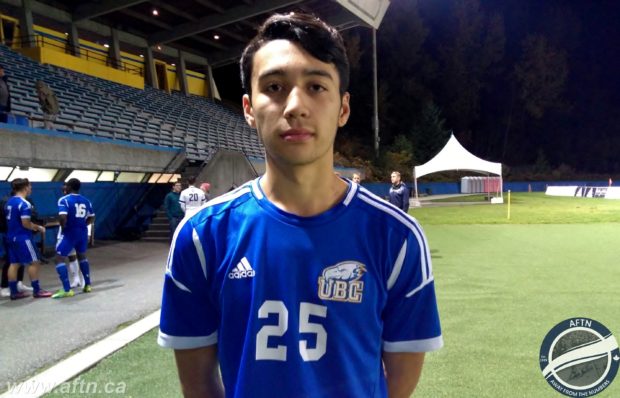 Patrick Metcalfe was faced with the dilemma many youth football players in Canada have to weigh up as he entered his final year in the Vancouver Whitecaps Residency program – should he continue his soccer by going down the college route or should he chase his dreams of turning pro?

Having WFC2 as the set pathway for Residency alumni made that choice a little easier for the midfielder, but it was still a difficult one for the Richmond native to make.

“When I was in the Residency, it was definitely a really tough decision,” Metcalfe told AFTN. “Going to college, getting an education for four years, probably all paid for, or going the pro route. Ever since I was younger all I can remember at school when they said what do you want to be when you’re older, I put professional soccer player, so that was exactly the route I wanted to go.”

But the best laid plans and all that.

No sooner had WFC2 finished their third USL season than we revealed that the ‘Caps would close down the team to affiliate with new expansion side Fresno.

That left players in three camps. Some would be offered new USL Whitecaps deals to go and play in California. Some would decide to go down the college, route, although their NCAA eligibility would now be burned. And some would become free agents.

UBC head coach Mike Mosher found out about Metcalfe’s availability and reached out to him. Initially it was with a view to next season, but once Mosher found out that Metcalfe has been taking UBC courses since last year, it became even better and the 18-year-old would be eligible for the end of the Thunderbirds season and the playoffs.

Metcalfe was announced as a UBC Thunderbird on October 18th. Two days later he made his college debut, in the 2-1 loss at Trinity Western. The following day he grabbed his first collegiate assist in the 3-1 win at Fraser Valley. He now has two playoff games under his belt as well, last week’s quarter-final win over Mount Royal and yesterday’s semi-final victory over Thompson Rivers.

It’s been a whirlwind few weeks for Metcalfe, but he’s enjoyed every minute of it so far and has impressed in his initial outings.

“It’s been excellent so far,” Metcalfe told us. “As you see in our games, the intensity is really up to a high standard. It’s great for me. To come in from Whitecaps 2 and play at a very similar level is good for me.”

Metcalfe joined the Whitecaps Residency program in March 2016 from Fusion FC. The Richmond native impressed immediately, featuring as an academy call up with the ‘Caps USL side before signing his first pro contract in April this year.

The 18-year-old went on to make four appearances for WFC2 this past season, and his progress from the BCSPL to the Residency and then on to the USL team was held us as a shining example for other local young players by head coach Rich Fagan.

“Patrick’s journey is a great story and inspiration for kids who may be waiting for their chance,” Fagan said at the time of Metcalfe signing his USL deal. “He came on our radar towards the end of his youth career after playing at Fusion FC in our partner league with BC Soccer, the BCSPL. We could tell he had something right away, so we offered him a spot in the Residency program. Full credit to Patrick for taking the opportunity and making the most of it.” 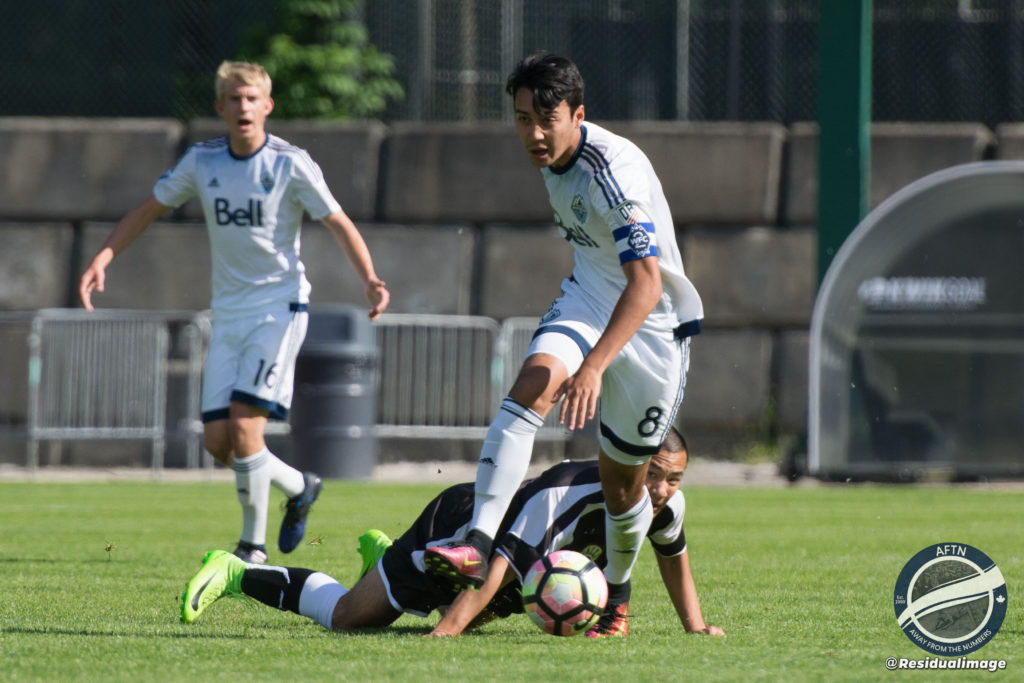 Metcalfe made 13 appearances, scoring one goal, for the ‘Caps in his first season with the Residency, helping the U18s to reach the 2016 USSDA Championship game against FC Dallas. While training with the USL side, he made 33 appearances for the U18s this past season, adding another two goals.

It must have been a somewhat strange experience for the midfielder, going from playing against players younger than him one week and then others nearly twice his age the next, and Metcalfe definitely noticed the difference moving up the levels brought.

“That jump from the Residency, of players trying to get into college, and then you jump up to players that have played in the MLS, maybe players that are a bit older but they are more experienced, is definitely a big jump for sure. In terms of physicality and how they manage the game, it’s definitely a lot different.”

But those matches helped him hone his game and after he signed with the Whitecaps, his development came on apace. You can see that on the pitch now with UBC. His composure, footwork, distribution, and general time spent on the ball, stands out amongst some of the opposition players he has come up against in his first few weeks at the college level.

“It’s been exponential,” Metcalfe said of his personal development after signing with the Whitecaps. “Last year, when we played in the U18 semi-final and final, that was a big eye opener to what’s out there and the different youth academies and stuff.

Metcalfe is now bringing what he learned with the ‘Caps to his new home of learning at UBC.

It’s certainly not easy for any player to come in and try and integrate with a new team right away, especially one that has been playing together for the past couple of years in some cases. But Metcalfe has fitted in perfectly, already looking to be a key component for UBC as they push for a record setting 17th Canada West championship and a 14th national title.

That transition was made a lot easier by having some fellow former Whitecaps on the Thunderbirds roster, in Patrick Izett and Victory Shumbusho, and a lot of other players he’s known for years in BC’s youth soccer circles.

“Oh for sure,” Metcalfe said. “I know a lot of the guys from HPL back in the days when I played with Fusion, so I knew most of the team from before, but they’ve definitely helped me incorporate myself into the group, so it’s been good.”

Metcalfe has been asked to play a few different roles in his first few matches with UBC.

In his time with WFC2 and his last season with the Residency, Metcalfe was more known as a midfielder, playing in either the DM or CM roles, but Mike Mosher has also seen his addition as filling a void in the defence, playing him as a center back in the quarter-final win over Mount Royal and a right back in the semi-final win over Trinity Western.

Although that may seem a little unusual for some ‘Caps observers, it certainly isn’t for Metcalfe himself.

“When I first joined the Residency, I played center back,” Metcalfe told us. “I also played right back for the Fusion. I like to think I’m a pretty versatile player, so I can play comfortably as a center back or anywhere on the backline basically. I’m pretty comfortable.” 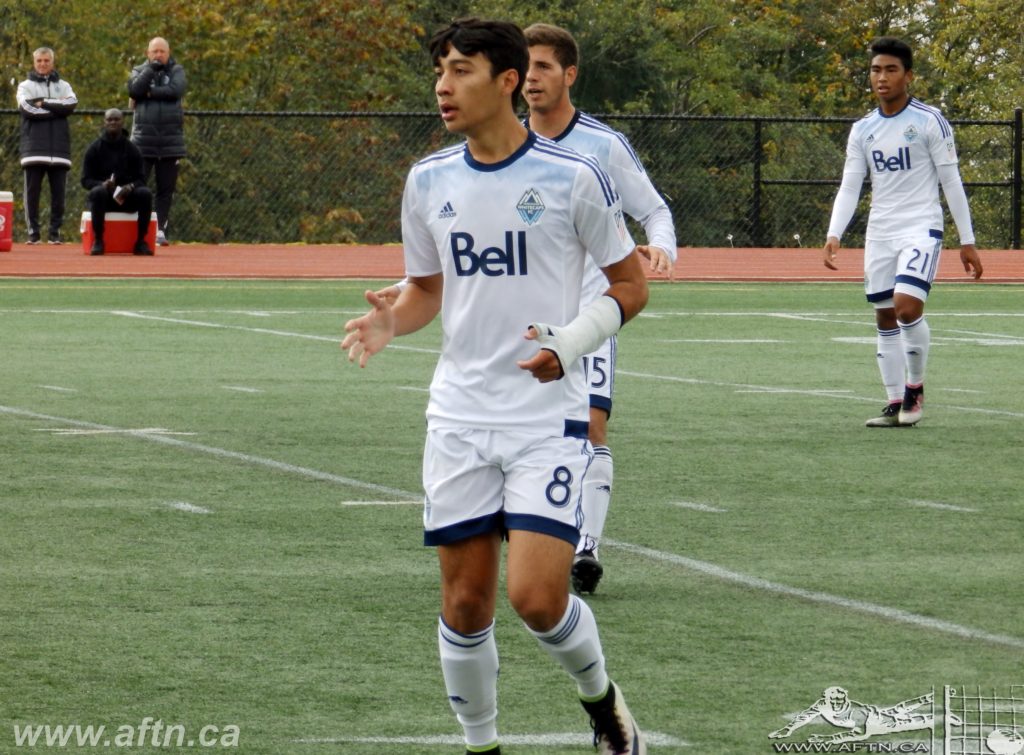 UBC finished the regular season atop the Canada West Pacific Conference. Their 10-4-1 record saw them seeded second overall and they host the Final Four this weekend.

A three goal blitz in the opening 17 minutes saw the Thunderbirds jump out to an early lead, eventually cruising to a comfortable 3-1 victory against Thompson Rivers Wolfpack, and setting up a final on Saturday (8pm kick off at Thunderbird Stadium) against Trinity Western Spartans.

And the chance to win a first college championship less than a month after joining the team is an opportunity Metcalfe is really relishing.

“It means so much,” Metcalfe told us. “Before I joined UBC, back when I was at high school, I used to come out and watch the UBC games all the time. So now, being able to play in the playoffs, in big games, really means a lot to me. I also go to UBC and take courses, so that’s perfect.”

Not that anyone is looking too far ahead, but there could be even bigger celebrations to come for Metcalfe and his Thunderbirds teammates on BC soil this month.

If UBC can get past Trinity Western on Saturday night they’ll head to next week’s nationals, which are being held in Kamloops. With Thompson Rivers hosting, Canada West will only get one spot in the tournament. That means either UBC or Trinity Western will miss out.

The Thunderbirds plan to make sure it’s not them, as they look to lift a first national title since 2013, and Metcalfe knows what a great opportunity it is to do just that in his home province.

“To play it in BC, it would definitely be special,” Metcalfe said. “I’ve played in so many Provincial Cups in Kamloops and tournaments there, so it’s definitely really big.”