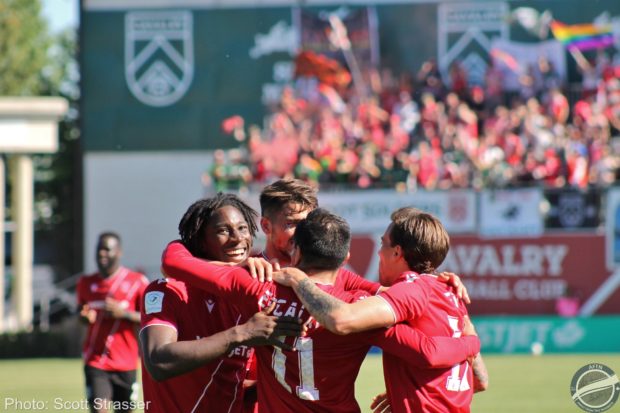 On a sunny Sunday evening that drew their biggest home crowd of the regular season, Cavalry’s win keeps them atop the Canadian Premier League (CPL) standings. The Calgarians have amassed 23 points after 11 matches with a 7-2-2 record.

Cavalry has been on fire since early May, winning seven and drawing one of their last eight matches. The current run surpasses Cavalry’s previous longest unbeaten streak of seven games, which they set in the spring season of the inaugural 2019 campaign.

“I think right now, everyone is pretty confident,” said Pepple in the post-match press conference. “Obviously we know… we’re missing some key players – Myer Bevan, Joe Mason – who are huge parts of our team. But we know the next person is always going to step up, so that keeps us confident.

“We trust in our coach and our abilities. We’ll take it one game at a time. We’ll forget about this and move onto Pacific, and hopefully keep it going.” 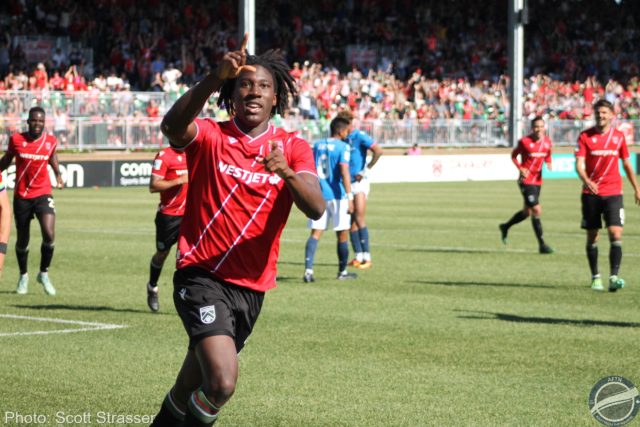 Having made headlines with his match-winning goals in Cavalry’s last three outings, Pepple’s strong play up front remained a talking point on Sunday. The Foothills product’s two-goal performance means the 19-year-old has scored five goals in the team’s last four matches – three of which were game-winning goals.

Pepple opened the scoring in the 26th minute. Central midfielder Elijah Adekugbe collected the ball on the left-hand side, beat his defender, and played the ball into the penalty area. Pepple’s first attempt was blocked, but the ball fell back to him, and he managed to knock in the rebound to put the hosts up 1-0.

Less than two minutes after play resumed, Cavalry doubled their lead thanks to an own goal from Eddies’ centre back Nyal Higgins. Following a long ball into the Eddies’ box, José Escalante cut the ball back from the goal line, and it ricocheted off of Higgins’ toe past goalkeeper Andre Vaikla and into the net. 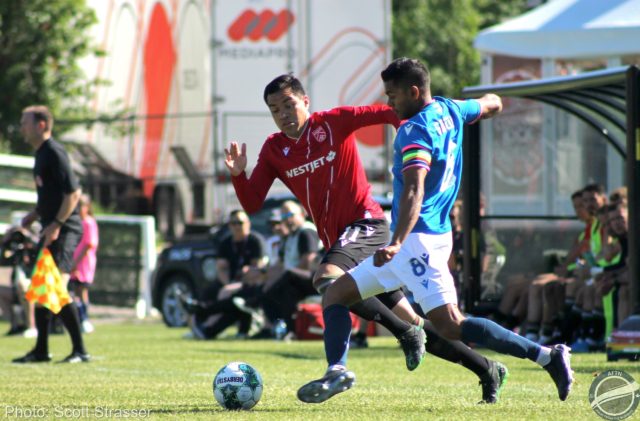 It seemed likely the hosts would head into the locker rooms for the halftime break with a 2-0 lead, but Eddies striker Gabriel Bitar had other ideas. On the stroke of halftime, the former Cavalry striker brought one back for the visitors with a curler of a shot into the top-right corner, past the fingertips of a sprawling Marco Carducci in goal.

It was a just reward for Bitar, who had earlier come close to scoring for Edmonton by firing a shot off the top of Cavalry’s cross bar early into the match.

Despite the minor setback, Cavalry managed to retain their two-goal lead early into the second half. Just a minute after the restart, Sergio Camargo was fouled in the box. Pepple stepped forward to take the penalty, calmly stroking home his spot kick and sending Vaikla the wrong way.

“I think a couple of guys wanted to take it, but when you’re feeling confident… I asked for it, and we have a great group,” Pepple said. “Everyone knows when someone is feeling confident, to let them take it. Thankfully I was able to score. Thanks to those guys. They didn’t have to give it up, but that shows the togetherness of our group. People are willing to give up a potential goal for someone else.” 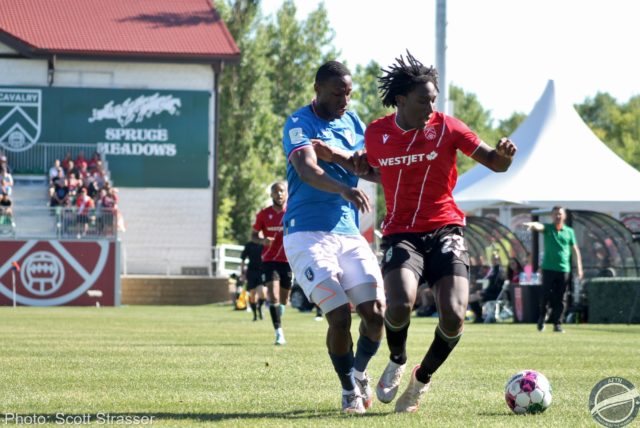 Little else happened for the remainder of the second half, though Edmonton improved upon their first-half performance and tested Carducci with a couple of chances.

“Credit to [Edmonton], they changed their formation a bit and played more of a 4-4-2, and put some more pressure higher up the pitch,” Cavalry head coach Tommy Wheeldon Jr said.

“But I thought we adjusted quite well. We had some really good moments in the first half. I think we let them in at the wrong time. We had a bit of a reminder at half-time. We came out and scored right away, and it made it much easier with a two-goal cushion. We didn’t feel they could score two, but credit to Edmonton, they didn’t stop.”

Cavalry’s next outing will be on June 30, when they travel west to face the second-place Pacific FC, who trail Cavalry by four points, despite boasting two games in hand.