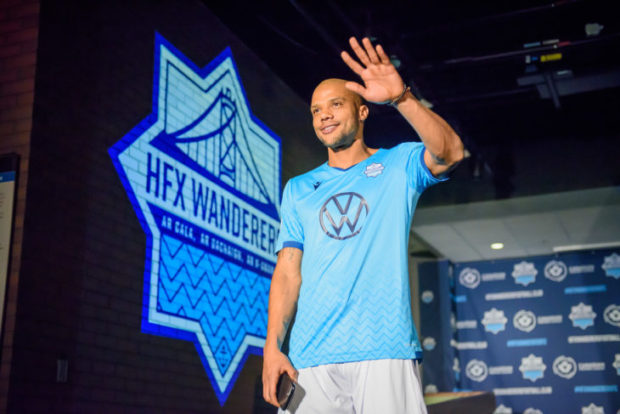 In the 65th minute, shortly after Kodai Iida was bundled down inside the six-yard box, referee Pierre-Luc Lauziere produced a moment of compelling amateur theatre. Ahead of him, The Kitchen bellowed. Below him, Iida pleaded. Either side of him, Pacific players protested. And his response? Nothing.

And this nothing only lasted two, maybe three seconds, but in the context of what was happening, with Wanderers chasing their first league win since May 5th, and a vibrant, pulsing Wanderers Grounds frozen in anticipation, this nothing seemed to drag on for an eternity.

But then he raised his arm, pointed to the spot, and stood back as the ball was calmly slotted to the goalkeeper’s left by Wanderers number 10, Luis Alberto Perea.

Ah yes, Luis Alberto Perea. The Colombian striker, who during his time out with injury was touted as Wanderers’ eventual saviour and the difference between winning and losing, has proved to be, well, exactly that.

A quick glance at Wanderers league record with and without Perea illustrates this:

The mitigating factor here is that Perea’s three appearances in a Wanderers shirt have happened to coincide with their three home games, but his impact shouldn’t be discarded for that reason. HFX Wanderers are a better team when he plays, there’s no doubt.

He’s a fascinating player to watch live because he never seems to do the one thing a footballer at any level of the sport is required to do: sprint.

It’s not that he’s lazy – far from it – more that he just doesn’t really need to. His physicality allows him to dominate the space he acquires wherever he is on the pitch, regardless of who’s surrounding him. Balls fizzed in from deep are inevitably killed dead with a soft touch and defenders are kept at bay due to the way he angles his body when shielding possession. This mixture of technical precision and power gives Wanderers’ wide players and midfielders time to catch up and offer threatening passing angles off the ball.

With Perea on the pitch, an attack that has looked so limited at times this season is suddenly brimming with potential.

Further behind the Colombian, some more green shoots appear to be growing from the ground – namely, Elton John and Elliot Simmons. In the two of them, Stephen Hart appears to have finally found a midfield pairing – and more importantly a midfield shape – that works.

There’s a pleasing balance to their partnership. One stays, one goes. One drops, one presses. And when the situation calls for it, they can play tucked in alongside one another to protect their defenders. It’s not rocket science, but it works very well.
You can see Simmons’ influence growing game by game as Wanderers slowly start to resemble a team made in his image. Watching him drop into the 18-yard-box to receive the ball from Christian Oxner yesterday suggested a growing self-confidence in his role as the team’s deep-lying playmaker. It’s perhaps flown under the radar a little, but over the past couple of weeks he’s become one of the first names on Stephen Hart’s team sheet. 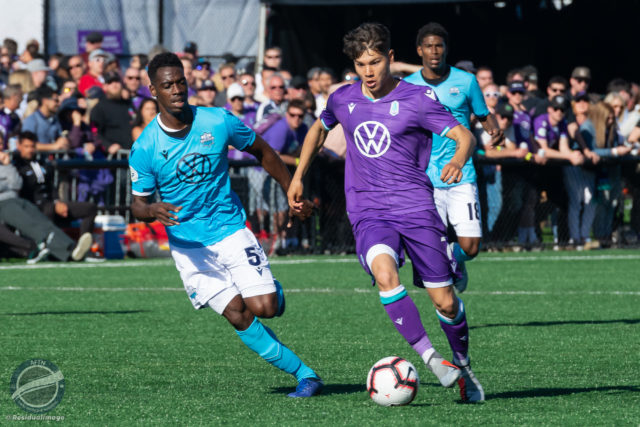 The Trinidadian (pictured above) has been excellent of late, but it’s impossible to really understand how effective he is unless you watch him live. It’s in the flesh that the eyes and ears focus in on the things that a camera following play simply can’t.

The 32-year-old is this team’s leader, that much has become clear recently. His mouth never stops moving. Barking, ordering, organizing. He’s a relentless force on the pitch. One that can be seen, at times, to literally push his team mates into different positions on the pitch during a break in play.

At one point this weekend in the match against Pacific, he appeared to have morphed into the world’s first 360° human as he simultaneously briefed three different players, only one of which was actually next to him, on a number of different instructions.

He was fantastic on Saturday, and all this too under the shadow of a personal tragedy, after the recent death of his cousin, Jason Marcado.

Across the rest of the pitch, Wanderers were impressive throughout. After a long, physical 90 minutes of football on Wednesday, the 10 outfield players could be forgiven for not being at full speed this weekend, particularly against a team coming off the back of two weeks rest. But it wasn’t the case.

Defensively, Peter Schaale and Matthew Arnone continued to build on their impressive partnership by dominating Marcus Haber, despite the big striker’s tendency to float towards the fullbacks to give himself a height advantage in the aerial dual.

Either side of them, Ndzemdzela Langwa and Andre Bona did what they tend to do: run, run, and run. The stamina shown after a gruelling schedule was, at times, unbelievable – both were still making lung-busting runs forward in the latter stages. It was tiring just watching them.

Kourouma (pictured below) continues to be a wonderfully anachronistic throwback winger with a simple MO: dribble forward, beat the fullback, whip in a cross or shoot. It may sound basic, but it’s incredibly effective. 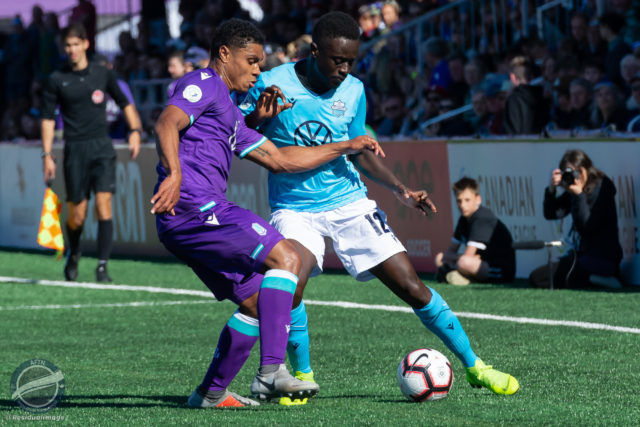 On the right, the scorer of HFX Wanderers’ first goal, Akeem Garcia, remains our most threatening goalscoring threat, even with the return of Perea. His finish for the first goal against Pacific was fantastic. A flick of a paintbrush effort that arched beautifully over the onrushing keeper. A word must also go to Kodai Iida who assisted it with a perfectly weighted ball over the top of the Pacific defenders. It was arguably Wanderers’ best league goal this season.

That’s not to say it was all positive for Halifax. The defending for the Pacific goal was limp to the say the least, and Terran Campbell seemed as surprised as anyone to find himself with a free shot at goal after winding his way through the dangled legs of three Wanderers defenders. There should also be question marks over how wasteful the team have been in possession in the opening half of several games this season. Whether it’s nerves or something else is unknown, but you feel eventually they may get punished for it.

Regardless though, it was a very good day for HFX Wanderers FC. Not only with the result, but also due to the multitude of possibilities the performance hinted at. Luis Perea is fit, the midfield is taking shape, and across the pitch players are starting to raise their levels. It may have come too late for the Spring season, but with the Fall season just over a month away, the signs are encouraging.