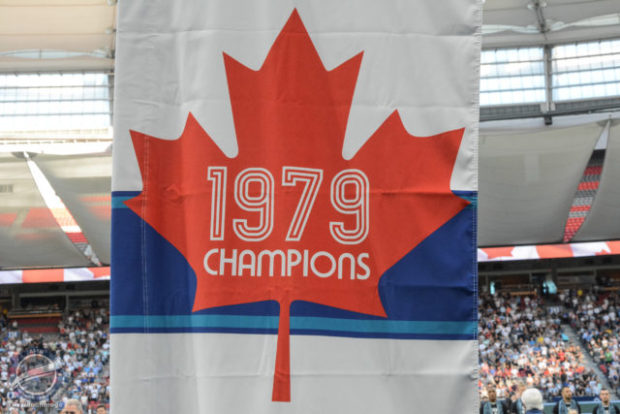 As the 2019 Whitecaps and supporters welcomed the legends of yesteryear to BC Place on Friday night, those 1979 Whitecaps had a busy two game spell this weekend 40 years ago.

Kicking things off was a shortish trip east for a Canadian derby on Wednesday May 30th against Edmonton Drillers.

A crowd of 10,529 at Commonwealth Stadium witnessed a 3-1 Vancouver victory and a hat-trick from Kevin Hector.

‘King Kevin’ opened the scoring for the ‘Caps in the 13th minute, with Jon Sammels and Willie Johnston getting the assist. Edmonton pegged them back before half time though with a goal from Dutch midfielder Hans Kraay.

The ‘Caps went up a gear in the second half and Hector added another two, the first from a Johnston cross, and his hat-trick goal courtesy of Carl Valentine.

That was Hector’s second hat-trick as a Whitecap and made it 10 goals in 10 games for the English striker. For Vancouver, it was five straight wins.

The ‘Caps headed home confident of doing more damage against Houston Hurricane three days later on Saturday June 2nd. The fans were also expectant, and the highest attendance of the season so far, 26,013, packed into Empire Stadium, only to leave disappointment as the ‘Caps suffered only their third defeat of the season, and their second over 90 minutes.

The Whitecaps dominated the match, outshooting their opponents 20 to 6, but it’s getting them on target and in the back of the net that counts and it was Houston that did that in the first half, with Argentine striker Eduardo Marasco getting the only goal of the game.

A disappointing blip along the road, but the Whitecaps were still top of the Western Conference as they got set to embark on a three game road trip. 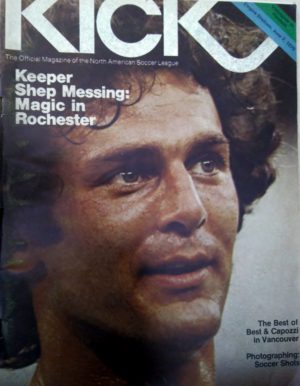 The Kick Magazine for the Houston match featured Rochester Lancers outspoken goalkeeper Shep Messing on the cover and an interview with him inside.

The Whitecaps player feature was on their own goalkeeper, Phil Parkes. Lofty talked about his two previous trips to North America with Wolves in the late 60’s when the NASL teams were represented by clubs from the other side of the pond. The first of those came in 1967 when Wolves represented Los Angeles.

“I was just 17 years old” said Parkes “and it was the biggest thrill and greatest experience ever. It was the best tour I have ever been on, and I’ve been on a lot of them over the years.”

Parkes also toured North America with Wolves in 1972, playing a match in Vancouver, but when he signed for the Whitecaps in 1976 this was his first time not playing for the team he grew up with.

“This was really the first time I played for another team, and at first it was very strange,” Parkes recalls. “I didn’t know any of the players except Les Wilson, but the people in Vancouver were really great, and that was one of the reasons we decided we wanted to come back.”

Parkes went on to win the NASL Goalkeeper of the Year in 1978 and Wilson, who spent eight years at Wolves with Parkes and was now the Whitecaps Youth Development Director, could speak highly enough of the big stopper.

“His record alone proves he is one of the best,” Wilson said. “Not many keepers can claim his length of service or experience in the First Division in England. His likeable personality has always won him friends and fans, and his contribution to a team both on and off the field is tremendous.”

Other articles in this particular issue were a five page profile piece and interview on Chicago Sting’s Karl-Heinz Granitza, part six of the series teaching coaching skills to youth players, this time around dribbling, and the first part of a history of the league, chronicling the years 1966 to 1968.