Portland Timbers are whipping Vancouver Whitecaps arses at the moment. Clearly not on the pitch, because we all know that we have Portland on the mantelpiece when it comes to trophies and success. No, the Timbers are beating us hands down off the pitch in the marketing department.

With MLS now just over five weeks away, we’re all abuzz here at AFTN Towers. So are Whitecaps fans throughout the lower mainland. If you look around the city though, you’ll be hard pressed to see a Whitecaps takeover and advertising blitz. Take a trip down the I5 to Portland though and it’s a whole different story in Timbers territory.

You have to give full kudos to the Timbers marketing guys. They’ve been doing a tremendous job. Having bought tickets for away matches down at Piggy Park in recent seasons, I now find myself on their regular mailings and I can’t even begin to tell you how impressed I’ve been by what they’ve done.

For me, they’ve had two marketing masterstrokes. 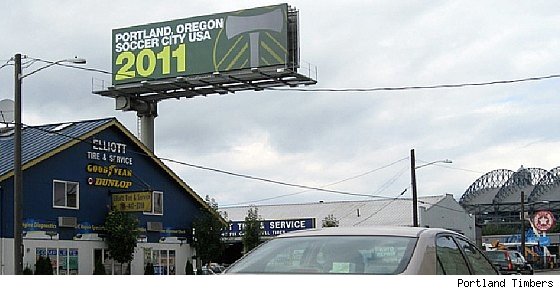 The first one was this ingenious billboard which appeared pretty much outside Seattle’s Qwest Field in September last year. Whoever came up with this deserves all the awards going. I’d have loved to have seen the Flounder faces when they first saw it.

They followed this up with a very impressive “We Are Timbers” advertising campaign featuring real fans and in particular, hot women. They’ve even brought back Timber Jim for one of the ads. Respect all round.

The “We Are Timbers” campaign was another piece of marketing gold. Whoever the Timbers have got on board in that department have been top notch. On the whole, the fans loved it and really bought in to it and even opposition fans grudgingly nodded in approval.

When they were launched in January, the Timbers also had three days where fans could go along to the team store, “pick up an axe and strike a ‘No Pity’ pose” and you could get your very own campaign picture taken for free by a professional photographer. I nearly went down myself it was that cool an idea!

The Caps of course did some fan ads last season. Three in fact. I thought I’d mention that there were three done as you may not know this since they only seemed to really focus on promoting one of them and they can’t use that one now that Martin Nash has retired.

Shame because there was a great idea discussed for using a giant version of this ad, having all the fans sign it at Swangard then taking it to Empire and BC Place as a nod to both the old and new Caps.

The campaign was a great idea and was a great fun to be part of. They were entertaining and attention grabbing ads but they seemed to be woefully underused. Maybe the TFC penalty kick one will see the light of day again at some point soon and be plastered all over the city. That would be the sensible thing to do… 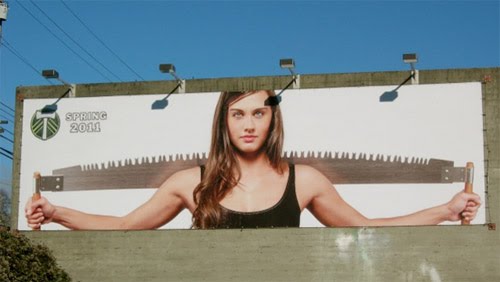 The latest Timbers marketing nugget was giving fans the chance to create artwork to adorn a Boeing 737-700 in a “Paint the Plane” contest, in conjunction with their sponsors Alaska Airlines.

The Timbers-branded plane will be revealed this spring and the prizes on offer were pretty impressive, apart from the part where you actually had to watch a Timbers game.

I thought about entering a plane covered in flames to represent the Timbers Army’s hopes and dreams crashing and burning for the seasons that lie ahead. Maybe the Whitecaps will be inspirsed by this and the fans will get the opportunity to submit painted Bell-ends.

Even away from all these glitzy gimmicks the Timbers have been trying to involve the fans at every opportunity and make them feel part of the whole MLS experience and part of the club, their club.

They held community tours at the end of January to allow fans a first-hand look at stadium renovations currently taking place at the Piggery. The 30-minute tour included an up-close viewing of the renovations, a presentation from Turner Construction and complimentary pizza from Papa Murphy’s.

Other initiatives include setting up a “community fund” which will distribute $100,000 to non-profit youth focussed organisations in the greater Portland area and creating a kids supporters club. They even have Big Brothers, Big Sisters and tree planting programs ffs.

One of my particular favourite initiatives though was “The Axe Society”. Everyone who became a season ticket holder by the end of last year got life membership. Amongst the various discounts and gifts, members had their name listed in a permanent display at Piggy Park. Cracking idea akin to the various “buy a brick” schemes run by many UK clubs when they move or renovate stadiums. Would have been great to have something like this for us at BC Place as a lasting memory of our loyalty to the cause.

I could go on but this already starting to sound like a Timbers love-in and wankfest. It’s hard not to be impressed though.

When you consider the clusterfuck the Timbers FO had on their hands with the MLS crest launch back in June, they’ve turned all the bad feeling and animosity around and are creating an exciting buzz. A buzz which will admittedly be killed when the fans see the shit that’s on the pitch come March, but a buzz none the less.

The Caps on the other hand have, um, well, fuck all really. Nothing mind blowing. Nothing to be the water cooler talking point city wide. The odd bland ad here and there. What they have been good at is giving myself and many others the impression that they are disorganised and not clued in when it comes to marketing a MLS buzz. Oh the stories I could go into about the various shambles that I encountered with them first hand last season. That can be for another day though.

Some within the Caps may argue that there has been no need to do flashy advertising campaigns as season ticket sales have been better here than in Portland.

The Caps of course haven’t released any actual figures, but if you believe their hype, the 16,000 target mark set isn’t worrying them. The Timbers on the other hand have been moving slower than Bright Dike and have just crept over the 11,000 mark (they’re capping their season ticket sales at 12,000).

It shouldn’t be about ticket sales though. It should all be about building the ‘brand’. Creating that buzz that has everyone in Vancouver, the lower mainland and beyond talking about Vancouver Whitecaps FC. To generate something where you’re sitting on the skytrain and the asian girls in front of you are saying “did you see that great Whitecaps ad”.

Surely I’m not asking for too much here. Just a bit of promotion and buzz and the chance to make the fans feel close to the club and not distant from it.

What about some open training sessions or an open day where we can meet the players and legends, get autographs, take part in a penalty kick competition and share our excitement with like minded fans? We can’t even get a home pre-season friendly to whet our appetites.

Maybe the Caps do have something like this up their sleeve. If they do, then let’s hope it’s not going to be like so many things last season and all at the last minute.