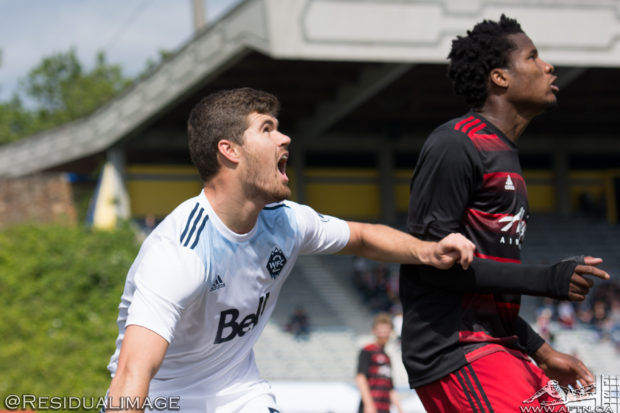 Thomas Sanner has had a long wait to make his professional debut with Vancouver Whitecaps.

Sanner was a second round selection by the Whitecaps in this year’s MLS SuperDraft, going 36th overall. Signed with a view to playing in the USL with WFC2, the rookie spent some time in the ‘Caps MLS preseason camp before training and playing some friendlies with the USL side.

WFC2 coach Alan Koch and the Whitecaps liked what they saw from the 6’4″ striker and were keen to offer him a deal. Sanner wanted that too, but at the back of his mind was a nagging dilemma.

Sanner was studying politics at the prestigious Princeton University, joking that he “got out of America just in time”! He still had a few months, and courses, to go before graduating and was faced with deciding whether to put that on hold to follow his footballing aspirations or put those hopes on hold to finish his degree.

After discussing his situation with Koch and the Whitecaps, the decision was made that Sanner should head back out east, finish his education and a contract with the ‘Caps would be waiting for him on his return.

Fast forward a few months to Sunday, and Sanner finally got to step on the pitch in a competitive match for the ‘Caps, coming on as an 83rd minute sub in the WFC2’s 1-0 win over Portland Timbers 2, just two days after signing his first pro contract.

“It’s very exciting,” Sanner enthused to AFTN when we caught up with him after the Timbers game. “The Whitecaps organisation were awesome throughout. They allowed me to go back and graduate from school and then sign a deal starting a couple of days ago. It’s been awesome. Great group of guys that have just welcomed me into the team like part of their family and it’s great to get the win on my debut.”

So what was going through his head when he finally stepped on the pitch for the first time?

“Dreams come true,” Sanner said with a beaming smile. “It’s something you think about when you’re a little kid and being able to get the chance, on Father’s Day, you just think about everyone who’s been part of your journey to get to that moment. It’s a pretty awesome feeling.”

Koch is delighted to have Sanner on his squad. Another attacking piece in what has been a very impressive aspect of the Whitecaps this season, Koch explained how the decision to delay signing the draft pick played out.

“He was drafted, spent some time with the first team preseason, then came and spent some time with us in the USL,” Koch stated. “We wanted to sign him then. He’s obviously a very smart guy. He went to Princeton. and he came and spoke and you could tell the weight was on him because he felt he owed it to himself and his family to go back to Princeton and finish his degree.

“Having come from the academic environment, I completely see that. We supported it and he went back. We stayed in touch with him the whole time and got him signed up and we’re excited to have him here now.” 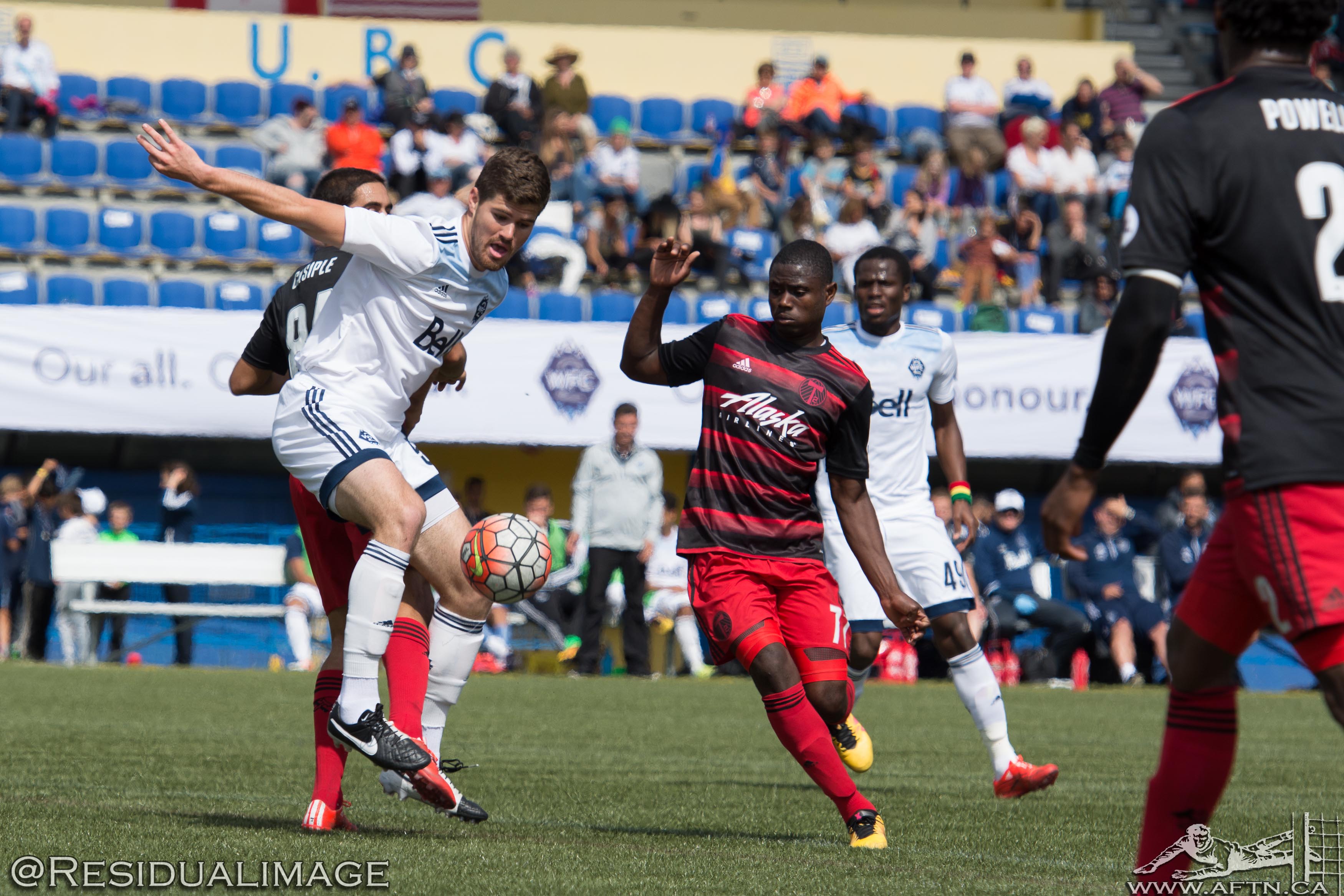 No-one is more delighted than Sanner to have had the opportunity to go back and finish his degree. Well perhaps his father. Delighted that his college days are finally over, Sanner can now fully concentrate on his footballing future.

“It’s all done, it’s all done,” Sanner said excitedly said of finishing his degree. “No more worries! I thank Alan and the whole coaching staff so much for allowing me to get that weight off my shoulders and be able to focus really on soccer 100% for the first time in my life and not have anything else to worry about.”

Joy, satisfaction and relief are three of the emotions Sanner went through twice. First in finishing his education and then when he got that official contract offer signed. It was a big decision for the 22-year-old, but certainly the correct one, and he explained why he felt that now was the best time to make it and the thought process behind it.

“Well my dad would say it was the money,” Sanner laughed. “But no. I obviously came out and tried to do the best I could and give it my best shot, but as it went on I felt that if there was a time to go back, it’s going to be right away. Because if I didn’t go back this semester, you start your pro career, you get your debut, but at some point, you’ve got to go back and finish that last semester.

“It was a hard decision for sure but it just made the most sense to get it out of the way now and then not have to worry about it when I came back. I’m definitely happy that they allowed me to do that.”

But distance hasn’t kept him too far from the team, and Sanner has been avidly following WFC2’s excellent start to the season online, and knows what a talented team he’s now an official part of.

“Yeah, it’s been great,” Sanner revealed. “The USL on You Tube is awesome. I watched as often as I could. It was amazing to see them get off to such a great start and now hopefully keep it going.”

Aside from watching the games, Sanner has been doing his best to try and keep in shape and on pace with his new teammates, not easy when the college season was over in November.

Preseason must feel such a long time ago, with no pro environment to train in or competitive matches to play in. It’s hard to keep yourself sharp and up to the levels required for playing in USL, but Sanner had a unique way to get around that.

“I was able to [train],” Sanner revealed. “For the spring for Princeton, I actually became an undergraduate coach. So I was able to train with the team, coach a little bit, I hope, and definitely get in. I wasn’t able to play in games, but practiced a lot, and then one of the assistant coaches there, pretty much every day we did 1 v 1 training which was awesome. David Goldstein. He’s going to be big someday.”

The Whitecaps are having an excellent season. Top of the West and approaching last season’s points total by the half way mark of this campaign. Things are going well, but there’s still a lot of room for improvement in certain areas.

Taking more of the chances they create is one of those, much like the first team. Sanner will be hoping he will be the man to do that, but what else does he feel that he can bring to the ‘Caps?

“Just another physical presence up top,” Sanner told us. “Run around and just get on the end of things in the box. There’s nowhere to go for them when I get here than down because they’re already on top! Hopefully we can just keep that going and whatever the team needs from me, I’ll do.”

Koch is delighted to finally have Sanner on the team. The success of Kyle Greig this season has shown how well a big target man fits in with this current Whitecaps side, with the fast wingers and a hard working Daniel Haber feeding him in and playoff off him in and around the box.

He’s still very much a raw talent, but the hope is that Sanner can offer more of the same, and Koch feels he will bring a lot to the ‘Caps squad.

“He’s a big, strong athlete,” Koch said of Sanner. “Great attitude. Great mentality. I think you saw that in the few minutes that he played. He’s obviously got to get in and get comfortable. He’s only trained with us twice this week, so he’ll get comfortable with how we play.

“He’s obviously got to get sharp. You could see that his touch wasn’t the greatest at times, but for a big man, he’s got a very, very good touch. We’re excited to work with him for the next months and see how far he can come along.”