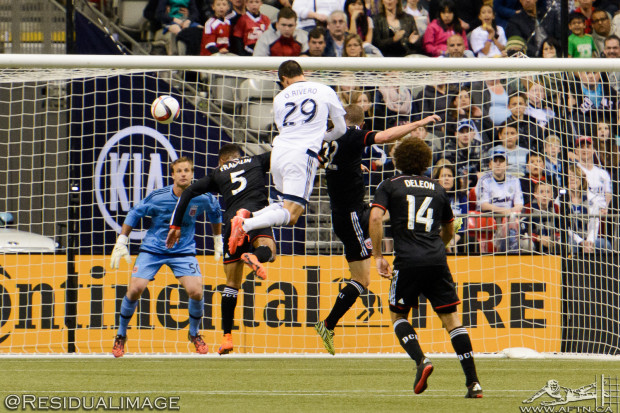 They’re unbeaten in three, with back to back clean sheets. Can Vancouver Whitecaps continue their good run of form against a struggling, and winless, DC United side? How big an impact will missing DP’s Matias Laba and Pedro Morales have on the match and the ‘Caps line-up? And does this game have 0-0 written all over it?

We take a look at all this and more.

The ‘Caps got a point out of a very tough home game against LA Galaxy last weekend. Going down a man is never an easy task, but the players on the field came up big and battled to get a point out of it. Wait though, let’s make the game harder by having your star player get injured, and then one of your promising youngsters also get injured. I can say that it was fun game to be at; the whole supporters’ section was a rowdy bunch cheering every tackle, header, clearance and save.

The Whitecaps are now undefeated in three games. That’s good! However they have failed to get a goal from open play in any of their six matches so far this season. That’s bad.

Our defence seems to be getting back to the impenetrable fortress. That’s good! But we have just lost our star midfielder, and Designated Player, Pedro Morales to injury for what looks like being weeks. That’s bad.

This is going to be an interesting time for the Whitecaps. They’re certainly looking like a mixed bag right now. It may just come down to the mentality of the players to push through this tough time and get some results, and the desire of the fringe players to step up and stake a claim on a starting spot.

DC United are in a bit of a spiral. They have not won a regular season game this far. Although they have scored from open play, they don’t seem to have the best defence. Part of that may also be down to the fact that Bill Hamid is out (and will be for a long time). Not only that, but their backup keeper is also injured. All that, combined with the poor start, means they will be looking to prove something. But will also give Vancouver hope of going there and getting their second straight away win.

The Whitecaps were looking to play some form of a 4-2-3-1 against the Galaxy, but that got derailed very quickly. With Morales now out for a few weeks and some continued doubts about the health of Kekuta Manneh, there are some interesting questions about the ‘Caps formation moving forward.

Given the weakness of DC United and the strength of our defence, this could be the set up for a classic smash and grab. I would look for Robbo to play the 4-2-3-1 again. However, we could be reaching back to last year when we had a very successful run of games with Mezquida sitting in the attacking midfielder centre role.

Last game, the 10 men played their hearts out for the crowd at BC Place. Throwing back Galaxy attacks and probes with amazing organized efficiency and a few moments of heroics.

Speaking of heroics, David Ousted produced another highlight reel ‘save’. This time with his face. He was fantastic throughout, yelling instructions and collecting crosses and through balls. He got the point for the Whitecaps and he continues to be a superstar goalkeeper. Clearly, he continues to get the start.

More heroics came from the centre back pairing of Kendall Waston and Tim Parker. The big men made a number of key tackles and headers to break up plays. They had excellent positioning. The only thing I could say is Parker occasionally slipped due to some turf monster presumably. It led to some awkward moments where his team mates had to bail him out. That said, they should both get the nod against to start in DC.

Fraser Aird was solid again as well. The Galaxy had seemed to pin him as weakness, and instead he became a bulwark in defense. He made five tackles in that game. He rarely put a foot wrong in his positioning and, before the Laba red card, he was making good runs forward. All I can say is he is learning his position quickly. The work the coaching staff is doing is working wonders, and he should be given the chance to continue his progress.

Jordan Harvey had a solid game as part of the backline. He was a bit more conservative, but then they were not charging down his side as they were on Aird’s. I would see no reason to touch the backline after that performance, and the same goes for Harvey.

There is an outside chance that Robinson may see this game as a change to rest Harvey and pitch in Sam Adekugbe for his first start, but with the other absences and the solid look of the back four, I think the young Canadian will have to wait for his chance.
Now we move the midfield and this is where things start to get interesting.

Let us start with the wingers. Cristian Techera and Christian Bolanos looked great out there. The Bug was participating with some huge reserve of energy, he got back and was making tackles and trying to get things going against the flow of play. This game highlights the defensive work that he can put in. He was smart in positioning and, true to his nickname, was pestering all the attacks LA were sending his way. I think he should definitely be getting the start in DC. The question is on which side?

Bolanos looked good coming in for Manneh. He helped anchor the left side with Harvey. However what impressed me most was his ability to manage the game. Time and time again he was able to shield the ball and make a smart pass forward. Many of the attacks we made after the red card came along his side, due to his intelligence when he possessed the ball.

The trouble is, Bolanos got a dead leg and looks to be out for this one, if this tweet from him is anything to go by:

So a couple of big questions? Is Bolanos out and if so, should Manneh be playing?

Manneh is apparently okay. He’s trained all week, but perhaps it is time to give the ankle a bit of a rest. When he was on the field he was not playing to his capacity and considering that we are missing Morales as well, perhaps let all the creative players work the ball forwards instead of long balling it to Manneh.

So if Manneh is rested, and Bolanos can’t go. Who gets the wing start? It could be Kianz Froese. It could be Masato Kudo. Or it could force a formation switch.

Whatever happens Nicolas Mezquida should be set to continue in the number 10 role. You can’t really replace Morales but Mezquida has previously shown how well he can put pressure on the ball and force turnovers. His passing is creative and he looks to have good chemistry with his fellow Uruguayans Techera and Octavio Rivero. Could he be the secret to unlocking Rivero’s goals this year?

Rivero will likely get the start up top in DC. He was okay with the service he got again the last game. Hopefully in this match we can get a bit more of a service. I was not too worried about the whole non-scoring from open play situation as soon as the red came out, but it is something that we need to deal with.

Which brings us in part to the next question. Who should be starting between the striking pair of Blas Perez and Kudo? Or is the answer both or neither? Definitely looks like being a one striker formation again this weekend, but we could see with Perez or Kudo playing on the right to bolster the attack a little.

Back deeper in the midfield, Andrew Jacobson should be getting the start. He was fantastic in the last two matches. Although in the LA game he dropped back so deep that we had a 5 man back line for some periods of time. It would be nice to perhaps see him get a bit more forward than last game and utilise his shooting skills.

Whether we will see Russell Teibert or Kianz Froese back alongside of him will be somewhat dictated by the final formation and who takes the spot in the right side of the midfield.

DC United play with the traditional 4-4-2. They like to use their wide men as the danger men who make things happen (Lamar Neagle, and Patrick Nyarko). Although Nick De Leon and Marcelo Sarvas are good midfielders, DC United tend to leave them stranded to run the midfield. That may allow the Whitecaps to get an advantage in the centre of the park. Win there and the ‘Caps can strangle the offence of Chris Rolfe and Fabian Espindola.

It will be important that the ‘Caps, if they can’t win the ball back in the middle, get the defensive shape correct to shut down any long shots and to not give away any set pieces near the goal. Steve Birnbaum is a very good central defender, and has great strength and ability to read the game. If we start playing long balls up to Rivero it will be important to do so when he is matched with the weaker central defender.

If the Whitecaps can do that, with all the creative technical players up front, perhaps we can use a short passing game to create an easier chance to score from, and there’s always the ability to whip in crosses. We just need to finish them.

Who will step up creatively while Pedro Morales is injured?

Can the depleted Whitecaps win the battle for midfield?

Will this be the game that the Whitecaps finally score from open play this season?!

Patrick Nyarko. He is a fast winger who likes to dribble. Given enough space he can cause problems.