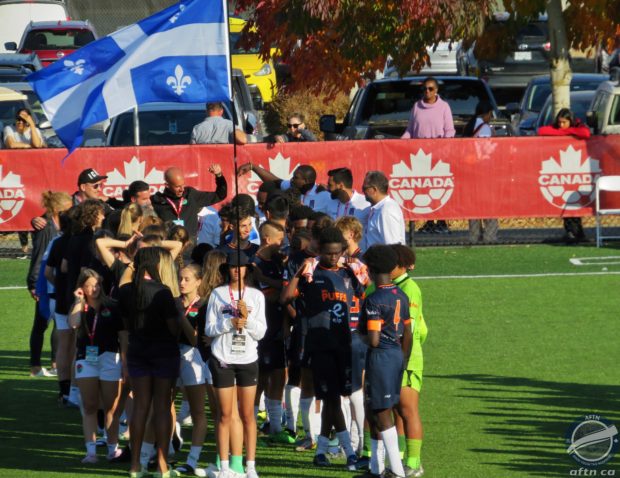 It’s a good year to be a Quebec soccer fan.

On the back of CF Montreal flying high in Major League Soccer and AS Blainville winning the inaugural League1 Canada Women’s Inter-Provincial Championship, the 2022 Canada Soccer Boys and Girls National U17 Championships wrapped up on Thanksgiving Monday in Surrey, and when the last ball was kicked it was the two Quebec teams that were left standing tall, with Union Lanaudiere-Sud and CS Saint-Laurent both taking home the gold and seeing their name etched on the respective trophies for the first time in their clubs’ histories.

It was a fantastic week of football at Newton Athletic Park, with hosts Surrey FC putting on a great tournament that saw fantastic action, cracking goals, and some standout performances both on an individual and team level.

On the Girls side, Union Lanaudiere-Sud were dominant from start to finish on their way to winning the first national title in the club’s short history. 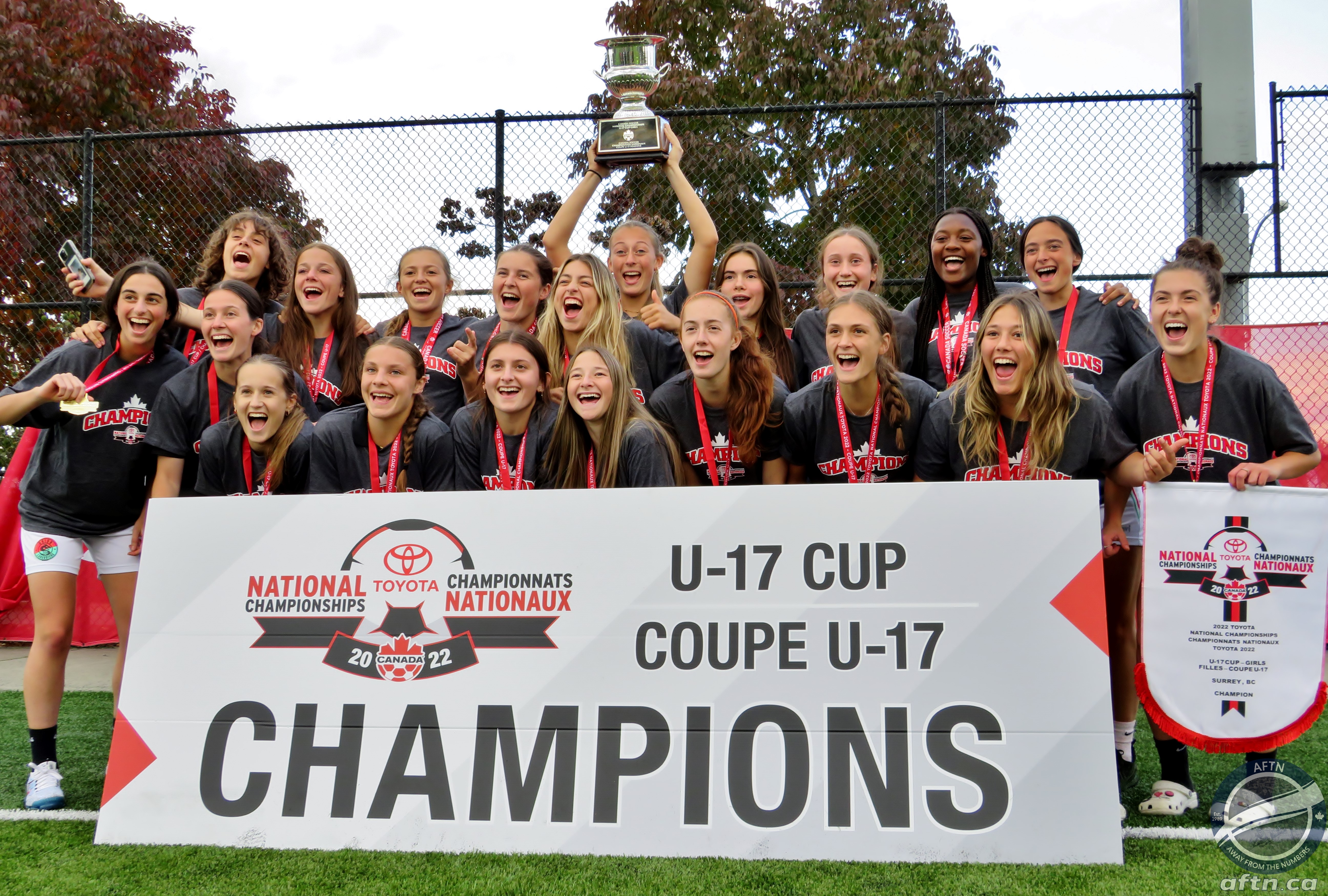 Formed in 2019, ULS is the unification of four former youth clubs – AS Mescouche, CS La Plenna, CS Terrebonne, CS Repentigny. When the full unification was agreed by members from all four clubs by the end of 2020 it was the largest merger of clubs in Quebec soccer history, forming the largest club in the province as a result, and it’s a team with big ambitions and plans.

That booked their place in the final against Ontario Cup champions Caledon United in Monday’s final and it was a dramatic game of twists and turns that was eventually settled on penalties.

Mia Eva Girgis fired ULS into a 92 second lead, her 8th goal of the week that also saw her pick up the tournament’s Golden Boot on the girls side. Caledon pushed for an equaliser, with Alessia Donia cracking an effort off the post in the 24th minute, but the Ontario champs eventually got back on level terms in the 33rd minute when Isabella Mazzaferro tucked an Isabella Chiapetta ball across goal away on the goalline in the 33rd minute.

With no further goals in the second half, and no extra time played in the tournament, the game headed to penalties at the end of the 80 minutes, and as always has to be the case, there was joy and heartache in equal measure. ULS saw their first kick saved, Caledon missed their second, and they were tied at one apiece. Each team converted their next two attempts and it moved into the fifth round. ULS captain Maeva Costenaro drilled home her kick to give the Quebec side their first lead of the shootout and pile the pressure on Caledon’s Abbie Russell. Heartbreakingly for the young defender, who had had a magnificent tournament, she blasted her kick over the bar and as she slumped to ground in tears, consoled by her teammates, Union Lanaudiere-Sud and their supporters celebrated a famous win.

It was no more than the Quebec side deserved. They had been tremendous the whole week. Head coach Dorian Bourgeois, a former professional soccer player in France with RC Lens, has been with this group for the last eight years and has put together a team stacked with talent from back to front. The future looks very bright for a number of these girls and also the club itself, who have plans to join League1 Quebec in two year’s time and field male and women’s senior teams. I’m sure many of the players from this final will feature in those future plans.

Next on the pitch in Surrey was the Boys final with Quebec champions CS Saint-Laurent taking on Alberta’s BTB Soccer Academy from Edmonton.

Former in 1982, CS Saint-Laurent are celebrating their 40th anniversary. After winning two silvers and two bronzes at previous nationals, the last of which came in 2019 with a certain Ismael Kone in their side, they wanted their first ever gold in their anniversary year, and they got it in some style. 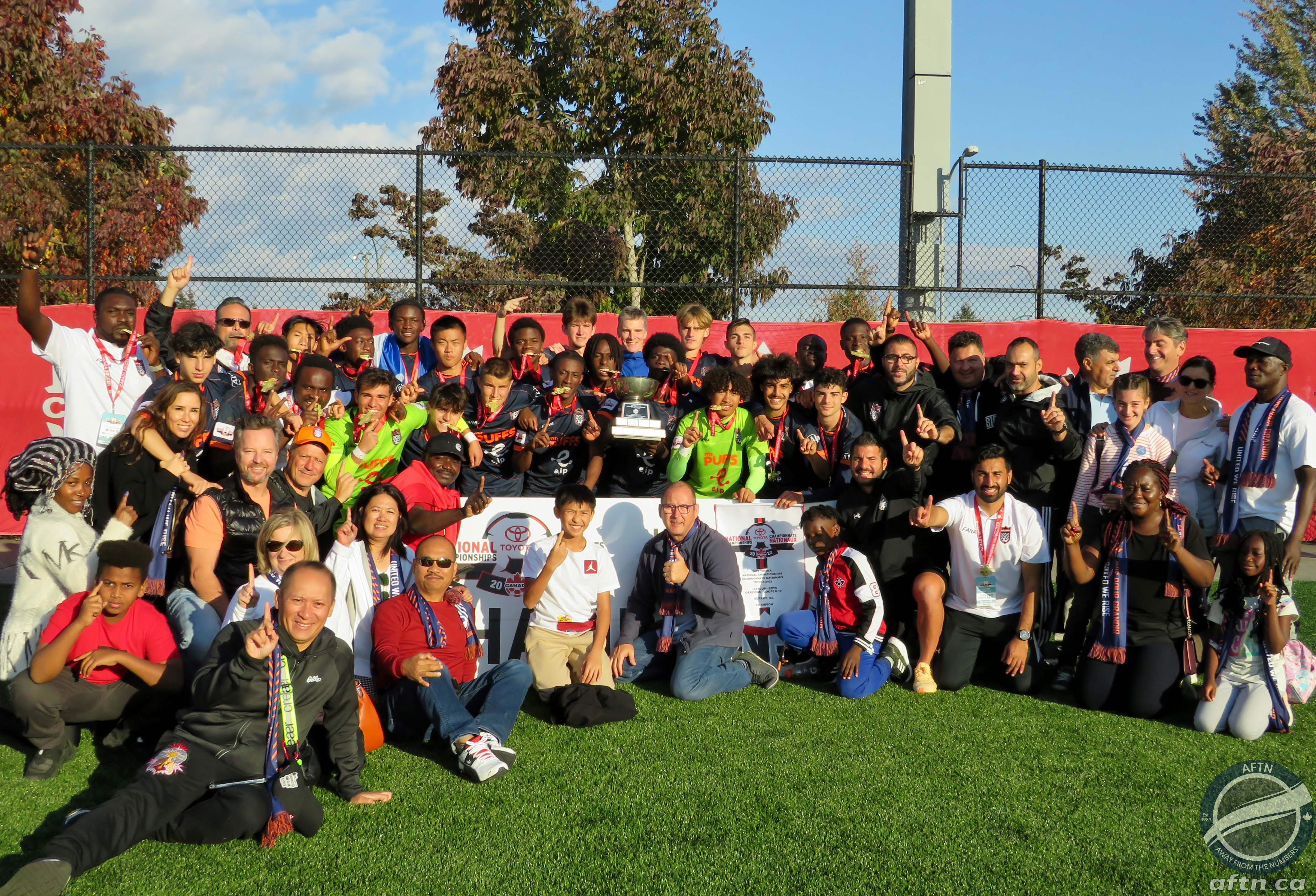 As with Union Lanaudiere-Sud on the Girls side, CS Saint-Laurent were dominant on their way to the final.

Drawn in the two team Group C with Newfoundland and Labrador’s Paradise SC, they won both of their matches 3-0, with striker Marco Marinaro leading the way with three goals. They followed that up with another dominant 3-0 win in the semi-final against Ontario champions Glen Shields FC to book their place in the gold medal game against BTB.

And in a cracking, fast-paced final, CS Saint-Laurent were given their toughest test of the tournament and lived to tell the tale. The more dominant side in the first half, the Quebec champs took the lead 18 minutes in through one of their players of the tournament, Alexander Henderson, rifling the ball into the postage stamp corner from just outside the box.

Despite pressing for their second, BTB held off the attacks and came out looking more dangerous in the second half. They got their reward in the 53rd minute when the lively Choosen Jones curled a free kick low into the bottom left corner to level things up.

This only served to spur CS Saint-Laurent to find another gear and they came storming back to see out the match in some style. Tenena Ismael Yeo rose superbly to head the Quebec side back into the lead and there was no looking back after that. Marinaro got the reward his play deserved, capping off a great tournament for the big striker with his Golden Boot tying fourth goal four minutes from time to give CS Saint-Laurent a 3-1 victory and the gold medal they craved in their 40th anniversary year.

For head coach Maxwell Arhin, who has worked with this group since taking them on at U13 level, it’s been a long but fruitful and fulfilling journey.

“I’m feeling so great because it’s something I promised them since 2013,” Arhin told AFTN after the match. “It’s actually my fifth time coming here. We started with the 2000 generation, then worked with the 2001 generation, 2002 generation, 2004 generation, so with these guys I’m so happy because I wanted this team to be the first team to win a gold medal for the club and I’m so glad we did it.”

And CS Saint-Laurent capped off a great Nationals week for the Quebec sides, with CS Longueuil lifting the U15 Boys title in Charlottetown, PEI, also beating Edmonton’s BTB Soccer Academy in the gold medal match.

So what has Quebec soccer flying so high right now? There’s a lot of factors, but for Arhin, there’s on in particular that stands out.

“The kids now see hope in soccer in Quebec,” Arhin explained. “Before that they were looking and they were not seeing anybody from Canada making it. Then all of a sudden we see Alphonso Davies going to Europe, and Jonathan David, so the kids start to think, okay, we can see it. Actually the boys were talking about that.

“The World Cup being in Canada next and also Canada being at the World Cup for the first time [in their lives], they feel like it has brought light on Canada. Quebec has always had the talent. I played in Quebec, I played Canada U17, it’s just we didn’t know, we didn’t have hope of going high, but these kids with social media, they can post their own videos and stuff, so they feel that they can make it and now everybody is stepping up. That’s why I think it’s making it.”

As with the girls on the Union Lanaudiere-Sud team, the guys on the CS Saint-Laurent side look to have bright futures ahead of them, with a number going to colleges in both the US and Canada, and some going overseas for trials. For the club itself, they’re expanding and thriving. They launched a League1 men’s side in Quebec this summer, finishing second in the league in their inaugural season and just missing out on the title and a Canadian Championship spot by four points. 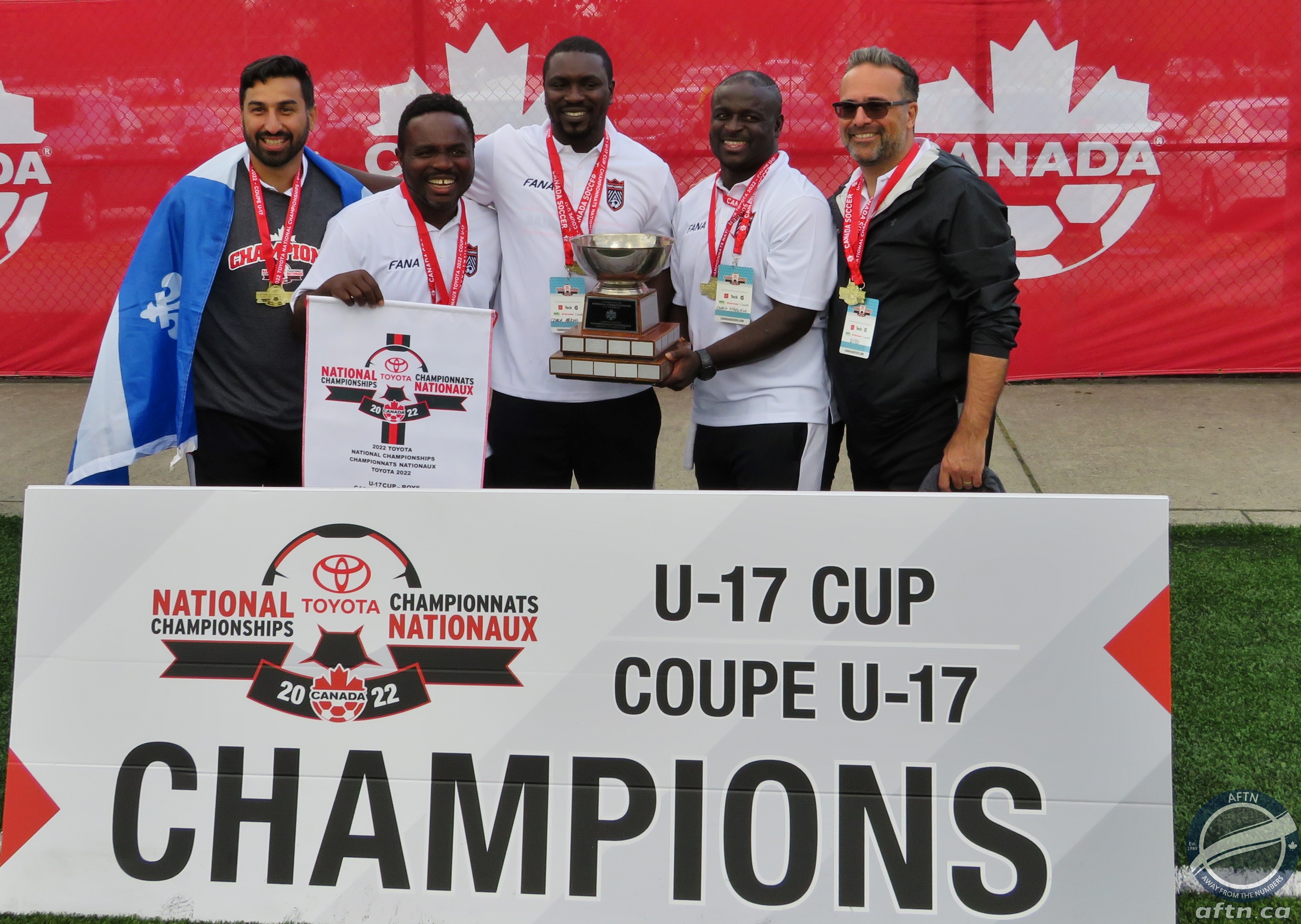