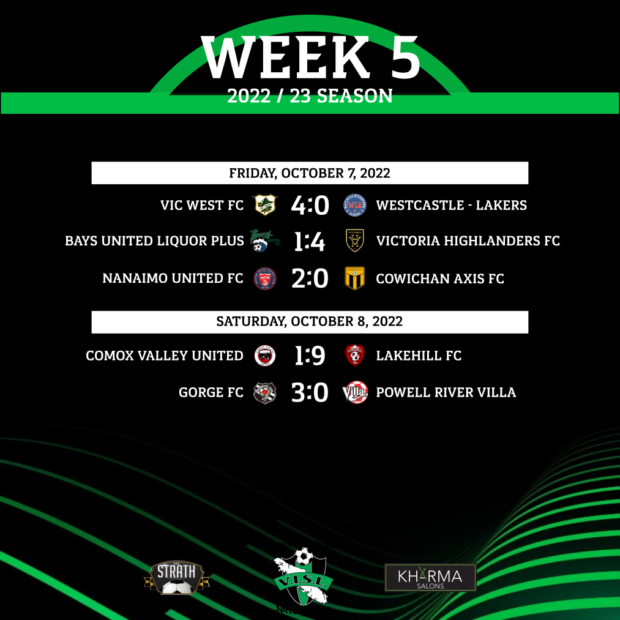 Week 5 of the Vancouver Island Soccer League (VISL) Division 1 has been completed over the Thanksgiving weekend. Some teams were thankful, others feasted, and some just wanted to get to the table.

Here is an overview of how things went in the island’s top flight.

Friday started out with Vic West flexing a little muscle, and shutting out Westcastle-Lakers 4-0 thanks to goals by Matteus Achadinha, Salem Almardy, and a pair from Kaelan Cooke. Earning the clean sheet and not letting Westcastle feast at all was goalkeeper Rafael Guerrero.

Friday also saw the Victoria Highlanders getting back to their winning ways by putting a fork in Bays United’s positive run with a 4-1 win over the Oak Bay lads. Highlander goals came from Samuel Viera, Elijah Bean, and a couple net ripplers by Arbnor Bytyqi.
Answering with the single serving for Bays was Adam Ravenhill.

Saturday got rolling at Vanier turf, and Lakehill absolutely went to the buffet table and earned a 9-1 victory over Comox Valley United. Comox had the first appetizer and Matthew Dooling found the back of the net first, but it was all Lakehill after that. Bryce Benton, Evan Libke, Tory Barbon, and Jack Hill all had goals, with Patrick Nelson hitting a pair, and Blair Sturrock bagging his first hattrick of the season in a dominant performance and a warning shot to the rest of the league of the power of the defending champions.

Saturday (and the weekend) wrapped up with Gorge blanking Powell River Villa 3-0 after goals by Max Schiller, Hussen Sayed, and Hatim El Zahari. Being a stingy host and not allowing the Villa squad to have a serving was goalkeeper Nick McCue.

So after all of that action, here is how the VISL Division 1 table is set after five weeks of competition: 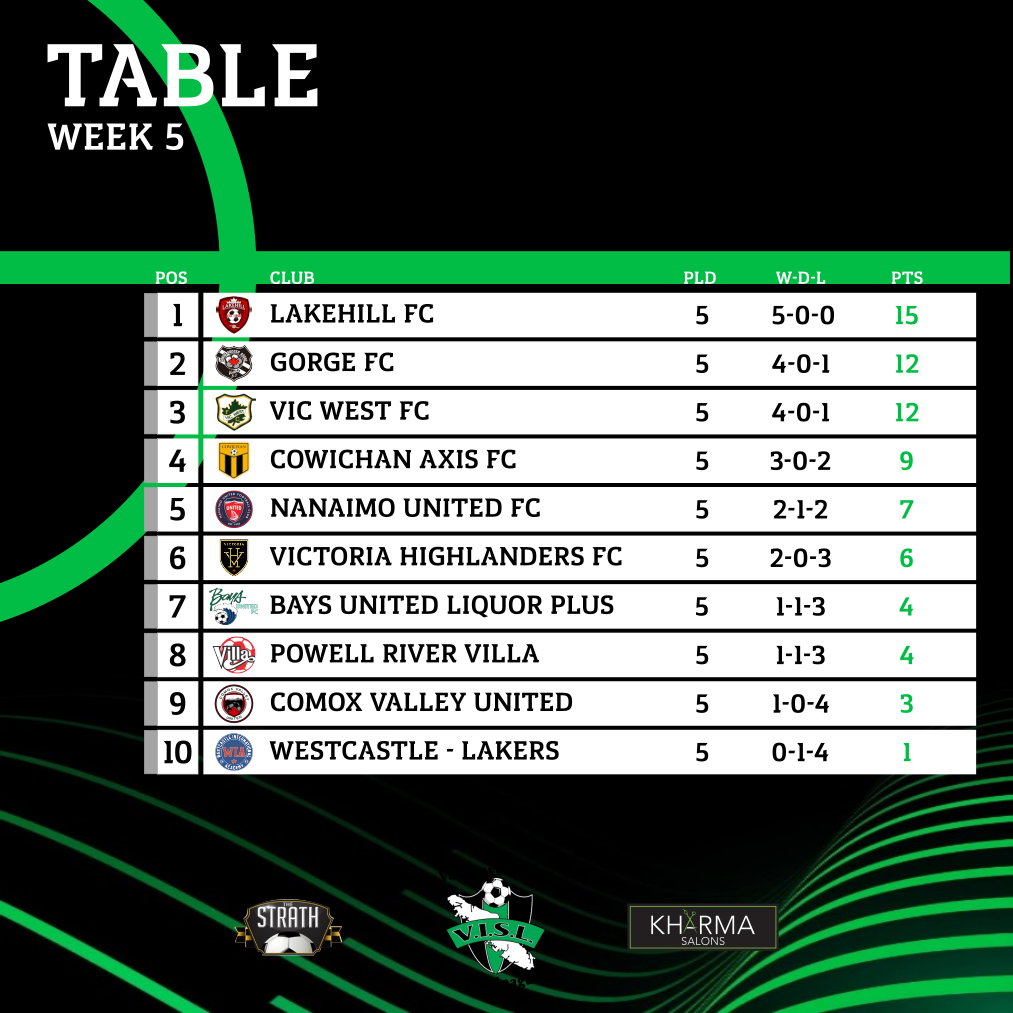 Lakehill continues to lead the division, remaining undefeated and perfect, with Vic West and Gorge closely behind.

It is early to talk about relegation, but Westcastle and Comox are in the zone to be dropped down to Division 2 next year and need to start finding some form soon.

In the clean sheets department, Hayato Matsuba still leads with two (and Gorge overall with three shutouts), and Geoff Hackett is welcomed back to the Golden Gloves table he usually has a seat at.

Goals were aplenty over the weekend, especially from Lakehill, so that leaderboard has a heavy red presence. One goal from Patrick Nelson is still being looked at as it may have been credited to him accidentally, but regardless, here is how that golden boot leaderboard is shaping up: 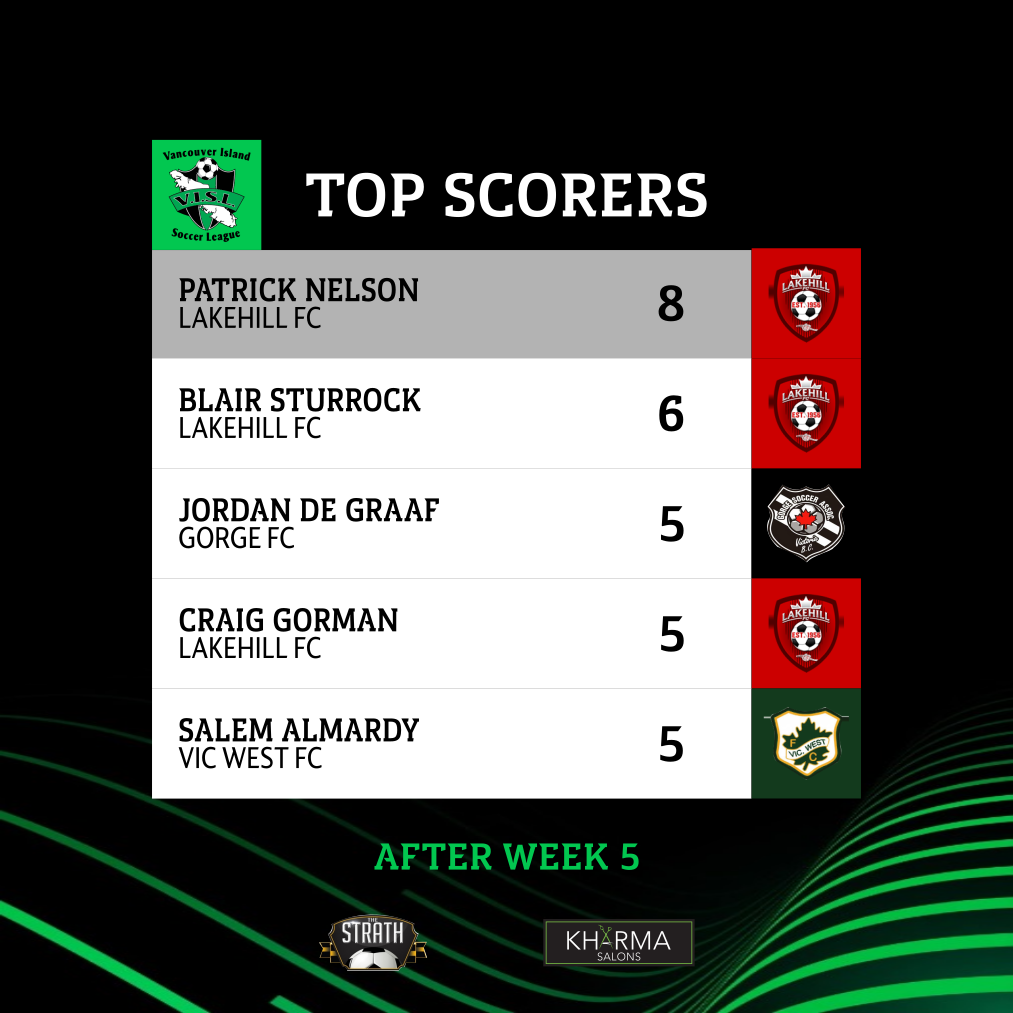 As we approach the thirdway mark of the regular season, there are plenty of games happening in the top flight of the Island Soccer League this coming weekend.

Our flagship division will get things going Friday night, and here is the lineup of games set up: 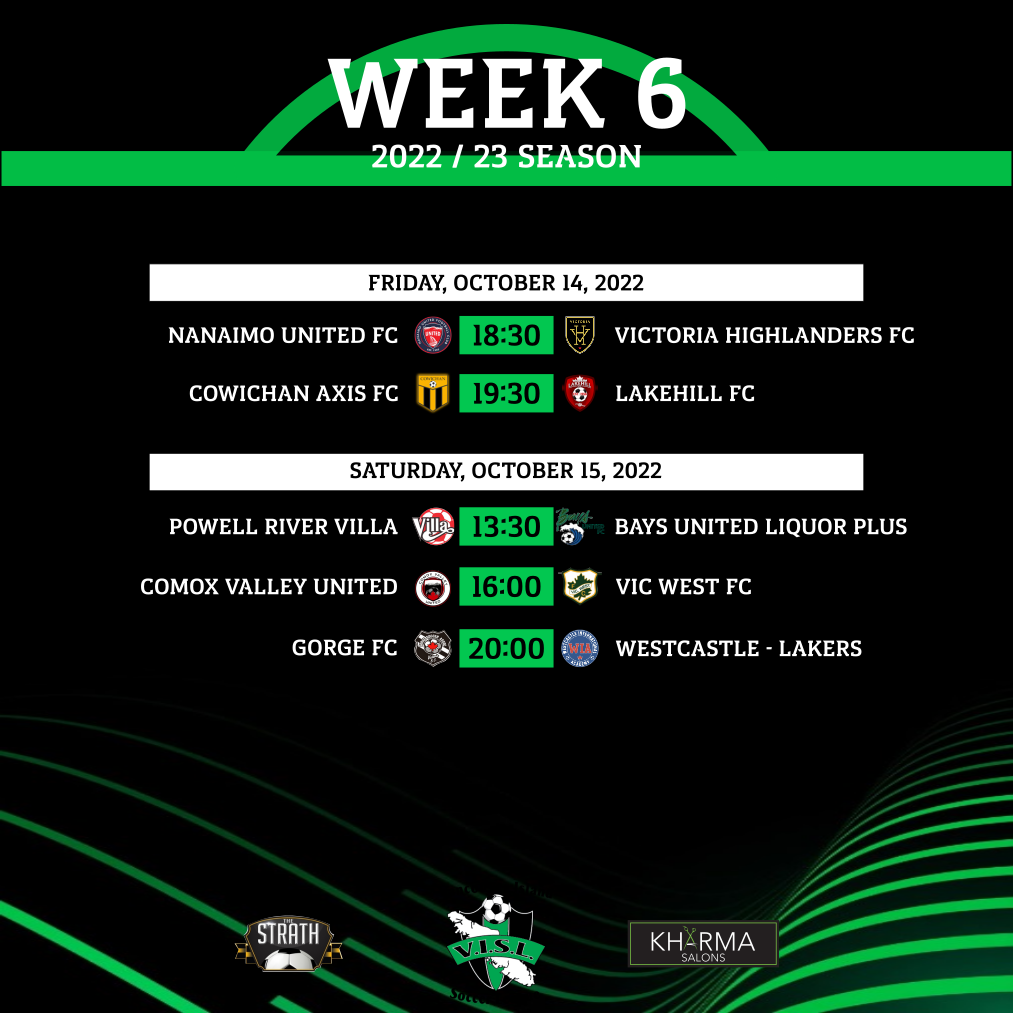 We are also happy to announce that the time has come to have the Celebration of Life for a long time member of the VISL, the School District, and the community overall.

David Ravenhill left us too soon, and is missed by his own family, his family at Reynolds Secondary, and his soccer family.

We are finally able to come together to celebrate and remember a great person. This Friday Oct 14 will be the date for the formal gathering at the Reynolds gym at 3:30 pm. On the field, a memorial game will take place between two teams that battle each other in the Masters division. UVic Alumni (where David spent many years playing) will host Cowichan 49ers for a battle of 1st place. Game time is 2:15 PM at UVic’s Centennial Stadium.

There is no doubt both venues will be busy as David was an absolute gem of a human being.

Thanks for supporting local grassroots soccer in your community, but thanks even more for supporting people in the community like David Ravenhill – a person that made everybody else’s life so much better.