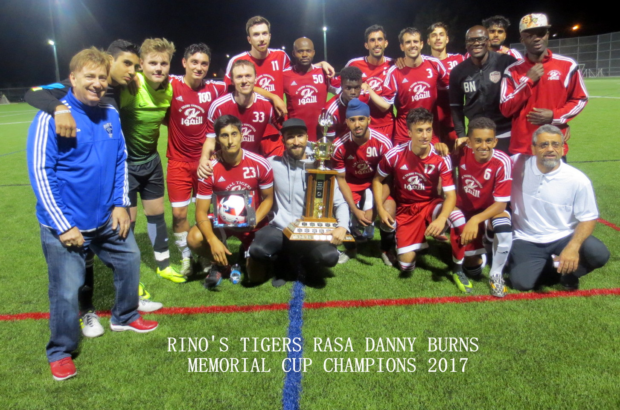 Another tough and highly competitive Richmond Summer League season has wrapped up, and if the playoffs looked to have some foregone conclusions heading in to them, the results on the pitch produced some great shocks along the way.

In the RASA Division One playoff semi-finals, Rino’s Tigers breezed past Binger’s Army by way of a 5-1 victory, while Delta Blaze were made to work a bit harder for their place in the final, edging Rino’s Originals 4-2.

That victory made it 13 wins in succession for the lads from Delta who headed into the Danny Burns Cup Final with a perfect league record and as favourites over the second seeded Tigers.

Rino’s Tigers however were the current Cup holders after last year’s championship win and with only one minute of play gone in the final the Tigers saw themselves ahead when Milan Gandesha blasted a low shot past Delta’s keeper, Alex Elsey. Delta Blaze seemed stunned at the early goal and that increased at the 20 minute mark as Dylan Dailly put Rino’s Tigers up 2-0.

The Blaze were not playing their usual game and the Tigers attack looked daunting. Fortunately for the Blaze, Elsey was on brilliant form and made some outstanding saves to keep them in the game. With only a few minutes to go till half time, Matteo Serka headed past the Tiger’s keeper to make the score 2-1 and set up an exciting second 45 minutes.

The Tigers continued their attacking form in the second half and restored their two goal advantage after only five minutes when Dailly scored on a breakaway. Delta came back again and Geoff Salt, winner of this year’s Golden Boot Award in Division One, closed the gap to 3-2.

However Rino’s Tigers kept coming and another breakaway saw Elsey make a brilliant save only to see the rebound go to Dailly, who the keeper subsequently brought down in the penalty area. Dailly got his hat trick on the ensuing penalty and the gap again was widened to two goals.

Salt would also score from a penalty, but Dailly added two more goals to cap off an incredible five goal performance that earned him MVP honours in the 6-3 victory for Rino’s Tigers, as they lifted back to back cups.

Division Two – The First Ever Sportstown Soccer Cup Is Awarded

A new trophy was provided to the RASA Summer League’s 2nd Division for the 2017 season, replacing the old Pumphouse Pub Trophy that had been in place since 1986. Sportstown Soccer Shop owner Craig Burnham lent his company’s name to the playoff competition for teams competing in the RASA Division Two Playoffs, and can be seen holding the new Sportstown Soccer Cup outside of his store located at Steveston Hwy & No. 5 Road in Richmond. 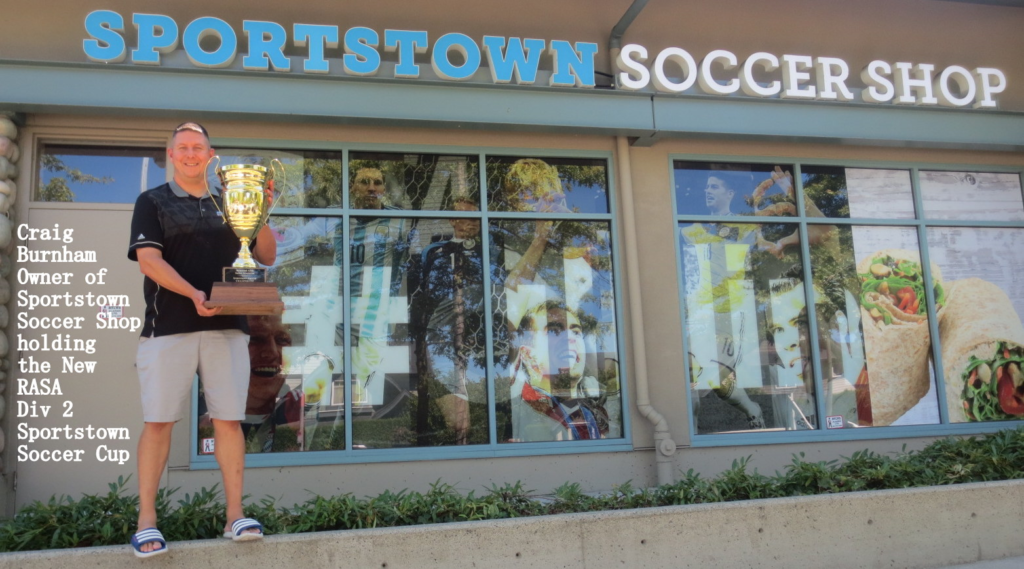 As the playoffs rolled on, two lower seeded teams, based on league play, surprised everyone when 6th placed Richmond Olympics beat second placed Richmond All Blacks 1-0 to carve their way to the Sportstown Soccer Cup Final. Meanwhile, Metropolitan FC, who were fourth in the league, shocked Division Two champions United Nations 2-1 in a close game in the other semi-final.

In the cup final it was Richmond FC Olympics who took control of the game early in the first half on a goal by Tim Sowerby. That was followed shortly by a run from midfield straight down the center by Mike Revell, who put Richmond up 2-0 before the half.

Metropolitan FC struggled with injuries in the second half and could not find the back of the Richmond net. When Trevor Tyrer scored Olympics third goal with only 20 minutes left to play in the match it was inevitable that Metropolitan would end as runners up, and when Mike Miller added Olympics fourth goal it was all over. 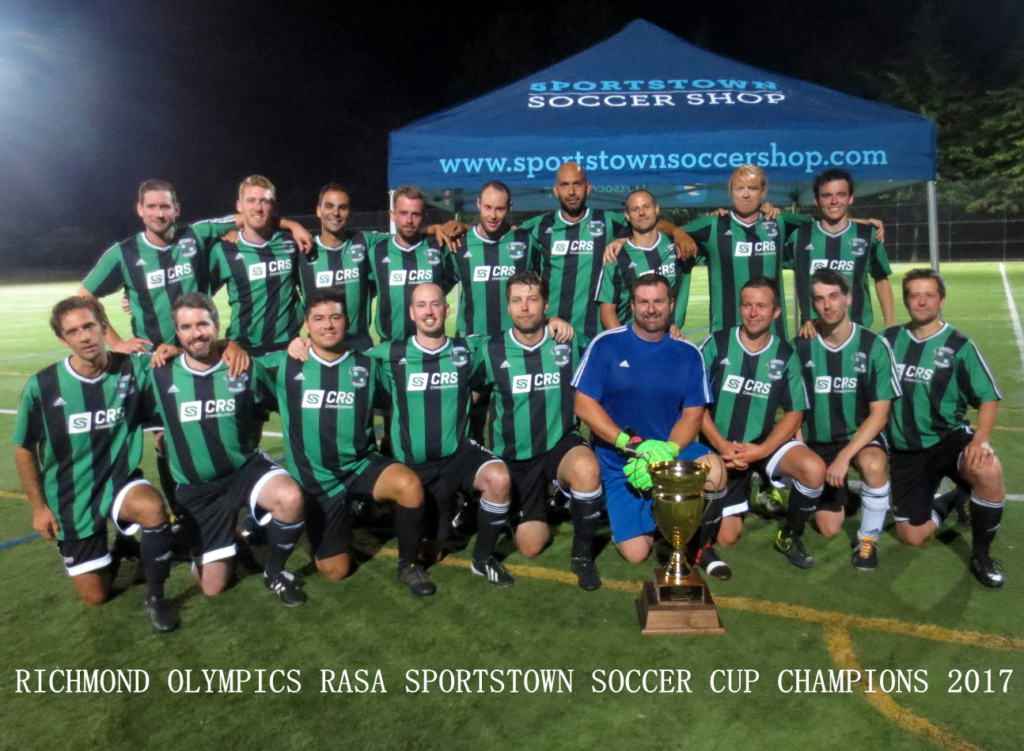 Richmond FC Olympics were last year’s Cup Champions and relinquished the old trophy in exchange for the new one. As consecutive cup winners they join the ranks of many teams that have had back-to-back success in cup play, but no team in either division has managed three consecutive cup victories. We will have to wait and see next year if either they or Rino’s Tigers in Division One can set the new record.