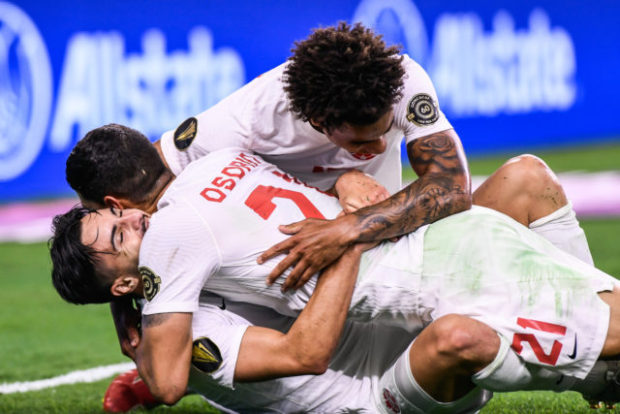 What a time it is to be a soccer fan in the Great White North. Canada came out 2-0 winners against a historical foe in Costa Rica this evening, gaining their first win against Los Ticos since 2007. They now move on to play Mexico in the Gold Cup semi-finals on Thursday.

The first chance of the game came in the 8th minute and it was for Costa Rica, with Johan Venegas’ shot being blocked by the man of the hour, Stephen Eustáquio. The next opportunity came for the Canadians when LAFC’s Mark Anthony Kaye’s strike was headed over the bar by the Costa Rican defence.

The first goal was always going to be crucial and it came for Canada 18 minutes in. A marvellous ball over the top from Eustáquio was finished off by Junior Hoilett, who ran in on goal and lobbed the on-rushing Esteban Alvarado in the Costa Rican goal.

Two minutes later and that lead was nearly doubled when Canadian captain Steven Vitória had a volley tipped over the crossbar, an impressive strike by the centre back. To end the first half, Kaye went for an acrobatic effort after receiving the ball from Richie Laryea that glanced just over the left upright and Canada headed into the break with a narrow one goal lead, but looking comfortable in all aspects of the game.

After a few chances from Joel Campbell, Hoilett, and Tajon Buchanan, Canada’s second came in the 68th minute when Eustáquio dutifully slotted home from eight yards.

Recent call-up Tesho Akindele finished the game with a few chances provided to him by Buchanan, but was unable to find the back of the net.

Today was a wonderful showing for Les Rouges, with some even going as far as to say that it was the best they have ever seen Canada play. There were great performances all around the pitch today. Starting with Eustáquio, aside from his goal and assist, Stephen was absolutely everywhere today. He seemed to never lose the ball or misplace a pass all match long. All credit to Herdman for convincing him that Canada was the best choice for him, as he is going to be a huge part of this time heading into the Octagon.

Next, are we sure Alphonso Davies is not playing in a Tajon Buchanan suit? The New England Revolution man was up and down the wing all night, sometimes missing that final pass but creating countless chances nonetheless. He reminds me greatly of seeing a young Davies in Vancouver; he never runs out of energy, and the ball just seems to stick to his feet as he creates chances out of nothing.

You would hope long time Cardiff City man Junior Hoilett finds a club after this competition, as he’s put in a few good shifts this tournament aside from the goal tonight. Other performances of note came from Eustáquio’s midfield partner Kaye, dynamic full back Laryea, and defensive locks Vitória and Kamal Miller, but honestly, it’s hard to fault a performance out there.

Our Canadians now move on to play an ever challenging foe in Mexico, who took care of business against Honduras 3-0 with goals from Monterrey’s Funes Mori, LA Galaxy’s Dos Santos, and Cruz Azul’s Pineda. A long time dominator in CONCACAF, Mexico is not a team that is fun to come up against. Although, much like the other teams in the Gold Cup, this is not their complete A team.

They are missing key pieces Hirving Lozano and Raúl Jiménez among others; however, they unfortunately have depth not really seen elsewhere in the region to fill their spots. Namely, Funes Mori has been banging them in all tournament long.

With long time midfield dictator Hector Herrera of Atletico Madrid as solid as ever, this will be a tough test; however, it is a challenge they’re ready to accept. Despite missing key players in David, Davies, Larin, and now Cavallini and Vitoria (through yellow card accumulation), Canada have been waiting to take their shot at the big boys in CONCACAF.

If our Qatar conquest is going to have any success, testing ourselves against the opposition is vital. We’ve had our few necessary tussles with the US these past couple years, and now it’s our time to put in a shift against the Mexicans. We’re on our way.

Regardless of the result on Thursday, it has to be said that this Canada team is blossoming. Its pool of youth and experience, with Herdman’s guidance, is producing some results on the field that would have been out of the question just a few years ago. Maybe we are actually on track to becoming one of the dominant forces in this region. Maybe Qatar is calling.

On if his young side is ‘coming of age:

“Step by step, I think that’s the key message. We’ve been focusing one game at a time. I think these 4 matches have been good, I think we’ve deserved to win all 4 matches that we’ve played in the tournament so far, and tonight I think they took a step by ensuring #1: we kept the clean sheet and #2: we just managed Costa Rica in a way that was important for this team to show #1: their tactical awareness and #2: that brotherhood which you’ve seen pressing Costa Rica for almost 70+ minutes. You know, that’s not an easy thing to build, the mentality to do that and as well as the bravery to commit that every man is going to be on the front foot. So, I was really happy tonight but as I keep saying we keep our feet on the ground, we take it game by game and get ready for the next part of the tournament…… that was a big step they took, and hopefully we can take another one”

“Well it took a good two years to bring Stephen over, and when you’ve played at Portugal under-21 level and you’ve played through all the levels in Portugal, you know you’re getting a good player. But what that young man was clear on was that he wanted to be part of the vision, he wanted to be part of something special, of changing something in Canada. He potentially could have stayed and found his way into that Portuguese national team, but as we discussed way back when, they’ve done pretty much everything in world football. They’ve achieved the lot, and Canada’s just on the start of a journey, so he has an opportunity to become part of a group of men that change the country forever. And that’s what motivates him, and you see it in his play. This guy, the intensity he plays at, the desire, the passion, I think he embodies everything we want this football country to be moving forward.”

On the strength of his defence:

“It’s one game at a time. We showed through the World Cup Qualifiers we could keep clean sheets, we’ve shifted our systems, we’ve become more adaptable, tonight we shifted our system again, so there’s a good tactical flexibility there. But if you’ve seen our games we defend from the front, and you’ve gotta credit the work rate of Junior Hoilett and Lucas Cavallini. I mean those guys are pushing hard. When we got our 2-0 win against the US we were on the front foot the whole night, it’s the style of play we’ve been implementing here for a 3 year period. But you’ve got to be adaptable, be smart and pick your moments particularly coming up against a team like Mexico. The next test is probably the toughest test of this tournament, the back four will be tested, the back five will be tested. It will be a tough night for those guys, but it’s what we want. We want these games. We said coming into this tournament we want Mexico, we want the US, Honduras, Jamaica, because we’re going to get them soon enough in a moment it’s going to matter even more to our country. Our eyes are here at the Gold Cup but there’s still, for me, one eye on what’s coming next.

On if Canada’s performance was almost perfect:

“We did good, but there’s another (tier?) to our team. We played today like it was the final, well guess what… we have another final! It’s against Mexico, and we’re going to do everything we can.”
When asked what has been the key to his and Kaye’s success in midfield: Brotherhood. I run for him, he runs for me. We run for each other, so it’s brotherhood.

On if this performance gives him belief that Canada can go all the way:

For sure. What I can say is that we showed today what Canada is, and we’re going to show it again next game.

On what this means for Canada:

It’s a good accomplishment. We’ve set out some big goals with what we wanted to do with this program after we brought a good group of players together. At the beginning of the tournament we knew that this was going to be an important game for us, and I’m glad that everyone came out on the field committed to the game plan, committed to each other, and played well. So it’s a good moment for us, and we’re on to the next one, preparing for the semi-finals against Mexico.

On if Mexico is a test he looks forward to:

100%. We have big goals, we want to get to the world cup, and to do that, you’ve got to play against big teams. We embrace every challenge and we’re excited to be in the semi-finals and to have an opportunity to play Mexico. That’s football, man. Every game you win, the next game is going to be another challenge. You have to embrace it, you can’t shy away from it. I back my brothers here and I’m excited for it.

On the team’s defensive performance so far:

I feel like every game it’s gotten better and better. We’ve finally got the clean sheet we’ve been dying for, we felt like we deserved one against the US…. Today, against a very good Costa Rica team, especially going up against Joel Campbell, we wanted to put together a complete performance and finally earn that clean sheet and that achievement that the back line and especially Max Crepeau totally deserves.

On Canada’s confidence on the field:

I think it has a lot to do with our relationship off the field. A lot of teams talk about being brothers and family but we all really enjoy each other’s company so much and it shows on the field. We’ll fight for each other, I feel like we’ll die for each other on the field. So, it’s a special special group, and I feel like it shows in the play. We have so many quality players, and especially coming off the bench, Tesho, Theo……such a solid group. Losing Phonzy early and Ayo and Cyle, we really want to show the country and all of CONCACAF that we’re a deep team and no matter who’s on the field we’ll get the job done.

On how he feels about being the underdog versus Mexico: