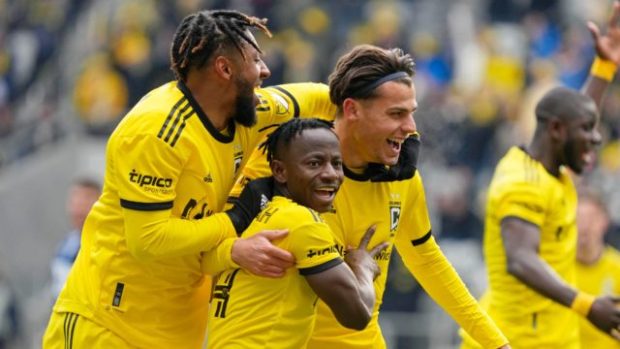 The MLS season is a marathon not a sprint. Good news for Vancouver Whitecaps, who fell heavily at the first hurdle in their season opener in Columbus on Saturday afternoon, going down to a 4-0 defeat and looking to have a lot of work to do to get anywhere near the level the team was playing at to finish last season.

First half goals from Miguel Berry and Derrick Etienne Jr had the home side coasting. Vancouver tried to come out fighting in the second, but Jake Nerwinski’s 53rd minute sending off made an already difficult task even harder. Late goals from Luis Diaz and Lucas Zelarayan made the final scoreline look very lopsided. Maybe not a full reflection of how the game played out, but not far off it.

Vanni Sartini has promised a lot of rotation over the season, making starting line-ups hard to predict. Even with that, this felt a less than optimal first XI of the season. Some of it was enforced, with Brian White out through injury, some of it precautionary, with Erik Godoy seemingly being used sparingly due to his injury history and Pedro Vite still finding his feet in the league.

Worryingly, there was very little to excite off the bench if the ‘Caps needed to chase the game, which they were soon having to do.

Columbus took the game to Vancouver from the get go, with the ‘Caps giving up a lot of possession and struggling to get out of their own half.

And the Crew found an early breakthrough eight minutes in when Miguel Berry’s shot hit off Veselinovic and nestled in the back of the net, past a scrambling Thomas Hasal, who was initially wrongfooted.

It was a tough goal to lose. Berry did well when he collected the pass from Zelarayan, turning Jake Nerwinski well to get off a shot, but it wasn’t on target until Nerwinski’s block directed it towards the Serbian, who knew very little about it.

Vancouver have shown under Sartini that their heads don’t go down and they have the ability to fight back, but they were struggling to get even a foothold in this one and soon found themselves two goals down and with a mountain to climb.

And it was another horrible goal to give up.

Yaw Yeboah sent an inch perfect diagonal ball to a wide open Etienne Jr in the box. The Haitian took a great first touch and easily buried it past Hasal to double the home side’s lead.

A great goal for Columbus but from Vancouver’s point of view, it was a shocker. Tristan Blackmon has been pulled into the middle, while Javain Brown tracked back at a glacial pace and was miles away from shutting Etienne down, allowing him all the space in the world. Under this wingback system, getting back quickly to defend is a must and it was severely lacking here.

THE TOUCH, THE GRIDDY @detienne_10

25 minutes gone, two goals down, no shots from the Whitecaps, and struggling to get in the game. It was a mountain the climb and it already felt like the size of Olympus Mons.

Columbus sensed blood and pushed for a third, but were only able to carve out some half chances and had a couple of efforts fly over, despite their pressure. That was at least a positive for Vancouver to take into half time, but with only two blocked shots to show for their offensive efforts it was hard to see how they could even start to turn this around.

Sartini tried to shake things up with the introduction of Sebastian Berhalter for Michael Baldisimo and full credit to the Whitecaps, who came out from the break strong and tried to get back into the match.

Seven minutes after the restart though and it was basically game over as the ‘Caps went down to 10 men when Nerwinski picked up a second yellow for contact on Yeboah as he powered forward. You can argue that it was a rough call to get sent off on, but for me it was a booking as the Ghanaian was clearly impeded as he streaked clear and I think he’d had have left Nerwinski in his wake and bore down on goal.

The Crew turned up the pressure and tried to turn the screw and Artur crashed a long ranger off the bar just past the hour mark.

The Whitecaps were actually playing better with ten men, but it proved too much for them to attack and hold on and two late goals completed their miserable afternoon.

Columbus finally put the game to bed in the 84th minute when Diaz finished at the back post to make it 3-0. Gyassi Zardes should have put the ball away, but took too long in front of goal after being played in by Etienne. Blackmon knocked it away, but it ran to Diaz, who finished with aplomb from a tight angle.

Three minutes later and it was four, with the goal of the game.

The ball came to Zelarayn in the box and the Argentine midfielder waltzed through the Whitecaps defence to fire home his team’s fourth.

A great individual goal, and a strong showing from the player throughout this one.

And that was all she wrote.

A deeply disappointing start to the season, with very few positives to take from it in all areas of the field.

Defensively, the team looked shaky with the personnel picked for the three at the back. There’s going to be rotation all season long there, but you couldn’t help but feel that two of the stronger options were kept on the bench. Hasal wasn’t given much of a chance with the goals, and the whole backline needs a lot more help from the wingbacks and midfielders.

The midfield was pretty impotent throughout, struggling to move the ball forward in the aggressive way that Sartini demanded. Part of that is down to how well Columbus played, but there are real concerns there. Hopefully Pedro Vite and Ciao Alexandre will help with that, along with Leo Owusu. All three were badly needed from the start against the Crew, but missing for various reasons.

Deiber Caicedo had some fleeting glimpses, but the attack did very little. Seven shots, none of them on target and three of them blocked. Lucas Cavallini once again did not play to his levels or those required from a DP striker.

The only real positives you could offer are that Vite and newly signed homegrown Emiliano Brienza got their first MLS minutes, but that’s scant plusses from a poor performance.

Food for thought and as Sartini said after the match, an early “wake up call” might be beneficial. There’s a lot of work ahead of him and the team. Whether the current personnel is sufficient to get them to the levels they need to be at to be competitive this season is certainly questionable on this showing.

It could be a long season.

“Yeah, the result speaks for itself and I think for one to analyze, it was a very bad start, very bad first 20-25 minutes and then we actually did much better the last 15 minutes of the first half until Jake (Nerwinski) has been sent off. We were doing well, we were back in the game. I think we were doing the things that we were supposed to do, and we were playing much better. Then after Jake has been sent off, of course it was really hard, so maybe 4-0 is too hard. We need to forget the result. Don’t forget the things that we have to do better, work on it and because next Saturday, there’s another top team coming to BC Place and we need to get a result there.”

“We were actually much better when we went into the first 20-25 minutes, that we played better because we started to do ‘Okay if option one is not available, we tried to play option two inside or to go along with the striker’ and actually Lucas [Cavallini] looked good winning a lot of the balls. I think also, when we were trying to press we were always one or two seconds late and it was too easy for them to to play over us and that was an issue, of course. You’ve seen the first half when they were playing 80% of the time in our half, because on that note, it looked like they were finding a lot of space in behind.”

On the team debuts of Blackmon, Berhalter, Brienza:

“I think they tried to be a contribution. I think that they did some things very well and some things we need to improve on. Like any other player, Emiliano [Brienza] made his debut as a professional, he never played before. And for the other guys, it’s not the start that maybe they dreamed of as Whitecaps but again, it’s a wake up call for them too and try to get better for the next game.”

“Tough game going in, it’s not the result we wanted. Number one, we’re out there to compete and win the game, obviously it didn’t go the way we wanted, just disappointing. You know, to have a red card […], it’s just disappointing to not come up with a result especially in the first game.”

On settling in with his new team:

“I felt good, the guys are great and they all have been super welcoming, Vanni too, it makes it really clear and straightforward. I did feel comfortable but it’s unfortunate how the game went, but it felt good to get out there and it felt good to wear a Whitecaps shirt for sure.”

On playing at BC place for the first time next week:

“I’m really excited. I can’t wait to be in front of all the supporters for the first time. It’ll be great to be able to play in that stadium. I think, not only for myself but we’re all really excited, and hopefully can go out there and get a win.”