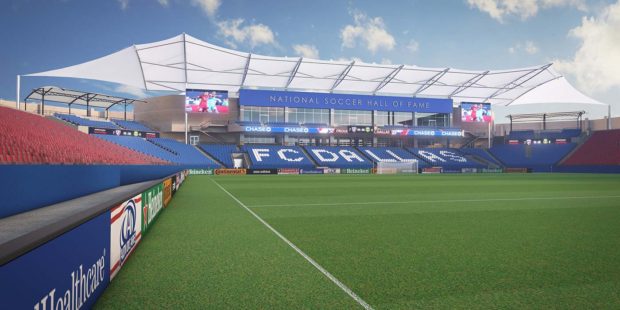 Vancouver Whitecaps had never taken a point in Frisco against FC Dallas, never mind getting the win, and heading into Saturday night’s encounter in temperatures that felt like 47 degrees, with squad rotation, and coming off the back of a disappointing loss to Portland last week, hopes weren’t high of that changing any time soon.

So just what the hell happened? Can the ‘Caps bottle it? Did Dallas bottle it? Is this the real life or is this fantasy? Whatever it was, I like it!

The ‘Caps put in a performance for the ages, so far removed from whatever that was last Sunday against the Timbers, to shock the home side with a 4-0 victory and see the biggest Dallas implosion since the days of Sue Ellen.

Bernie Ibini set the ‘Caps on their way in the first half, before a Fredy Montero brace and a stunning Nicolas Mezquida bicycle kick in the second secured a victory for Vancouver over a Dallas team that played the last 31 minutes with ten men after Carlos Gruezo’s straight red card for an elbow to the face of Reyna.

Add in a clean sheet for David Ousted and this was a night they’ll be talking about for a long time to come.

Carl Robinson rang the changes he hinted at during the week, with Yordy Reyna getting his first start, and Ibini, Brek Shea, Marcel de Jong, and Sheanon Williams also all coming in. If the changes made fans feel this was being treated as a throwaway game, the performance spoke otherwise, with Robbo now left with a very nice headache when it comes to his team selection moving forward.

The teams started the match fairly evenly, with both winning early corners, but the ‘Caps opener had an element of good fortune about it when Ibini cut inside in the 18th minute, made room for himself, and fired a low one towards Jesse Gonzalez, taking a slight deflection off Victor Ulloa on the way to redirect the ball just past the outstretched arms of the Dallas keeper.

Not a picture perfect goal, but they all count. and the Aussie was off the mark in MLS.

That's why you shoot.

Dallas pushed hard for the equaliser and they thought they had it five minutes before the break when Roland Lamah got the better of Williams and tucked the ball past Ousted but was deemed offside.

Mauro Diaz had a low shot saved by Ousted as the home side pushed but Vancouver held firm and headed in at half time with an unlikely lead.

The question now was would the ‘Caps be happy to sit back and defend their lead or go with the best form of defence is to attack approach? Thankfully it was the latter and the Whitecaps doubled their lead three minutes after the restart from the spot.

Montero was barged down by Kellyn Acosta, in a challenge that didn’t look much on first view, but was clearer on watching it back. Referee Baldomero Toledo had no doubts though, pointing straight to the spot, and Montero picked himself up to first home his 7th of the season.

You still had an uneasy feeling about things, even when they nearly made it three soon after, but those feelings did start to ease in the 59th minute when Gruezo saw a red mist and a red card descend when he elbowed Reyna on the deck.

Two goals and a man up, there was surely no looking back for Vancouver now and so it came to pass.

Montero grabbed his second, and the ‘Caps third, in the 67th minute, with a lovely finish off a nutmeg assist from Tony Tchani.

To their credit, the ten men of Dallas kept pushing and the ‘Caps were happy to see a fierce Acosta strike crash off the left post in the 77th minute. But they were even happier six minutes later when they added a fourth with the goal of the game.

Williams took a quick throw in to Mezquida, who let it bounce, took a touch on his chest, and hit a spectacular bicycle kick pass Gonzalez from the tightest of angles at the near post.

4-0. What an unbelievable night!

It was the end of the scoring, and as a historic night came to a close, the Whitecaps came away with their biggest ever away win in the MLS era. The perfect reaction to last week’s disappointing defeat, although it did leave you questioning just why they couldn’t produce such a passioned performance in a home Cascadia derby match.

But onwards and upwards, the next two away trips to Colorado and New England now seem a lot less daunting, and with the wins catapulting the ‘Caps into 4th in the West and just four points off first place, there’s a spring in everyone’s steps in Whitecapsland.

What a difference a week makes.

“A positive result for us. We played really well in the game, which you have to do when you come here. It’s the first points we’ve taken here at Dallas, we know how difficult a place it is to come. With Timmy (Parker) and then Kendall (Watson) coming back from Costa Rican duty was really important for us. We know they’re really good at certain things and you’re going to have to defend crosses and counterattacks when you play against Dallas because they are arguably one of the best teams at doing that when the game gets spread, so those two players as well as every other player on the field deserve a lot of credit.”

On the penalty call…

“It’s hard to see from where I am, and I’m not sitting on the fence because I never do that. Some are given, some are not. We took advantage of it today. I’m sure Oscar (Pareja) will be disappointed, but we’ve missed a few penalties (laughs). I did have a little wobble up, as well, so fair play to Fredy (Montero).”

“I broke the game down into segments today. If you give an early goal away to Dallas because of they way they play and the personnel they have, it’s very difficult if they get a goal ahead because of their counterattacking. So we broke it down and got our noses in front which was important. After we scored we sat back a little to much which I addressed at halftime, and full credit to them coming out in the second half and showed confidence and poise. When (Dallas) went down to 10 men we had a little bit of luck, but some of the football was great today and enjoyable to watch.”

On the performance of Fredy Montero…

“Great. Led the team properly and gets the penalty, and the second goal was a great little finish which I’ll expect him to do. He’s missed a couple of chances, but he full of confidence at the moment because he works hard in training. If you work hard in training every day then it transfer into games, and fortunately enough for today, it transferred into the game.”

“We’re happy. We got the opportunity to make history with the team. First game for Vancouver Whitecaps to win in Dallas and we’re super happy. We did a good job. Our wingers were playing very good, attacked, and came back to defend which was the key to the game.”

On what contributed to his two goal performance…

“We played a 4-4-2, sometimes we played 4-4-1-1 which gave us more space because the wingers, Bernie (Ibini-Isei) and Brek (Shea) were doing really good job creating width today.”

On taking the penalty kick…

“I got the opportunity because the coach said so. My name was on the board to take the PK. I’m feeling confident and willing to help the team any way that I can.”

“We had to make a statement after our previous match versus Portland at home. We have a couple tough games on the road coming, and we had to start well here. Given the heat and circumstances, as a team, we really buckled down. We gave away some chances that we shouldn’t have in certain areas of the field, but overall I thought we performed great.”

On the effect of the weather…

“It was very, very warm. We managed the game very well and I think we played the conditions very well and that’s what made us get the result.”

On his first MLS goal…

“I’m very happy. It’s great to get the first goal out of the way because the first one is a bit harder to get, and you’re a bit anxious to get it, so I’m very happy to get off the mark now.”