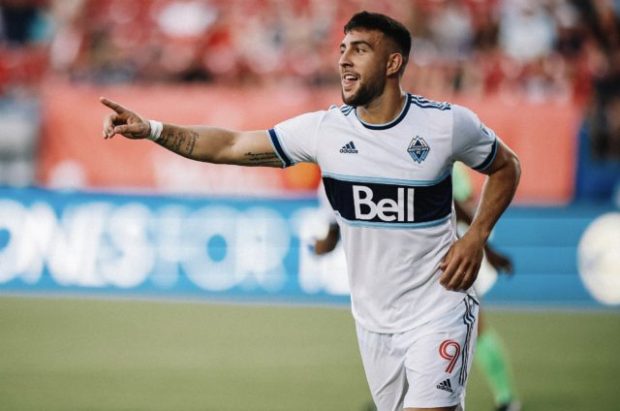 What a difference four days makes. Vancouver Whitecaps headed into the Dallas heat on Saturday night and looked unrecognisable from the side that simply didn’t turn up in Seattle midweek, coming away with a big 2-0 win after goals at the start and the end of the first half from Lucas Cavallini and Deiber Caicedo.

Sartini made seven changes from the side that went down with a whimper against the Sounders on Tuesday night, looking for some freshness and some fire. He got it in droves.

Sartini had been critical of his side’s sluggish start in Seattle. He had no complaints in this one as the Whitecaps went from Sleepy in Seattle to Deadly in Dallas as Cavallini fired them into the lead with just 100 seconds on the clock.

The goal came from a quick break forward with the Colombian connection of Caicedo and Cristian Dajome linking up well, allowing the latter to send a low cross into the box, which took a fortunate bounce off Facundo Quignon into the path of Cavallini, whose shot then got another fortunate bounce off Dallas keeper Maarten Paes’ arm and flew high into the net.

An ugly goal but Vancouver cared not a jot.

Andres Cubas nearly made it two for Vancouver in the 12th with a long range bullet that crashed off the right post.

In contrast the home side were offering very little in return and Cody Cropper was having an easy night at the office in the ‘Caps goal.

The Whitecaps were playing the better football and looking a much different and more dangerous proposition from midweek and they got their reward a minute before half time when Caicedo curled a lovely 20 yard free kick around the wall and past an outstretched Paes.

Going in to half time with “the most dangerous lead in football” was going to pose the ‘Caps a dilemma as to how they would approach the second. If Dallas got the next goal it was going to feel like such a different game.

Vancouver went for the defence first approach, basically dropping out of the game as an attacking threat. Dallas weren’t much better and only had a Franco Jara header that went over and a later shot that did the same to show for their efforts.

The game just seemed to fizzle out and the Whitecaps comfortably saw it out to claim what could be three huge away points in the grand scheme of things, moving up to 8th in the standings, level on points with Seattle who currently hold the 7th and final playoff place in the West.

The perfect build up really for Wednesday night’s big Canadian Championship semi-final at BC Place against York United.

“Yeah it was huge. I think the guys stepped up in terms of concentration, in terms of approach. Let’s say the proof of that is that we scored after like 90 seconds or something. We were concentrated the entire game. We played much better than them in the first half and in the second half, they pushed us a little. Also with that heat, it was hard to keep playing and keep pushing forward, but of course they were down. They were pushing us but we defended very well. So it’s a clear victory, it’s against a very good team. So yeah, top result away.

On how much Wednesday’s match means:

“It’s means a lot as you said, Wednesday, it’s the biggest game of the season so far because we have the great chance to go to the final of the Canadian Championship so everyone who looks here and thinks that the next game is on Saturday, no the next game is on Wednesday, we’ll play at BC Place and we need the support of everyone, we need BC Place to be packed, because we need to, let’s say not only as having the confidence but getting the confidence from our fans. They’re fantastic, so we are going to that game in a very good place mentally, physically, and technically. We were able to rest some players today. so we’ll have a lot of players that are one hundred percent on Wednesday, so we’ll go with our full guns trying to go to the final.”

On his first start with the team:

“Yes, it felt very good, very good. A couple days ago, down in Seattle, I got to know the league as a substitute and today I got a start. Overall, just getting to know my teammates, getting to know the system. This result is a big one for us. It gives us a lot of motivation to keep going and it’s a big three points.”

On playing at BC Place for the first time next week:

“I can’t wait. I’m super anxious to play there, to play with our people, to play in our home stadium. To be honest, it gives me a lot of joy. If the chance comes, I’ll be there and do my best for the team. Keep building forward, we got a good team here and we’re on the right path.”

On starting the match:

“It felt great to be honest. It’s been a long time coming, it feels like it’s been only two months but it felt like an eternity to me because I love being out there with the boys. But yeah, it’s great to get to start finally again. The biggest thing is getting the result away, which is huge.”

On the team atmosphere:

“Obviously it’s great. We just got a big win away, I think that creates a good environment and good vibes around the team. Like you said, going into this big matchup this week, we’re all looking forward to the challenge, have a few days and then we’re back at it so I’m looking forward to it.”

General thoughts on the match:

“Mentally we weren’t enough, and we weren’t ready. The first half wasn’t good enough, and our standards are higher than what was shown. This is on me and something we need to change this week. What we can do now is learn from this and improve.”

How Vancouver’s way of playing might have interfered with Dallas’ play:

“We did better in the second half and were more direct. They (Vancouver) made it very difficult because they close the field very well and then for us, we don’t have connections inside, so we go through lines to break the opponent’s defensive shape. We had thirty-three crosses today so that we could have chances to score goals but we had fewer chances to score. If we score the first goal, the game can change completely because we’ll be on top of the other team.”

On going down early:

“When you go down early to a team like that and not respond the way we did in the first half, we played like crap – all 11 of us. It is frustrating to come back from a break and play like that, we gotta bounce back.”

On the team being unfortunate:

“In the field we had all the energy and tried to protect ourselves and play to the limit. It happened a lot to us last year. There were sequences where it felt like each player would try something individually and it wouldn’t work. Once we would connect, the game would change for the better for us. We committed mistakes today and they took advantage of that. There have been times where we have been lucky and took advantage of those scenarios.”

“This locker room is pretty upset. We knew that this was an important game, especially at home in front of our fans. And usually when we play at home we want to give it our all and take three points.”

On what the team can take from this game into the Austin FC match next week:

“I think we played with a lot of energy in the end. Obviously, tonight wasn’t our night. I think there are just a lot of things that we can get better at. Collectively, it’s a tough loss and a loss that we’ll be able to learn from and hopefully use this experience that we had going forward, especially for home games.

On playing 90 minutes after returning from international duty:

“Yeah, my legs were okay. In the end, obviously, you’re exhausted but those are the games that you definitely don’t want to get out of. I’m glad that we kind of hung in there, Jesús (Ferreira) and I in that game. In the end I think it was tough. It’s a really, really tough result for us and a poor performance overall.”