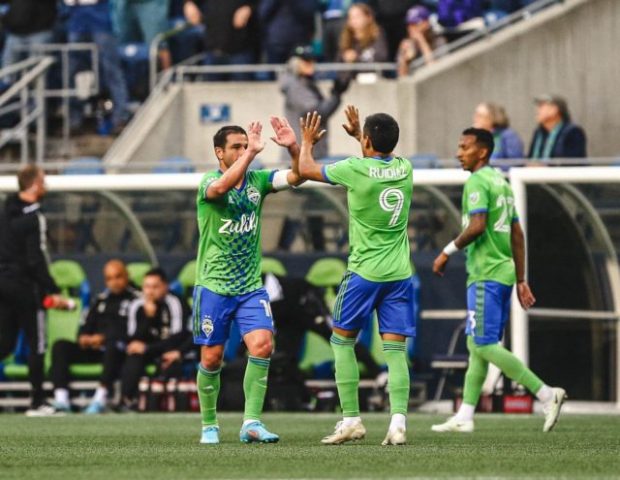 Seattle hasn’t been a happy hunting ground for Vancouver Whitecaps for quite some while. In fact games against the Sounders have not been productive for the ‘Caps in general. Vancouver haven’t beaten their Cascadian rivals since 2017 and they extended that winless run to 15 games after going down to a 4-0 road loss in Seattle on Tuesday evening.

And it was the old foes of Nicolas Lodeiro and Raul Ruidiaz that did the bulk of the damage once again, grabbing three goals between as the Sounders ran out very comfortable victors in the rearranged match. Alex Roldan grabbed a late fourth to put the icing on a very tasty Cascadian Cup cake.

The Whitecaps recent form had seen them as the second best side in the league over the last six matches, but they couldn’t get anything going in this one and failed to manage even a single shot on target over the 90 minutes.

It all started to go wrong early for the ‘Caps. Cody Cropper stopped a Fredy Montero shot in the 4th minute after Seattle broke quickly following some confusion between Ranko Veselinovic and Florian Jungwirth. The rebound came back to Montero, who took the ball past the keeper and didn’t need an invitation to go down when he was caught by Cropper’s trailing leg for a penalty.

Up stepped Lodeiro, who blasted the spot kick home, and Seattle had the early lead.

Neither side really stamped their authority on the game, but when the Sounders doubled their lead in the 28th minute, it pretty much already felt like game over.

It was a lovely passing moving by Seattle, who prised open the Vancouver defence, allowing the ball to come to a wide open Ruidiaz in front of goal, and the Peruvian buried the bouncing ball without being under any pressure from a ‘Caps player.

The Whitecaps enjoyed some decent possession to close out the half without really threatening to reduce the deficit, and had a tough job ahead to try and get back into this one.

That job almost became mission impossible six minutes after the restart when Lodeiro crashed a beautiful 25 yard curler off the bar, with Cropper beaten all ends up.

A sigh of relief for the Whitecaps but it was to be a brief respite as the Sounders did go three ahead just three minutes later.

It was another goal that came from the quick movement of Seattle who switched the ball from wing to wing, allowing Leo Chu to send a dangerous ball into the box that got past two Whitecaps, allowing Ruidiaz to glide in and tuck away his second of the game from close range.

Ruidiaz nearly had his first ever career hat-trick in the 62nd minute when Seattle powered forward after an Andres Cubas giveaway but Veselinovic got back quickly to clear his goalbound effort off the line.

It was pretty much Cubas’ first touch after coming on as a sub, but at least it was good to finally see the Paraguyan on the pitch in a Whitecaps jersey.

The rest of the match played out without too much to trouble Seattle’s lead and the Sounders in fact added to their tally in the 89th minute when Roldan fired home with a shot that Cropper should have really done better with.

Seattle’s comfortable 4-0 win not only secured the three points, but saw them move into the playoff places for the first time this season.

For Vancouver, it was another disappointing night at the office at the home of their Cascadian rivals, but they’re still very much in the playoff picture, just two points behind the line and finding a way to get wins and points on the board.

They’ll need to move on quickly from this one as they have a tough trip to Dallas coming up on Saturday. But with players getting back healthy, hopefully they build on the previous results and just put this game out of their minds.

“I think it was 100 per cent not our game. Everything that could have gone wrong went wrong, it’s our fault, mainly. The main thing that remains our fault is the way that we started the game. Not intense enough, I will say not locked in enough to do what we’re supposed to do. The way that we conceded the first goal, we were three against one and then we stopped, thinking that the referee whistled then actually the referee didn’t whistle anything. So I think it’s a good reminder that if we’re not performing at the top of our skills, we’re going to lose against every team. That’s the thing. When we do it like we did in the last games, totally focused on the task, it’s hard for everyone to beat us. It’s hard even to comment, because then after that, some moments we played a little well, but there was always this sensation that today was a game that we almost lost from the beginning. I don’t know what to say.”

“I think it was very good to have him. I think he’s probably the most important thing of the day, his debut and the fact that Tristan [Blackmon] got back after two months, so we were able to give them minutes and to make them even more ready for the next game. He had to adapt. He made the mistake immediately, almost causing the goal when Ranko saved the ball on the line, because he lost the ball. But then he played two, three good balls. He showed his characteristics, very aggressive, even over aggressive because he came on in a very difficult game. So I’m happy that he had this 30 minutes, to get him with the team and to start being a part of the squad and ready to help from the next game.”

“I think we lacked a lot of intensity throughout the whole game. I’d say that was one of our major problems. When you come to a place, to lose a penalty in the first couple of minutes and chase the game, we’re just making things tough on ourselves and it’s just one of those nights that you want to forget, but we’re going to need to look back at that, see what we’ve done wrong, and make sure that in Dallas on Saturday, we’re in a much better place, much more intense, and much more aggressive. We can’t repeat that performance.”

On this Cascadia rivalry matchup:

“It’s tough, I don’t know if I can put my finger on top of it right now, straight out of the game. Just the frustrating thing is that they looked much better than us, that can’t be allowed to happen. We didn’t really have any responses for really breaking them down or stopping them playing so there’s not an awful lot I can say no. We’re all just frustrated.”

“Yeah it was a frustrating one. I mean I think right from the start we didn’t look at it. When you’re away here it’s always tough. I mean, in the first half, they got two chances, they scored both. The second half I think once we conceded the third we just fell apart. It was a tough game, it was a learning experience for us.”

On his overall performance:

“I feel like I can always do better, when you lose a game 4-0, I really don’t think anyone plays that well. So I definitely could have improved. But I feel like personally, I think it’s growing confidence, I feel better with the ball with more confidence. I feel from that aspect that I’m growing, but I feel like I can still improve defensively and help the team out when I’m there.”