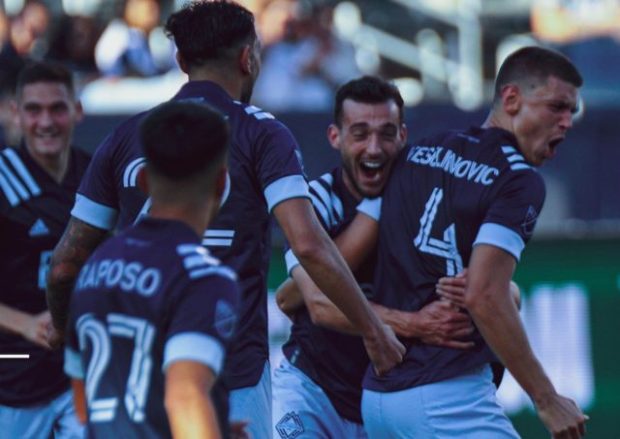 At some stage Vancouver Whitecaps need to turn their draws into wins. The ‘Caps recorded their seventh draw of the season on Sunday evening, a 1-1 tie at the LA Galaxy, but after a poor first half performance and hit by a number of key absences, this was a point very much won.

The ‘Caps began a three game road stretch by battling back after trailing to a 32nd minute Kevin Cabral strike that was the result of some sloppy defensive play. They looked like a team that had no way back, but came out for the second half like a completely different side, levelling things up through a Ranko Veselinovic header five minutes after the restart.

Neither side could find the winning goal and the Whitecaps will come away from this one relatively pleased and with a lot of hope heading into their next Californian encounter in San Jose on Friday, which is as close to a must win match as you get in August.

The Cristians of Gutierrez and Dajome out injured, and Michael Baldisimo out through yellow card accumulation, Marc Dos Santos was forced into changes. Maxime Crepeau and Lucas Cavallini came back into the team after their time away with Canada at the Gold Cup, with Jake Nerwinski moving into the left back role and Javain Brown coming back in at right back.

Patrick Metcalfe was given the start in midfield, while Brian White moved out to the more unfamiliar right wing role.

It wasn’t an exciting start from either side. There were a few chances created, a few goalkeeping scrambles, but very little of note in a sluggish start.

The Galaxy were looking the more dangerous and likely to break the deadlock, and Samuel Grandsir should have done that, curling one over from a great position with just Crepeau to beat.

It felt like just a matter of time before the Galaxy would find the back of the net and it came in the 32nd minute when Cabral was left with acres of space in the box when he collected a pass and easily fired past Crepeau.

It was horrible defending from the Whitecaps, and with very little spark at the other end of the pitch, this was already feeling like a long way back for Vancouver.

HE EARNED IT 👏@KvinCabral puts us ahead after a lovely build-up from midfield pic.twitter.com/iMT7zsdIej

They nearly got back into it though with basically the last kick off the half when Cavallini, who was nursing a knee knock, missed by inches with a spectacular overhead kick.

So heading in just one down at the half was certainly not as bad as it could have been for a Vancouver side that had been outplayed, outpossessed, and outshot, but they very much looked the second best side out there. Could they conjure up some of the halftime magic that’s seen them look a different team after the break?

The answer was a resounding yes.

Cavallini’s knee injury saw him replaced at half time by Ryan Raposo, with Russell Teibert coming on for Caio Alexandre. The pair gave the ‘Caps a new lease of life and they took the game to LA to start the second half.

And that pressure paid off five minutes in when Veselinovic grabbed his first goal as a Whitecap, heading home a Deiber Caicedo cross from a corner.

Ranko 🇷🇸 has his first @MLS goal and we have ourselves a ballgame!#VWFC #LAvVAN pic.twitter.com/6IsrFMulSj

The Whitecaps continued to be the better side, without carving out any clear cut chances to go ahead. The Galaxy slowly found their second wind and got back into the game, forcing a couple of strong saves from Crepeau.

The Whitecaps brought on their new Designated Player Ryan Gauld with 13 minutes remaining and without trying to build up the new addition too much too soon, it was clear in those minutes what the Scot will mean to this team when he’s up to full match fitness.

Gauld had a number of chances in the closing minutes, some created by himself, and brought out a sprawling save from LA keeper Jonathan Bond with a late dipping effort, but there were to be no more goals and the points were shared.

The draw keeps Vancouver at the bottom of the Western Conference standings as we reach the midway point of the season, seven points behind Portland and LAFC in the last two playoff places. It will be a tall order for the Whitecaps to make the postseason, with those teams immediately above them starting to pick up points on a regular basis.

Not an impossible task though with nine of their last 15 matches finally coming at home. Before that there’s trips to San Jose and Austin coming up. Two wins from those and Vancouver are very much back in it. Every point dropped though will prove very costly.

On second half adjustments:

“We weren’t able to press them well. We tried to be a little bit more aggressive but the way they came out with three players all the time, we felt that we were late to everything. They were overloading one side, they were making it very hard on us on one side with the ball movement… At halftime we adjusted tactically. We went with Déiber [Caicedo] and Brian White together and they initiated the pressure, they were more aggressive, we were able to push the lines higher.”

On playing on the road:

“If you look at our results on the road, I don’t think that’s a problem when you’re in the MLS. Many teams would like to go on the road and get the results that we’re getting in very difficult places. But the problem is we don’t play at home, and we haven’t played at home for so long. We have to go win on the road, and that’s not easy to do. But every point matters. Now it’s five games undefeated, and all those playing away, and every point puts us in a position to grow and to get better.”

“We said 15 minutes, and that was the plan. He came on in the 75th minute and when he came on he brought what I think he’s going to bring with consistency. We had a very good chance — I wouldn’t call it a chance — he made it a chance a little bit out of nothing, with the quality of his shot, [forcing] a very good save. He was so close to getting to the end of one. But now we have a deeper bench, now we have a lot of options and that helps keep the team healthy, that helps keep the team sharp.”

On competition among midfielders:

“We have a big problem in the midfield, a lot of good players are competing for three spots. You have Pat [Metcalfe], Leo [Owusu], Rusty [Teibert], Caio [Alexandre], [Janio] Bikel, Baldy [Michael Baldisimo], and Ryan Gauld. It’s seven good players competing for three spots, and sometimes I leave [out] guys that are doing well, but the other ones playing are also in a good moment. If I find a way to play seven midfielders I’ll think about it, but it’s very hard. The guys are all ready to go, ready to help the team, and that’s the important thing.”

On his first MLS goal:

“I need to see it. I just saw it on the game. It was a perfect cross from Deiber and I just managed to flick the ball into the net before Bond. It’s a good goal, I’m happy about it. My first in MLS, I hope there is going to be more.”

“It was a good match from both sides. LA Galaxy played better first half, we play better second half. We had a few chances maybe to take all three points. I’m disappointed that we couldn’t manage to do it, but every game is hard in MLS, especially when we play a lot of games on the road. We need to focus, now we have a game in five days in San Jose. So, one point is better than zero points. We didn’t make all three, but we need to focus on the next game.”

On making his debut:

“Good to finally get on the pitch, a bit tiring, but the most important thing was that we managed a decent result. In the end, we created enough chances to win it. But after going behind, we’ll take the draw.”

On his first MLS experience:

“It was a great experience. It was my first time being here at this stadium, and very impressed with them in the first half. And then we looked a much better team in the second half. I already knew there’s a lot of quality through all the teams in the league, but I think we held our own, especially in the second half, and like I said we could have ended up with the three points easily.”

On his first match since May:

“I might have looked fresher than I felt. Hopefully it’s not going to take me long to get the fitness back. That was a good 15-20 minutes, so that’s a start and I’ll have to build on that now and train hard. Whenever I’m called upon again, give my maximum just to get as close to 100% as I can.”