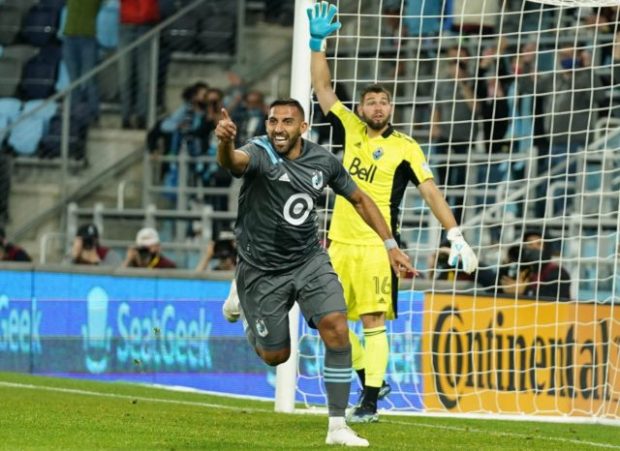 Vancouver Whitecaps riding the crest of a wave, heading into rock bottom Minnesota United, who were still looking for their first point of the season, never mind a victory. What could possibly go wrong?! Well I think we all knew.

Minnesota came away with a hard fought 1-0 win thanks to a 72nd minute winner from substitute Ramon Abila, but it didn’t have to be that way, with Vancouver left rueing a slew of missed chances as their inability to score from open play proved costly, and their set piece play couldn’t save them this time.

Marc Dos Santos made just one change to the starting line-up, bringing Bruno Gaspar in for his first MLS start at right back. Adrian Heath decided to try and spark something for the pointless Minnesota with a change to his goalkeeper, bringing in the experienced Tyler Miller for young Canadian Dayne St Clair.

After a series of fairly flat first half performances so far this season, the Whitecaps started strongly in this one, looking to try and add to Minnesota’s woes early, and they created a number of chances to take the lead with Cristian Dajome firing over a Deiber Caicedo cutback setting the tone five minutes in.

Lucas Cavallini had a couple of chances within a minute of each other midway through the half, heading one wide and then forcing Miller into a save from a powerful header moments later.

Cavallini then forced another save from Miller on the half hour mark from a free kick, as Vancouver continued to press hard, but the breakthrough was proving hard to come by.

Minnesota finally had a look at goal in the 38th minute when Emmanuel Reynoso tried to dance through the Vancouver, getting off a shot which Crepeau saved with ease.

That seemed to finally spark the home side into some life and they started to enjoy more looks at the ball as the half came to a close and Robin Lod had a low shot saved by Crepeau.

Neither team were able to break the scoring though by half time, and Vancouver will have headed in hoping that they wouldn’t come to rue the great chances they didn’t convert, while Minnesota will have been happy at their play towards the end of the half.

It was the Loons who started the second half on the front foot, forcing Crepeau into a leg save, but the ‘Caps responded with a couple of half chances, before Dajome forced a big save from Miller after powering forward in the 56th minute.

All of the Whitecaps to this point had come from set pieces and Ranko Veselinovic nearly added to that tally when he headed a corner narrowly wide just past the hour mark.

The ‘Caps were making all the running again and Dajome had another chance to break the deadlock when he showed some nice skill to set up a chance, which Miller again turned away at point blank range.

Substitute Abila had a great chance to put Minnesota in front in the 68th minute, but he skied the ball over the bar from seven yards out. Vancouver then had an immediate chance in reply as Cavallini bore down on goal, but the Loons defenders managed to close him down enough to prevent the ‘Caps striker getting a clean shot off.

It was an entertaining, fast moving, end to end game now, with both sides fancying their chances to get on the scoresheet. As it was to turn out, it was Minnesota who finally broke that deadlock in the 72nd minute, as an unmarked Abila rose to head home a Lod cross.

You could sense the relief from everyone of a Minnesota persuasion at that goal, but having been ahead and lost at the weekend, the home side were determined to see this one out, and were happy to manage the rest of the match.

That allowed Vancouver to have more of the ball, but as was the story of the match, they simply couldn’t do anything with it. Jake Nerwinski had a great chance to hit home the equaliser after Cavallini knocked a free kick into his path. but he volleyed wide.

That was to disappointingly prove to be the last hurrah for the ‘Caps, and the Loons saw the game out with ease.

Vancouver will look back at this match as a huge wasted opportunity. They had enough chances to come away from this game with not just one point, but all three. Minnesota looked dreadful early and should have been punished. That inability to do that allowed the home side to settle, calm their nerves, and get back into the game.

Dajome was excellent tonight. Buzzing around and a constant threat. The finishing will hopefully. But the continued inability to score from open play is concerning. Not as much as if they weren’t creating chances, but enough to make you question what is behind it. The longer it goes on, the bigger the monkey on their back it becomes. The best way to do that would be at Sporting Kansas City on Sunday. That in itself is not an easy task.

On if there were positives to take away from the performance:

“Yea 100%. We lose the game that probably is the game that we have our best moments this season, not only in big chances created, but also in some spells of the game our reactions to the loss of possession, our ball movement was very good, our threat. We created chances, a lot of them, to do the 1-0. Unfortunately this ball in the second half …the ball gets wide, we’re not organized in that moment, and Lod puts in a cross where we’re 2v2 in the box, normally that shouldn’t happen. Even after that we still had a big chance with Jake. I told the guys in moments that you lose games, lose like this. Lose where you fought, lose where you created, lose where you tried everything.”

On the way the team played:

“it sucks for me to speak about so many positive things in a 1-0 loss, but I told the guys they have to have their head up because there was so many good things. We played a good away game, it was good for the fans. It was two teams that wanted to win. I thought it could’ve been a game with more goals, because there was chances created. It’s that night where those chances don’t go in.”

On the options in midfield:

“I think we have a lot of good options there, I’ve spoke a lot about how important continuity is important. The best teams in the league and the best teams in the world have continuity in their lineup, and that creates habits between players, understanding between players, guys knowing what the teammate likes to do. Slowly we’re starting to see this, but it’s a league where we need depth. That’s important when you have another game coming in on Sunday, then I spoke about the month of July …so everybody’s going to be important.”

“It’s a good performance. We’re not satisfied leaving here without a point, at least the point. We had chances tonight. We know we’re a team that can be dangerous in the attacking third, we created good chances tonight and the ball just didn’t bounce our way for one reason or another. But if we keep playing like this we’re going to put ourselves in a good position to win games going forward this season.”

On the number of chances:

“I think sometimes that’s just the way it goes. We create chances and you put guys in positions where we have quality players that can take those chances. If we keep playing this way we’re going to put ourselves in a good position to go out and win games this season. We’re disappointed to leave here without at least the point. But Minnesota is a good team and credit to them, they capitalize on a chance that’s still unclear, I need to watch it back again. But we felt that we deserved to get at least a point out of here.”

On crosses to Cavallini:

“Cava’s a big presence everywhere on the field, he’s a quality player and he’s a really big presence for us in the defensive end and in the attacking third. Any ball that is near him, he’s going try and put his head on. He wins a lot of duels, he wins a lot of aerial duels. He’s a leader for us and he does so much work off the ball that doesn’t go unnoticed by us. So when I see him in the box you just want to put the ball in an area where he can go and get it. The ball just didn’t bounce our way tonight in the final third and as long as we keep creating those chances, we’re going to put ourselves in a good position.”

“It hurts when we lose like that. When the team gives a big effort and we lose like that but we need to keep going, We need to stay with the positive things from this game and move on to the next game, and get the things we need to work on right in the upcoming game.

On the long day of travel:

“Honestly, it’s a motivation to play in a game in a day like this. And as I said before, the team played very, very well, we had great chances. The other team, they had one big chance and took it. And as I said before, we just have to do the right things right again in the next game, take our chances, and improve as much as we can and prepare for Kansas City on Sunday.”

On the missed chances:

“Obviously, everyone in the team wants to score, wants to help the team, and we all put lots of effort into creating chances. It’s hard in the league to create chances, and it hurts, it obviously hurts when you don’t see those chances go into the back of the net. We just try to focus on putting those chances towards goal, finishing those chances. At the end of the day, we just want to keep going up in the table and getting as many three points as we can.”