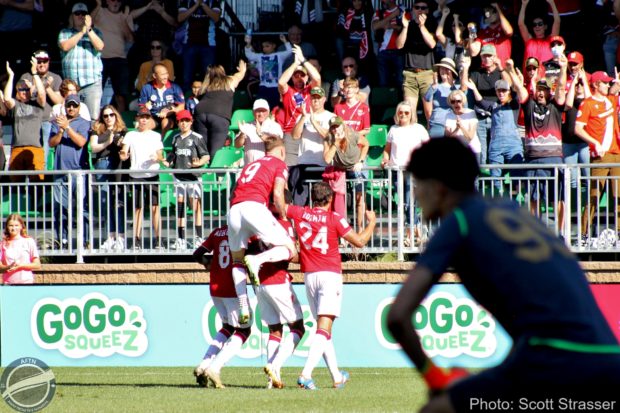 Cavalry FC clinched a Canadian Premier League (CPL) playoff spot for the fourth year in a row on Oct. 2, downing Valour FC 2-1 at Spruce Meadows in their penultimate match of the 2022 regular season.

Tied 1-1 with just under 10 minutes left to play, Cavalry’s Ali Musse produced a piece of magic, smashing the ball into the top corner from 25 yards out to seal the three points and bring Cavalry’s fans at ATCO Field to their feet.

“As soon as I connected, I felt it was a great connection and I knew exactly where it was going to go,” said Musse in the post-game press conference, when asked about his wonder strike. 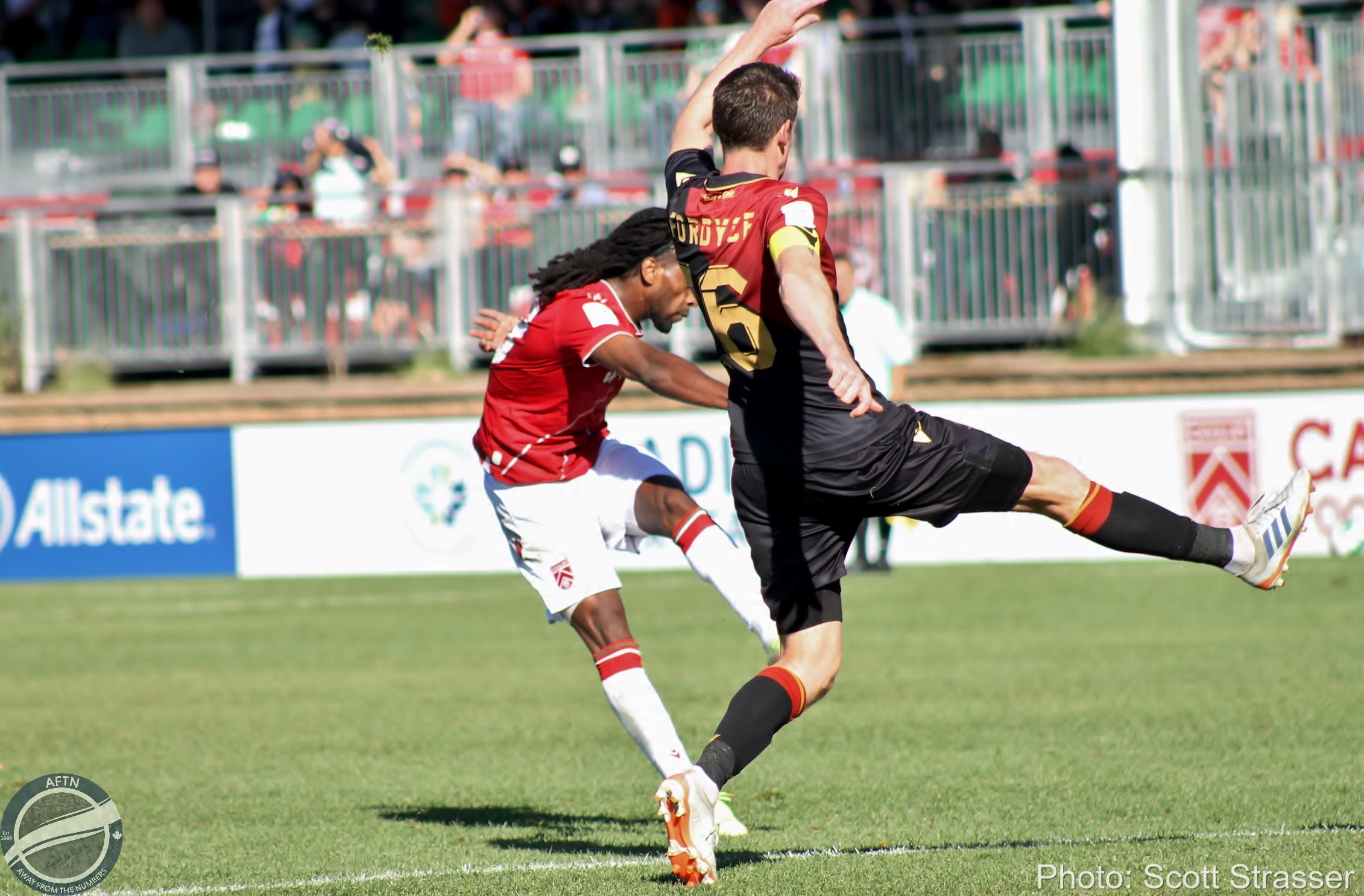 Musse fires home his goal in the 83rd minute

Coming into the match in a do-or-die situation regarding their own playoff chances, Valour’s loss to Cavalry officially eliminates the Winnipeg club from post-season contention.

Fifth-placed Valour still had a slim-to-none shot of making the four-team playoffs, but only if Cavalry lost both of their last two matches and Pacific FC lost to Forge in their Oct. 5 match-up against the Hamiltonians.

That unlikely scenario not happening means Cavalry will be joined in the post-season by Atlético Ottawa, Forge, and Pacific. With just one match left to play for each team, the final four placements of those squads are still to be determined.

Speaking to the media after the match, Valour head coach Phil dos Santos didn’t fault the effort shown by his players against Cavalry, instead lamenting some of Valour’s dropped points from games earlier in the season as justification for why the Winnipeggers weren’t able to squeak into the playoffs this year. 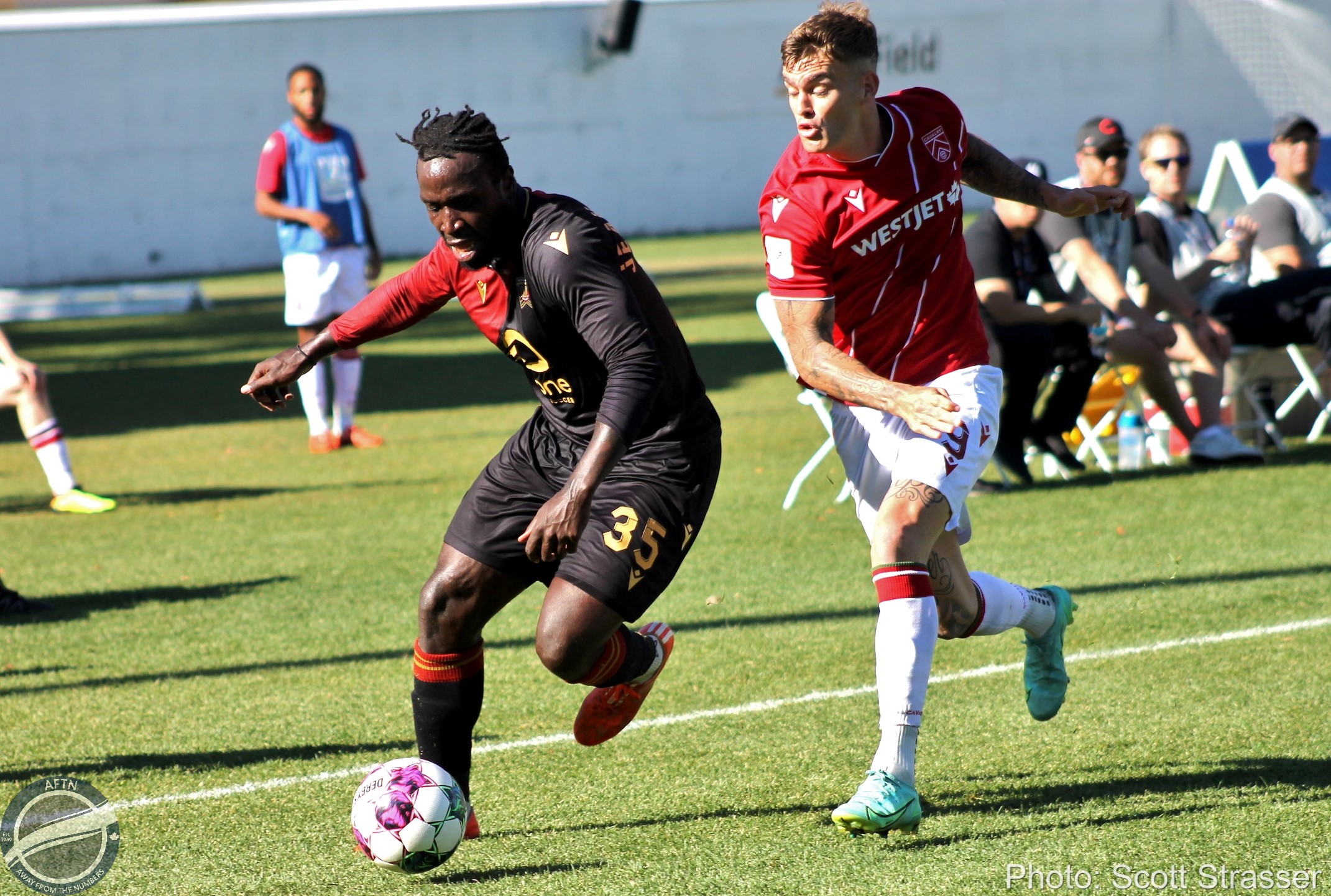 Andrew Jean-Baptiste and Myer Bevan challenge for the ball

“I look back at home games that we lost points, I look back after our two wins against Forge, going on the road for three games…that’s what hurt us,” he said. “It’s not just one game. I think coming here was already hard enough, having to come here and fight for our lives. You’re playing with fire, and we’ve been playing with fire for the last few games.

“The mentality of our group was fantastic [today]. I never questioned their integrity, or their desire to come to places like this and win. I think if we played like we played today, with the same commitment and passion and fight in the games we didn’t secure points on the road in, we wouldn’t be in this position right now.”

Cavalry broke the deadlock in what was a cagey first half – and an evenly fought battle – in the 38th minute. Mikaël Cantave crossed the ball into the box from the left wing, Musse headed it down, and striker Joe Mason redirected it into the net off of his face.

The hosts took the one-goal lead into the second half, but Valour responded well after the restart, applying plenty of pressure in the early minutes of the second interval. 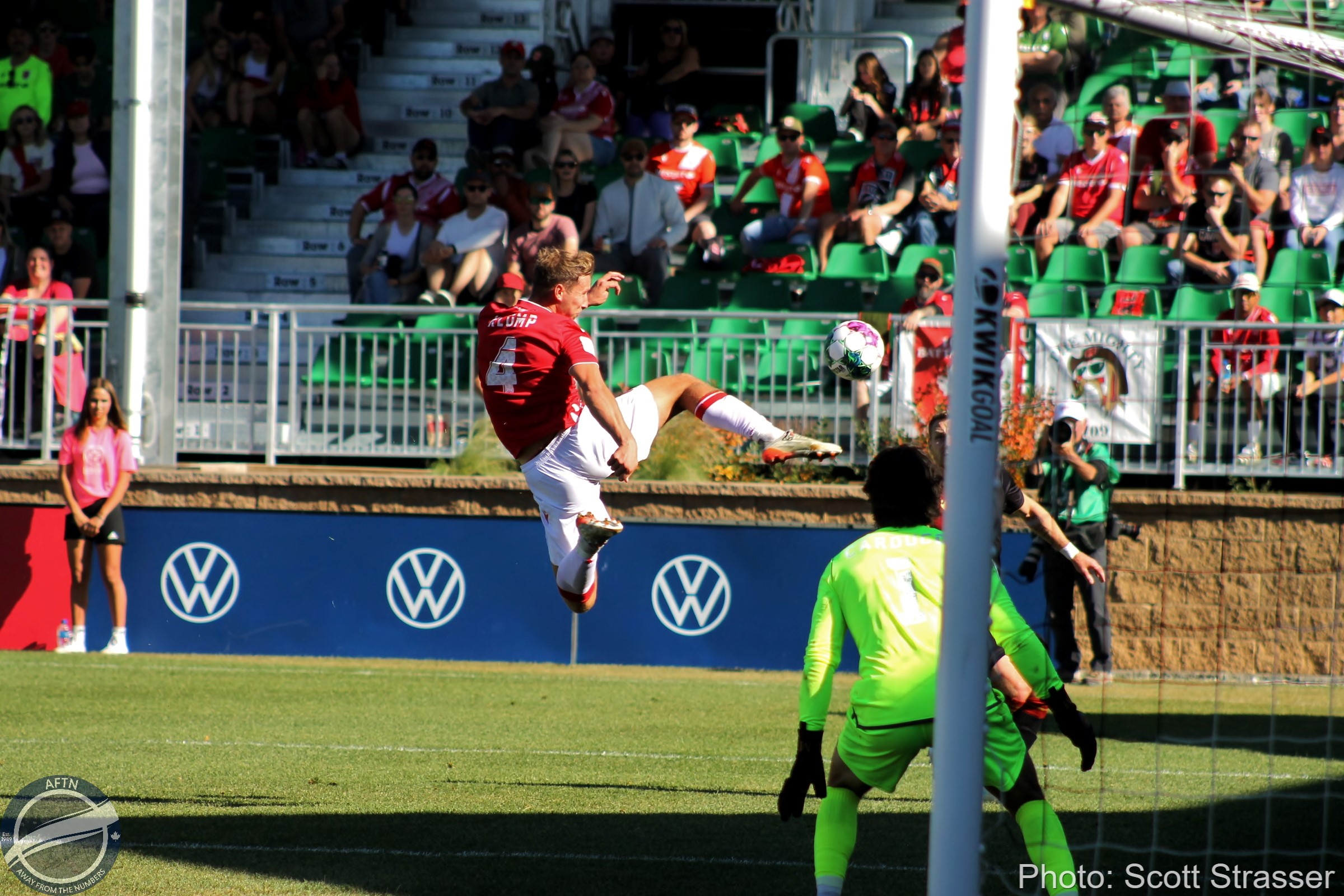 The visitors’ hard work quickly paid with a goal by Billy Forbes in the 48th minute. Getting in behind Cavalry centre back Daan Klomp, Forbes was able to rise above the big Dutch defender to nod home the ball after a great outside-of-the-boot cross from Sean Rea into Cavalry’s net. The pass marked Rea’s ninth assist of the CPL season. 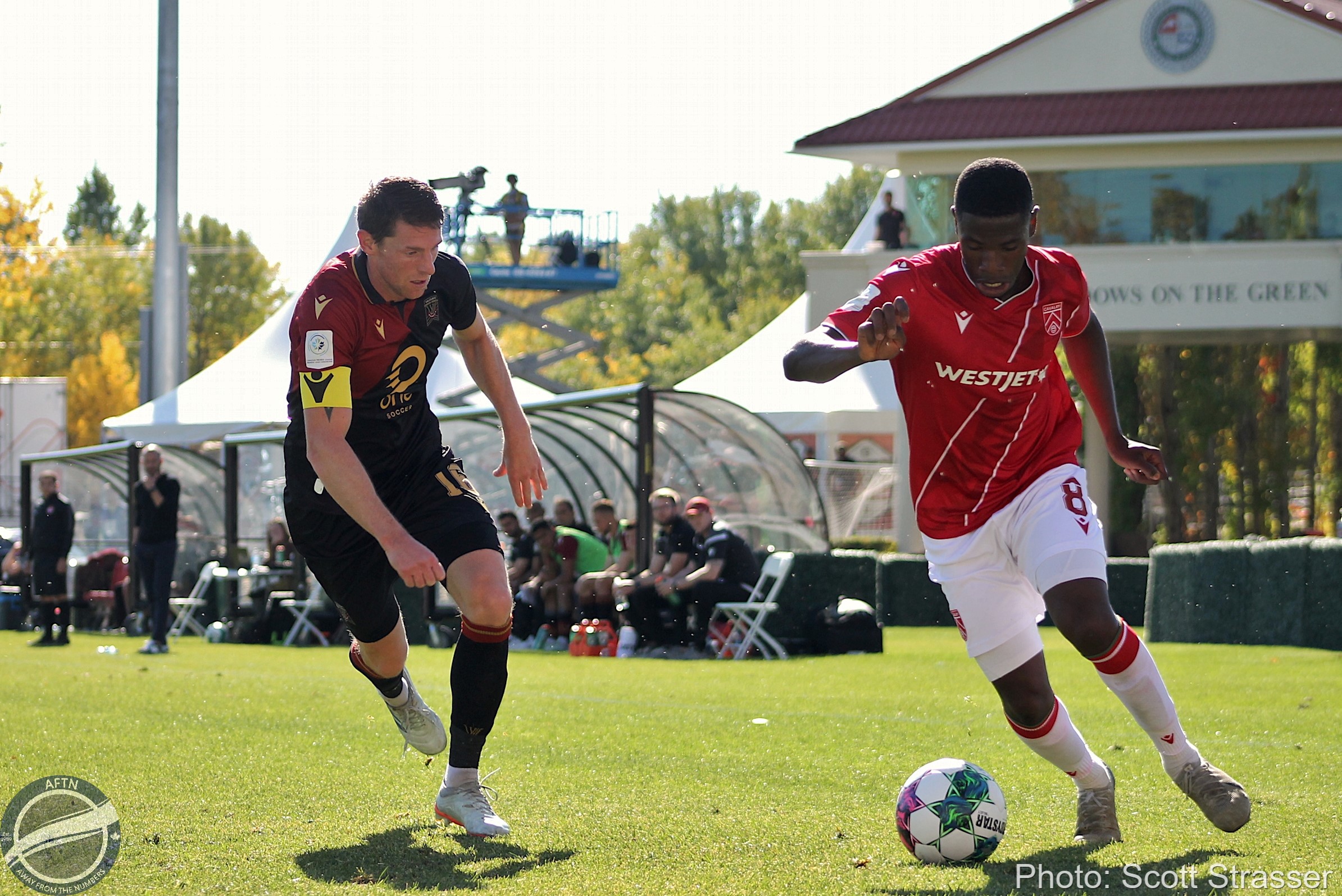 The visitors almost took the lead a few minutes later, with Walter Ponce redirecting a cross from Forbes just wide of Cavalry’s post.

“At the end of the day, when you fall fighting, you can’t blame the guys,” dos Santos said. “But like I said, it’s not just this game. We could’ve and should’ve done the job earlier [in the season].”

Musse – a Winnipeg native who just so happened to be playing against his former club – put any hopes of Valour’s playoff push to bed with his superb strike in the 83rd minute. The goal came following a quickly taken cross from Roberto Alercón that Musse controlled before firing the ball into the top corner. 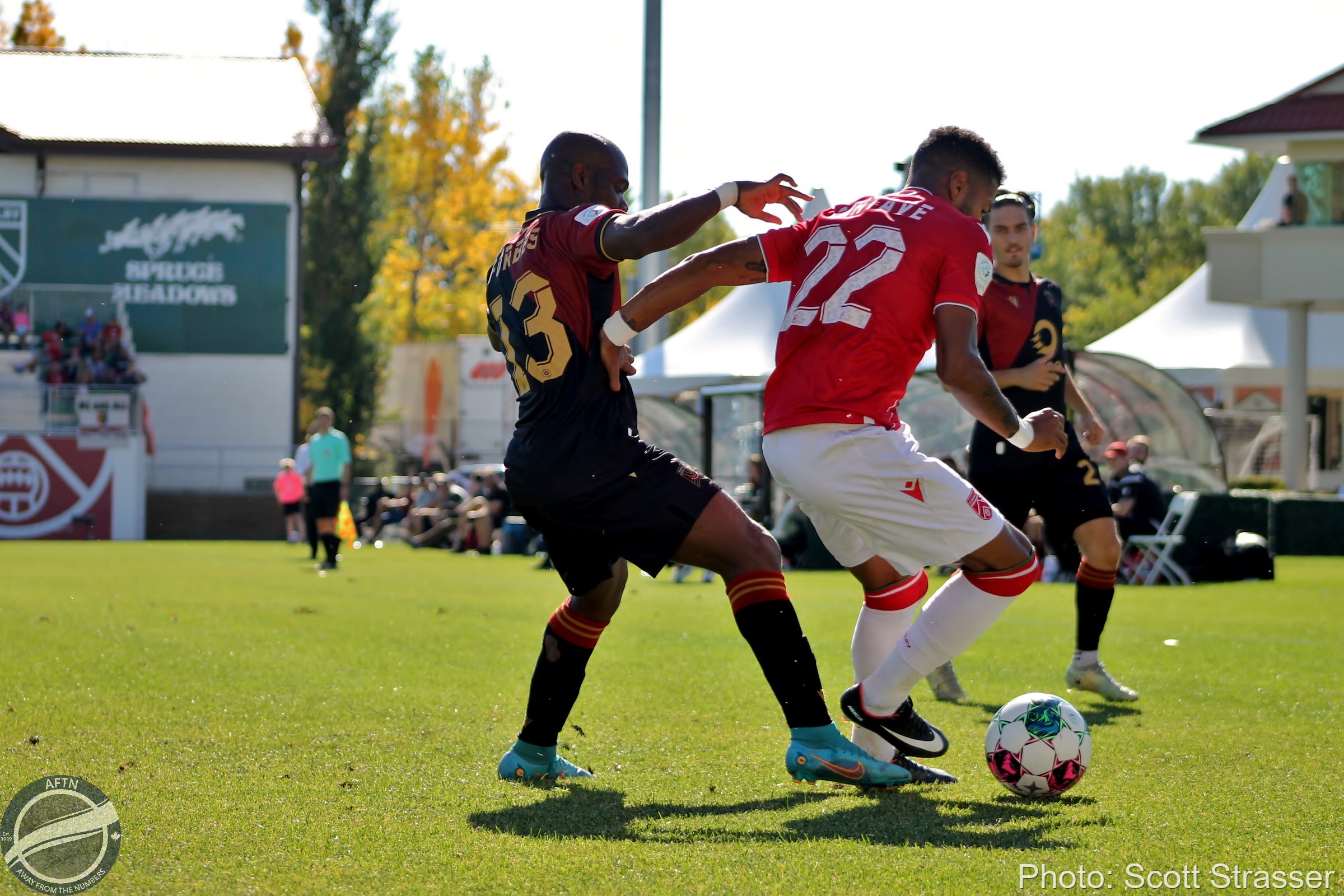 Mikaël Cantave shields the ball (right) in the first half

Head coach Tommy Wheeldon Jr. said one of Cavalry’s main goals throughout the season has been to get into the playoffs, so it felt positive to achieve that on Sunday.

“No matter how you start the race, it’s how you finish that counts,” he said. “We’ve topped the table and not picked up any silverware [in the past].

“We knew we had three bites at the cherry. It didn’t work last week, but we knew we wanted to take this one and not leave it to the last game of the season.”

Wheeldon Jr. added Musse’s strike put an exclamation point on what was a practical, gritty performance from the team.

“Our fans deserved that,” he said. “They’ve been terrific this season.

“You’re seeing people leaving Spruce Meadows singing and dancing and that’s what we wanted to bring here – an entertaining game. Our fans deserved to see a spectacular goal like that and three points to get us back into the playoffs.”

Cavalry FC’s last match of the regular season will be against Pacific FC next Saturday, Oct. 8 at ATCO Field, while Valour travels to Edmonton for their final outing of 2022. 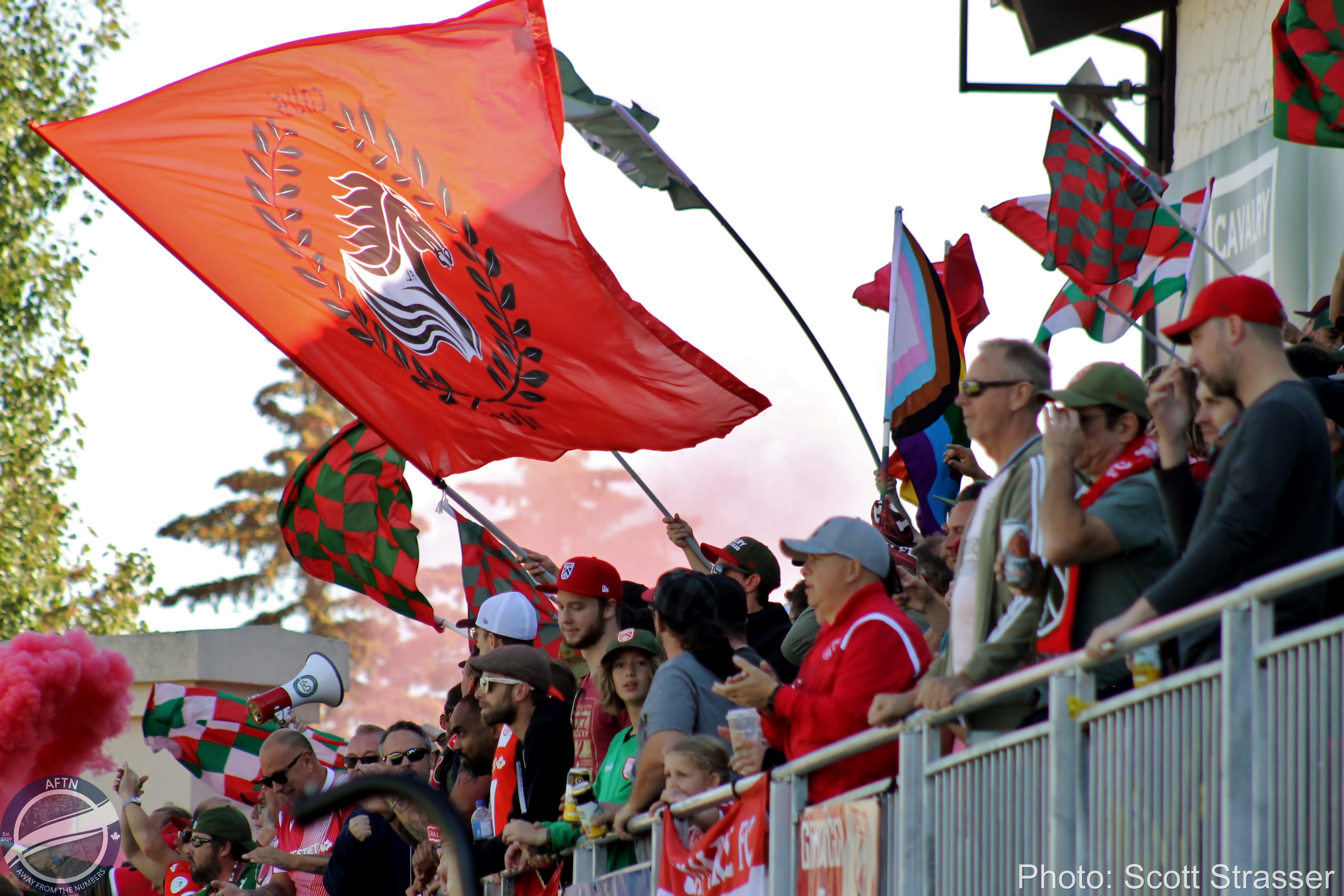