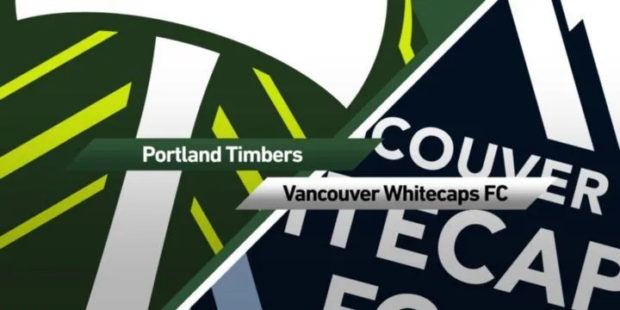 Heading into the latest Cascadia Cup clash for Vancouver Whitecaps down in Portland, if you’d offered me a point, I’d have been absolutely delighted. Coming away from it, there’s a feeling of being gutted that that was all that they did come away with after a tremendous performance that saw them take the lead through a Brian White goal, put in a resilient defensive effort led by first time starter Isaac Boehmer, and moving into the playoff places before one misjudged challenge in the box saw it all undone and they had to settle for a share of the spoils in a 1-1 draw and rue not making their spell of pressure pay more.

With injuries keeping some out, but recovery putting some back into the reckoning, Vanni Sartini made five changes to the team that got a battling point midweek in Cincinnati, with young goalkeeper Boehmer getting his first MLS start with Cody Cropper still in concussion protocol after his scary collision on Wednesday. Perhaps the key returnee for the ‘Caps, however, was defensive midfielder Andres Cubas being given the all clear to play, much needed in such a red hot derby atmosphere.

After a fairly quiet start from both team, Boehmer was the first keeper called into action, making a sprawling save from a fierce Cristhian Paredes shot in the 24th minute.

The Whitecaps hadn’t really threatened at the other end, but that all changed in dramatic fashion in the 32nd minute when Ryan Raposo sent in a beautiful curling pinpoint cross from the left into the box and it was met by a fantastic diving header from White to give Vancouver a shock lead.

Brian White with the diving header to give @WhitecapsFC the lead! pic.twitter.com/fWCNYY4Gi5

The ‘Caps came close to adding a second just minutes later on a quick break, but Cristian Dajome made the wrong choice in going for goal instead of playing to the support at the back post and the Timbers breathed a sigh of relief.

Despite the pressure the Whitecaps couldn’t find a second. Would they come to rue that against a Portland side that looked a shadow of the team that beat Seattle a week ago?

The Whitecaps went for the jugular straight from the second half kick off forcing a double save from Timbers keeper Alijaz Ivacic within the first 15 seconds, first from White and then Gauld.

Portland had a tremendous opportunity to level moments later when Russell Teibert mistimed an attempted headed clearance and it instead fell to Jaroslaw Niezgoda a few yards out but he blasted high and over.

The team exchanged chances in a high paced spell, with both teams moving the ball well and playing some entertaining football. Portland were pushing harder, but the Vancouver defence was putting in a solid shift and get their bodies and feet in front of everything being thrown at them, with Jake Nerwinski coming up with a big block on a Diego Chara shot just past the hour mark.

The Timbers nearly grabbed the equaliser in the 76th minute but Boehmer brought off a superb stop to keep out a rocket of a Claudio Bravo shot.

With the minutes ticking down, Vancouver’s defensive resolve was finally broken and in the worst of ways with Tristan Blackmon’s shove in the back gave away a penalty, which Mora duly converted.

That set up a nervy finish, with the home crowd roaring Portland on, but Vancouver held firm, had a couple of chances of their own, and came away with a well earned point.

In hindsight, the ‘Caps will be disappointed not to have left with all three. For a spell they were sitting in the playoff places, but a moment of defensive madness and they finish the weekend in 10th, albeit just one point back of the playoff line.

It’s so tight at the moment in the West that every point is at a premium right now, but taking two battling points on the road will certainly give Vancouver a boost and with players coming back from injury and some important home games coming up, they have to now build on their recent good form and launch a sustained push.

That starts next Saturday when Chicago come to town. Three points has to be the expectation there and anything less will undo the good work from the last two matches.

“The game was very good. I think we did a very good performance at the end of a very demanding week with big travel East in the middle of the week. Coming here to a team that is in a good run of form and in front of their fans, it’s not easy. But we’ve been the best team and we are a little bit frustrated at the end with the tie because I think we deserved to win. So everyone did their own part. Some of the guys I had to sub because, you know, the third game in six days started to feel on their legs. It was a very good performance, it’s a good point. We take the point of course, at the end, it’s a point on the road and in order to win at home against Chicago on Saturday and make that game four points out of the past two.”

“I’m happy but you know, we know that Brian is getting back in condition. So I think he did a really good game. The goal was beautiful, it was everything we tried during the week. All our principals, the two wingbacks being very wide giving width, the two midfielders creating space in the middle with a pivot man, a movement and freeing Ryan on one side crossing and having the two strikers in the box. It was really good but not only the goal, we had a lot of plays that were really good.I remember one like in minute 70, Ryan Raposo gave a ball, and the goalkeeper made a fantastic getting out to anticipate at the last second Ryan Gauld. So it’s a very good game and it’s unfair that we didn’t win.”

“It’s good to get out in front of them and get the go-ahead goal, but it’s obviously difficult to come into Portland and play super defensively like we did. It’s always going to be a challenge, they have their fans behind them. They’re a good team and just the way the game went, we had to be ultra defensive and locked in and unfortunately, we let them get a PK and they tied the game up. But overall, I think it was a great effort from the team defensively, because it’s a difficult game in difficult circumstances. So it’s good to come out with a point.”

“I think he did a great job. Obviously unlucky to concede the penalty. But at the end of the day he came up with huge saves. He kept us in the game and you know, credit to him, he was unbelievable tonight and we’re really happy with his performance.”

On his first MLS start:

“I thought I did well. It would have been nice to get three points, that’s for sure. I thought maybe if I’d waited a second on the penalty I could have reached back and got it. But that would have been too much of a fairy tale I think. So, it is what it is.”

What he has learned from his experience:

“It comes at you quick. I think that the most important thing is that you just have to be mentally prepared for it and you know, I was able to handle it and I just want to keep on growing.”