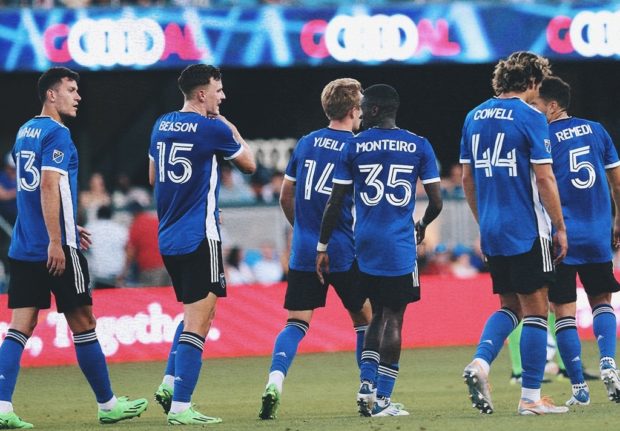 Vancouver Whitecaps headed to California to take on San Jose Earthquakes on Sunday evening, leaving on the wrong end of a 2-0 scoreline that all but kills off their chances of a second straight postseason appearance.

Jeremy Ebobisse and Jamiro Monteiro’s first half strikes did the damage for the Quakes and although the Whitecaps rallied a little in the second half, it was a lacklustre performance that saw them get exactly what they deserved and left you feeling the gulf that the ‘Caps still have between the best teams in MLS and where they currently are.

Vanni Sartini made two changes to the team that folded like a tower of cards at home to Nashville last weekend, with Russell Teibert and Cristian Dajome coming into a starting line-up that went with a 3-5-2 formation.

It was another first half to forget for the Whitecaps and they fell behind yet again to a self-inflicted early goal just four minutes in when Cade Cowell just danced his way through the final third, leaving two ‘Caps on their asses, eventually squaring a ball that ran through to Ebobisse, who buried it with aplomb past Thomas Hasal for his 15th goal of the season.

A terrible start for Vancouver and they just couldn’t get into the game to threaten any comeback, with a long range Ryan Gauld effort right at JT Marcinkowski in the 18th minute and a Ranko Veselinovic header that the keeper juggled four minutes later the best they could muster.

San Jose weren’t offering up much either, but they doubled their lead in the 34th minute when Cristian Espinoza played a neat ball inside to a wide open Monteiro, who fired home the Quakes’ second.

Cowell nearly made it three minutes later, but Hasal palmed the ball away at his near post, then Espinoza flashed one just wide.

The ‘Caps day was going from bad to worse, with Gauld picking up a booking that will see his miss the next match for yellow card accumulation.

Even the referee must have felt sorry for the Whitecaps, blowing for half time a few seconds early.

Was there any way back for Vancouver? They had to find it to save their season if we’re being totally realistic.

And although they showed glimpses of grandeur, moving the ball around well at times and creating opportunities, the killer touch was simply not there, perhaps best summed up by a shocking miss from Brian White right in front of goal just before the hour mark.

Gauld and Gressell had chances and Tristan Blackmon had the ball in the net in the 69th minute but was rightly ruled offside, but the ‘Caps couldn’t get that first goal to try and spark any sort of comeback and the game fizzled out, as basically did Vancouver’s playoff chances.

San Jose were a poor team, but they were a team Vancouver couldn’t find a way to break down. While the win moved the Quakes off the foot of the table and to within four points of the Whitecaps, for Vancouver, they now fall to 10th in the West, eight points off the playoff line with five games left to play and a veritable mountain left to climb.

The Whitecaps run-in is tough to say the least. If they can’t take anything from the worst team in the conference, it’s hard to envisage them finishing the regular season with five straight wins and that’s what it looks like they now need.

“I was speaking to the team now, because there’s a lot of frustration of course. But I said to them that we asked after last week, a response in terms of attitude, in terms of fighting spirit, in terms of trying to do the thing that we do and tonight we tried. We tried to do it. For this side, I don’t want to say I’m satisfied, but I’m okay with the performance. Of course we made two very silly mistakes. One Javain goes down, slips, a lot of players slipped down today, it’s okay that can happen and they scored a good goal. Then the second one is the throw in, when we try every time to be lower than the ball. We had four players higher than the ball so it was easy for them to play on the other side. But besides that, I think we outshot them. We had clear chances in the second half, we had even more clear chances than they scored, the one with Brian, two with Julian actually, one great save and the other one was with Sebastian going there. In the first half between the first and the second goal we were the best team I think, and that hurt us. But we paid the price and we lost the game.”

On the mindset in the locker room:

“We are very frustrated that we lost a game that we’ve considered very important. So there was a player willing to say we need to do better and I agree with them, but I don’t like to speak a lot with the players after the game because emotions run high and nobody has a clear understanding of what happened, I would say precisely during the game. We need to analyze the game with video and everything in order to deal with the player and say we should have done better. Now the only thing that we can say is what we did was not enough and we need to do better.”

“Disappointing, because we know the implications of losing right now. There aren’t many games left and there’s a lot of ground we need to make up. That being said, if you look at the standings, we still have a chance mathematically, we’re still in it. That playoff line is still reachable, but tonight it’s an opportunity missed. We’ve said this a little bit this year that there are spells of the game that we played really well. But I think we lacked in our own box and in their box. So I think in the final thirds of the game, we need to be a little bit more clinical, and a little bit more quality and we have the guys to do it. We showed that last year and we’ve shown that this year. We’re just unfortunate in moments where we didn’t have a little bit of luck. Where it felt like, I don’t want to talk about last year too much, but back then the bounces were going our way. We don’t take it lightly, everybody in that locker room cares and it’s a tough one.”

On the team’s mood:

“It’s a disappointed group of guys. We know that this is a game that we can win and we showed that tonight, we had chances to go out and win and I think we made a couple of errors and that was unfortunate to lead to two goals. But I thought for, again for long spells of the game. I thought we played well. We know the quality that we have in that locker room and we know what we have as a group. It’s been tough for us to put it together for 90 minutes this season. I’ll start with myself and I need to be better. I think everybody in that locker room shares that sentiment that we need to be better individually and we need to be better collectively if we want to see ourselves as a playoff team. Fortunately for us we have more games to play this season to set that right.”