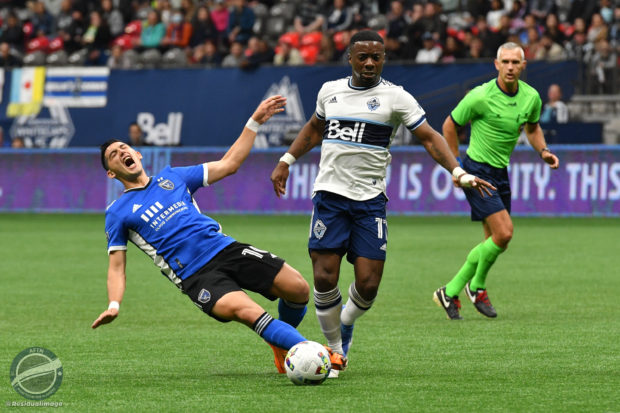 Things came crashing down fast for the Whitecaps, with a drubbing at the hands of Nashville shunting them to five points adrift of the final playoff spot in the West. With just six matches to play, three of them on the road, time is running short to pull a miraculous turnaround.

The ‘Caps have a pitiful 2-8-4 record away from home this season, last picking up three points on the road back in the middle of June. If there’s ever a team against which to reverse that trend it’s San Jose, who currently sit dead last in the conference. If they can’t do so then there won’t be much hope left at all in terms of clinching back to back postseason berths.

One player who will be missing out for sure is Lucas Cavallini, who after an absolutely inexcusable red card last weekend is likely to be suspended for multiple matches (although as of Saturday night there has not been official word from MLS). This assures Brian White’s spot in the starting lineup against the Quakes, with either Alessandro Schöpf or Cristian Dájome the most likely to slot in beside him and Ryan Gauld.

When it comes to the defence, the ‘Caps have the frustrating problem of goals seeming like they are coming more from individual blunders rather than team-wide structural issues. Nashville scored their three goals last weekend on a combined xG of under 1 at the time of the third goal, and ended with just 1.5 for the match.

The ‘Caps have underperformed defensively compared to their expected goals against by a noteworthy margin this season (they’ve been much closer to even in terms of expected performance on offense), showing the lack of a lockdown goalkeeper as well as a propensity for glaring mental errors.

An example of the latter is Sebastian Berhalter’s giveaway and subsequent refusal to take a foul leading to Randall Leal bombing downfield before unleashing a long-range drive to open the scoring for Nashville. Or both of Nashville’s other goals coming of set pieces. What changes are there to be made? Jake Nerwinski could come in for either Javain Brown or Tristan Blackmon. Cody Cropper could come back in for Thomas Hasal. But neither of those moves would really change much.

That could be read as fatalistic, but I don’t think that it necessarily is. I believe that the ‘Caps have enough within the current squad to make the playoffs! In previous weeks they’ve shown some real flashes, but the issue is that they seem to often need to fall behind early before kicking into gear properly. It’s led to some fantastic grandstand finishes, but it’s also led to some depressing losses.

I’m just some fan watching from home, so I don’t know what the heck the reason is for the wildly inconsistent starts to matches, or how to fix it. You would think that the team would be just as frustrated by it as those watching, but it hasn’t led to a turnaround just yet. We’ll have to see if there is some sort of response and fight back after the latest loss.

Looking at the hosts, San Jose are coming off a 1-0 loss to SKC last weekend. Before that they’d managed to pull off a surprise 2-1 home win over LAFC, but that’s their only victory in the last seven weeks. The match between these two sides at BC Place earlier this year was one of those aforementioned grandstand finishes, a 3-3 draw with all six goals scored in the second half including an Érik Godoy 90th minute equalizer back in May.

The Earthquakes have the worst defensive record in the West, conceding a hair over two goals per match on the season. A bright spot this year has been the play of Jeremy Ebobisse, who has scored 14 goals, but there has not been a huge amount to cheer for in the Bay Area this season.

There is still a chance for there to be something real to cheer for in these final few weeks in Vancouver. The Whitecaps took a shot to the jaw last time out, and have to bounce back Sunday night if hope is to be kept alive. Otherwise, the page starts to turn to 2023 a little early.