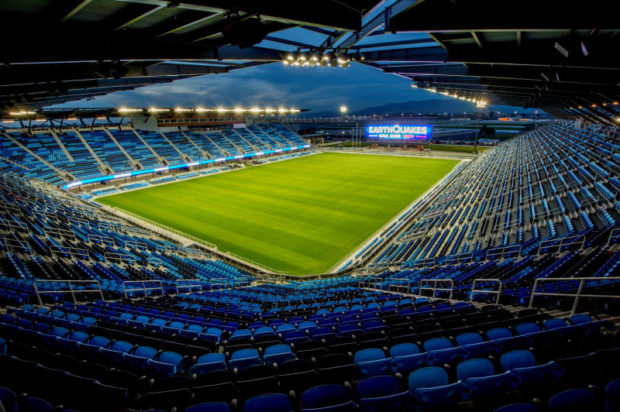 Previous games in California between Vancouver Whitecaps and San Jose Earthquakes have served up some dull and low scoring affairs, but Avaya Stadium was the place for action and thrills on Saturday night in a match that turned on David Ousted’s sending off midway through the first half.

The Whitecaps looked to be in control and cruising after going up two goals in the early going courtesy of Erik Hurtado and Nicolas Mezquida, but going down to ten men fired up the Quakes, who took over the game and were well worth their three points in the end after putting the Vancouver defence under intense pressure for an hour.

Chris Wondolowski, Nick Lima, and Anibal Godoy did the damage in the 3-2 win, but it could have been more and the ‘Caps are once again left wondering about individual defensive mistake costing them dear.

With the huge CONCACAF Champions League semi-final against Tigres coming up in 72 hours, it was always going to be tough balancing act for Carl Robinson around team selection, or as he told AFTN on Wednesday, “Yeah, it’s a nightmare. A nightmare. I could say ‘no, it’s ok’, but it’s a nightmare.”

That nightmare ended up with five changes to the team that started last week’s scoreless draw at home to Philadelphia, with all three of Vancouver’s Designated Players not in the starting XI, and two of them not even on the bench. That gave Residency product Ben McKendry his first MLS start and minutes, after a patient wait.

It was still a strong Vancouver line-up and one which you felt could take the game to San Jose, and the ‘Caps did just that from that start pressuring early and getting the breakthrough just two minutes in when Hurtado showed great hustle and perseverance to get a split second chance, which he finished superbly on the volley from ten yards out.

Wondolowski thought he’d brought the Quakes level in the 13th minute but he was quickly flagged for offside before he fired the ball past Ousted.

Vancouver were looking the better side and looked to add to their tally. They did just that in the 17th minute and it was Hurtado again who had a huge part to play, showing strong play in the box before setting up Mezquida who fired home.

Robinson’s nightmare had now gone beyond probably his wildest dreams, with Vancouver looking good for their first ever win in San Jose, but the night terrors were to come flooding back five minutes later when Ousted was sent off after flying out of his box and bringing down Wondolowski on the edge of the ‘Caps box after being left out to dry by both his centre back as both Christian Dean and Kendall Waston went and missed the same high ball forward.

There was no debate about the sending off, with Ousted’s trailing leg being his undoing, but should have stayed in his box, possibly giving up a goal but keeping the ‘Caps full numbers still on the park? That was certainly one of the big debates of the night. For me though, he had to come out there and most goalkeepers would. He does have a tendency for flying out of his box more than other goalies though.

Paolo Tornaghi came in, with Mezquida being the man to make way. It was a staggering substitution in view of the poor defensive play continually shown by Kekuta Manneh and Cristian Techera, and it was to cost them. San Jose sensed blood but the Italian had a couple of good saves in his opening minutes but the Quakes intense pressure soon paid off and Wondolowski pulled one back in the 32nd minute.

And he thought he’d tied it up five minutes later when he pounced on a rebound off Tornaghi, but once again it was called back for offside.

Vancouver regained their composure and had the better of the closing minutes of the half, but would have been mightily relieved to hear the half time whistle and head in with a narrow lead.

It felt somewhat inevitable that San Jose were going to get back on to at least level terms and they did that nine minutes into the second half, after a promising start to the second 45 minutes.

Waston and Techera allowed substitute Jahmir Hyka to send a ball to Wondolowski at the back post and the striker cut it back perfectly for Lima to blast home the equaliser, after Manneh failed to close him down.

The Quakes nearly took the lead two minutes later forcing a couple of chances that the ‘Caps scrambled away. But only just.

For Vancouver to take anything from this game now would go down as one of their best MLS performances. San Jose were pushing hard for the go-ahead goal, but the ‘Caps still had hopes and brought on a pair of big guns in Christian Bolanos and Fredy Montero.

Montero should have done better to get on to a long ball from Bolanos in the 72nd minute, but he couldn’t bring it down.

Vancouver were showing signs of life but Godoy extinguished them with a stunning, dipping 25 yarder into the top left corner to fire San Jose ahead for the first time in the match.

It was lights out for Vancouver’s hopes and they were left chasing shadows for the last ten minutes, with San Jose easily getting to the final whistle with all three points.

Certainly a massively disappointing end result after such a spectacular start. There’s still questions around the Whitecaps defence and whether those individual mistakes are ever going to be eradicated, but there were some positives too.

Hurtado looked sharp and hopefully that early goal can give him some confidence to push on and get to the double figures that Robinson’s challenged him to hit this year. McKendry looked good for most of his MLS debut, and added an attacking bite to the DM role that others lack.

The biggest positive is that some key guys were rested before the Tigres game. Whether that makes any difference, we’ll soon find out. For now, we’re just left rueing what might have been but for a moment of madness on the edge of the Whitecaps box.

On Vancouver’s performance before the red card:

“First 20 minutes of the game we were excellent in our play. Thought the approach to the game, we played on the front foot and we got two goals that we thoroughly deserved. It seemed from that moment on, then the game changed with that turning point. Outstanding in the first 20 minutes the way we played football and the way we pressed. I’ve got to credit the work they’ve put in for 75-plus minutes in the end, as well.”

On the team’s defensive errors:

“I think each goal you have to evaluate and the first goal is a mistake. The two center backs come and the goalkeepers comes and he probably doesn’t need to and it affects the whole dynamic of the game because the referee, I hope he’s got it right, sends him off and obviously we’re down to 10 men so we’ve got to make changes. The second goal, a cross comes in we deal with the cross, but then the second ball we lose our runner, which is really important in this day and age. And the third goal is a very good strike from the edge of the box.”

On his goal tonight:

“The ball went up, I was battling for it with the center back and got a little nudge and it landed to me, so I just tried to put it on target.”

On scoring on his return to San Jose:

“It brought up a lot of good memories. I went to college here at Santa Clara and I went to almost every San Jose Earthquakes game so it was kind of surreal that it went in the back of the net and it was a goal.”

On playing a man down for 60-plus minutes:

“It’s always difficult when you go down a man, but the boys put in a solid effort tonight, running their butts off, trying to press, trying to shut down guys and you can’t really ask more from that.”

On Vancouver’s inability to hold their early lead:

“We’re going to have to go back and look at the film and see what happened.”

On the team’s momentum heading into their Champions League match against Tigres next week:

“We want to take positives from the game and we want to go into this game in Mexico on Tuesday with positive vibes so that’s what we’re going to do.”

On making the trip to Mexico for the team’s Champions League match next week:

“It’s very exciting. Growing up, we watched Champions League and it’s amazing to be able to play in a game like this. Excited for the atmosphere in Mexico against Tigres and looking forward to it.”