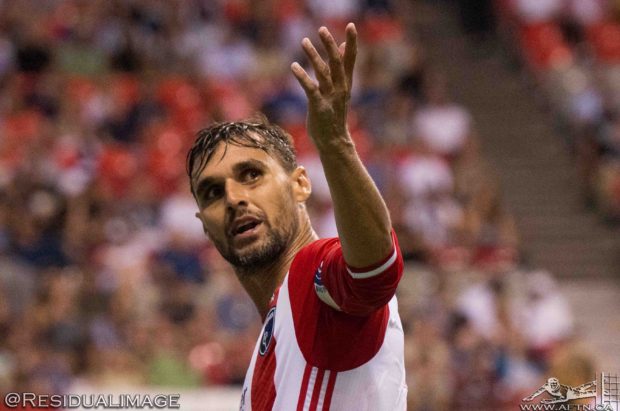 The Whitecaps travel to California for their first away match of the new MLS season, after picking up a solitary point in a dire first game at home to Philadelphia Union. The ‘Caps showed very little going forward, but will take encouragement from a clean sheet and the improving fitness of their newly acquired strike force. With the historic two-legged match-up against Tigres looming, the Whitecaps coaching staff have plenty of decisions to make regarding squad selection.

Before we get into all that, a quick look at San Jose Earthquakes. The Quakes are playing Canadian opposition for the second time this season, having beaten the Montreal Impact 1-0 in their opening match at the Avaya Stadium. A gorgeous goal from Anibal Godoy early in the game saw them grab all three points, and by all accounts, it was a rather comfortable afternoon for San Jose defensively.

The San Jose roster has not changed drastically in the offseason; they also play a simple 4-4-2, with the evergreen Chris Wondolowski leading the line. I did notice that they pressed very high against Montreal’s ball playing defender Laurent Ciman, which may bode well for the Whitecaps’ counter-attacking mentality.

With the quick turnaround, and the importance of next week’s game against Mexican giants Tigres, we’re highly likely to see two very different teams in the next two match-ups.

In San Jose, my expectation was that we will have David Ousted in goal, with a back four that consists of Sheanon Williams, Tim Parker, Kendall Waston and Jordan Harvey, and I didn’t think this will change significantly for the Tigres game. But Carl Robinson indicated on TSN Radio on Friday that Christian Dean will be getting the start in San Jose, so you have to feel it’s most likely going to be for Parker, unless they’re wanting to keep Waston fresh for Tuesday.

I could see Matias Laba starting both games, but with Andrew Jacobson getting the nod alongside him in San Jose and Russell Teibert in Mexico. We could see the three attacking midfielders completely swapped out for the games, with Mauro Rosales making his return on the right side, Brek Shea playing behind the striker, and Alphonso Davies on the left wing in MLS action.

With Fredy Montero working his way back to fitness, I think we should save him for the big game in Mexico, which means giving Erik Hurtado another start in San Jose. That won’t be a popular choice with some, but the options are very limited. It’s a lot to ask of Kyle Greig to come in and start and Shea showed last week that this control may not be best suited as an out and out striker. To his credit, Hurtado works hard defensively, which suits the likely counter attacking mentality that Robbo will use in California.

The speed of Davies will be crucial, and the rest of the team need to get into positions to provide and receive from him. Is it somewhat crazy that we’re basing the success of our attack around a 16-year-old?!

All things considered, a draw in this game would not be a bad result, bearing in mind the logistical nightmare that two away games in two different countries is. If Rosales is indeed in the side, we will have a good set-piece provider too. The ‘Caps really need to improve their attacking on corners; they seem very ineffectual in those situations.

Will these two sides cancel each other out?

Will the rotated squad offer something different to what we can consider the regular first team?

Do you risk playing or subbing in the likes of Kekuta Manneh and Fredy Montero, or leave them fully rested for Champions League action?

Nick: 0-0 bore draw. Both of these teams don’t look like generating much.

Dan: 1-1. Defensive slips on both sides open up the scoring a bit but nothing decisive happens.