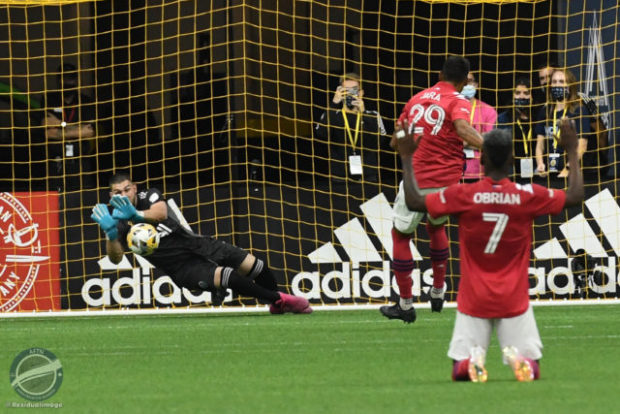 Let’s make no bones about it, the next three games for Vancouver Whitecaps are absolutely massive in terms of shaping their playoff dreams. Taking seven points is the minimum required, but it really needs to be all nine available when you’re playing three sides below you in the Western Conference standings.

Those games got underway at BC Place on Saturday evening and the Whitecaps completed part one of the trifecta with dramatic 1-0 win over FC Dallas.

Brian White’s 20th minute header was all the separated the teams, but it was Max Crepeau’s 94th minute penalty save from Franco Jara that will be grabbing all the headlines, as Vancouver’s playoff push remains very much on course.

Vanni Sartini made changes to the starting line-up that came away with a point in a draw at Colorado last weekend, some enforced, with Jake Nerwinski coming in for the injured Florian Jungwirth in a three at the back defence, and some experimental, with Lucas Cavallini partnering White in a two striker formation.

The ‘Caps came close to taking the lead just three minutes in when Cristian Dajome’s header off a Ryan Gauld corner was cleared off the line, and the Colombian came close again six minutes later, flashing a shot just past the left post.

Dallas responded with a chance of their own and Max Crepeau produced a save to keep out a Jader Obrian show off a quick free kick.

The Whitecaps’ slow first half starts have been well documented, but they were looking lively in this one and went ahead in the 20th minute when White got onto the end of a pin perfect Russell Teibert cross to nip in ahead of Dallas keeper Jimmy Maurer and head home from seven yards out.

Chances were at a premium for much of the rest of the half, but Cavallini came close to doubling the Whitecaps lead in the 40th minute, but could only look on as Maurer tipped his goalbound header over the bar.

White had a chance to grab his second of the night two minutes later, but pulled his shot from a Dajome cutback just wide and Vancouver had to settle for a one goal lead at the half.

The second half saw both sides create some half chance, but nothing too dangerous for adding to the scoreline.

The most noteworthy moment saw Cavallini pick up yet another stupid booking just before the hour mark for a pointless lunge, and he was substituted soon after.

The Whitecaps were looking fairly comfortable with their lead, without creating much to add to it, reducing the visitors to some shots from the edge of the box that Crepeau had no trouble dealing with.

As the game entered stoppage time, it seemed like an unflashy but very important three points were about to be heading Vancouver’s way but there was some late, late drama still to come.

As a long ball came into the box Obrian and Patrick Metcalfe tussled for the ball. The Dallas player hit the deck, but referee Kevin Stott waved away the visitor’s appeals for a penalty. With play stopped, replays showed it was a clear foul on the ‘Caps homegrown and after a video review, Stott agreed and pointed to the spot.

Up stepped Jara, who had only been on the pitch for just over five minutes, but his spot kick was superbly saved by Crepeau, sparking Whitecaps joy as the ‘Caps keeper was mobbed by his teammates.

There was still time for Jara to have another look in front of goal, but he blasted high and over seven minutes into stoppage time. The final whistle came seconds later and BC Place erupted as Vancouver victory was secured.

We won’t know for over a month the magnitude of Crepeau’s penalty save, but it’s moments like these that can propel a team into the postseason. For now, the Whitecaps are sitting ninth in the West, three points off the playoff places and with a game in hand.

With matches coming up Houston and San Jose in the next week, another couple of wins and the ‘Caps can start to be considered real playoff contenders. There’s really no room for error in these two matches with a tough stretch coming up after them. Don’t write this team off just yet. 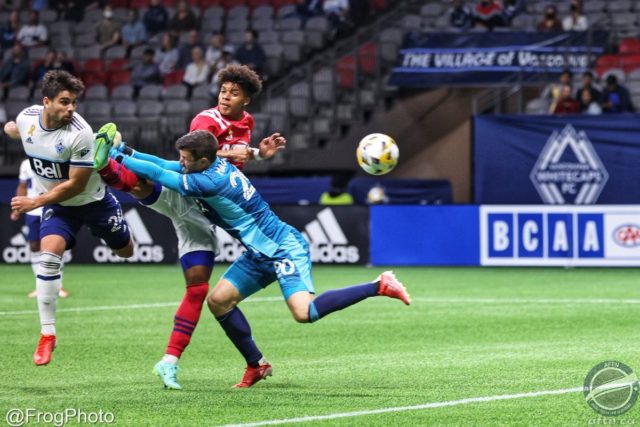 On the penalty call:

“I was thinking that the world isn’t fair, because we deserved to win more than 1-0. I think we played really well. Of course, we need to capitalize and score the chances that we have. There was this feeling that we were doing everything well and at the end even Maxime [Crepeau] did well. It was a little bit of a roller coaster. I think I lost my English composure at some point, right. I think we played fantastically and the only thing that missed today was scoring at the end, we had like six, seven chances. Build up, pressing, everything. So if they would’ve scored the penalty, and to be honest I don’t know if it’s a penalty or not, I was very angry because I think that when the referee stopped the ball, that was our ball not their ball from the play that originated the penalty. But, you know, justice was served.”

“Max did very well, especially in the build-up. And then of course he did what he does. Very good, gives us a safety net, or let’s say, safety to the team. When he went to the Gold Cup, I actually joked with him and I told him, finally you saved a penalty against Mexico and now it’s time to save a penalty for us, and then he did. I think he did really well and he’s been solid but it’s three years he’s been one of the best goalkeepers in the league, so there’s no surprise.”

“To be fair, the team was locked in the first minute of the game until the end. They came in tactically, technically to be close to each other, to make it hard on them, because the only solution that they had pretty much offensively was the long ball in behind the fullbacks, and then Andy had to shift, and Jake on the other side had to shift when it went across. And so the guys did really well and were compact, and with the ball we were composed and were able to turn into important spaces and launch the ball on their flanks so they weren’t defending facing vertical, in which was just difficult for them to do. And after that we had a lot of corners too, to create a lot of chances. And so, to be fair, we deserved that tonight.”

On the moment before the penalty save & what it means for the season:

“Good question, I don’t even know myself. It’s like blank, mentally and physically. It’s just you’re in the moment and, you know, trying to read some cues and then your body just goes and a beautiful moment happened… It was about time. I think it’s like 10, 15 PKs, so it was about time. I’m happy that with this save at the end, yes, we can collect the three points but it’s an important moment in our season tonight. Points at home are super important til the end of the year, and we’ve got to build through that win to go to Houston carry that and then go again and San Jose. But let’s focus first on Houston. But the points at home are crucial and then we need to get the job done on the road, which we know how to play on the road because we’ve been away for a long time before coming back here to BC Place. Our focus is to be in the playoffs at the end of the year, that’s every single guy wants to be above that red line at the end of the of the games.”

“We spoke about it at training this week. It’s that part of the season where every little effort, every little moment counts for so much. I think you saw it at the end of the game. We felt it was a game we were in control of. It was one of those moments where my heart drops, but at the same time I remember running up to Max and saying you’re going to save this. I just had a great feeling he was going to save it. And what an incredible moment. The belief, the momentum that gives the team. Those are the type of moments you just want to be a part of when you join a club.”

On the overall way the team played:

“I felt in the first half in particular was one of our better 45 minutes of the season, in terms of tactically, I felt like we completely outplayed them. We had some big moments in front of goal, probably deserved to come in more than one goal up. But then you know as the game wears on, and you understand that the other team’s going to have their moments as well. For the most part [we] dealt with it really really well, and then of course you need certain players to step up in big key moments and of course so happy for Max. He deserves those kind of moments the way he trains and the way he has improved, what he’s going to go on and achieve in the game. Awesome moment for him, and awesome moment for us as a team.”