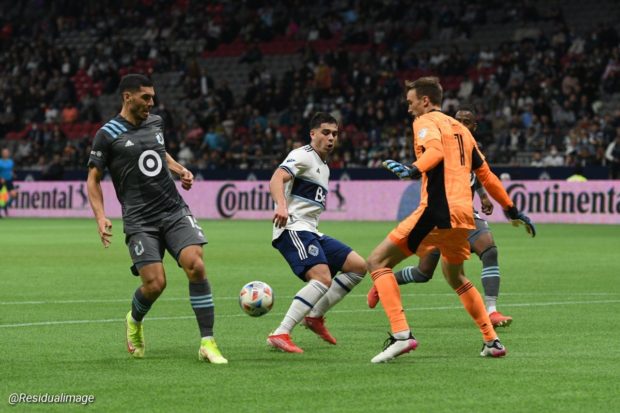 The MLS Western Conference playoff race looks set to go right down to the wire. Every team in the mix are fighting for their lives and that’s meant Vancouver Whitecaps still haven’t been able to keep their heads above water. Every win they’ve achieved has been somewhat negated by those around them also coming up with big victories.

Heading into Wednesday evening’s crucial showdown with Minnesota United at BC Place, the Whitecaps took to the pitch in 9th place. But with the craziness of the wild, wild West this year, a win could have taken them up to 4th, that’s how tight everything is right now.

In the end a Michael Boxall own goal on the stroke of half time and a 12th of the season from Brian White just past the hour mark saw the ‘Caps come away with a huge 2-1 win, good enough to sit 5th in the West with two matches left to play. Fanendo Adi’s stoppage time goal for Minnesota made things a little nervy at the end, but three big points stayed in Vancouver.

Vanni Sartini made two changes for this one, with Jake Nerwinski coming in for Erik Godoy in the back three, and Javain Brown coming in to take up a left wing back role.

For two teams battling for three crucial playoff points, you didn’t know if you were going to get an exciting end to end encounter or a cagey affair, with no side wanting to make a mistake. It turned out to be the latter, with very little to write home about in the first 45 minutes.

Perhaps fittingly then, it was a mistake that saw Vancouver open the scoring in basically the last action of the half.

Russell Teibert sent a beautiful long ball forward for White to chase down. The American stayed onside and got to the ball, but his effort was blocked by the onrushing Tyler Miller in the Loons goal. His block bounced off former Whitecap Michael Boxall, carrying towards goal, and despite the Kiwi’s best efforts it trickled over the line and the ‘Caps had a big 1-0 lead going into half time.

Sartini said at half time that his side didn’t deserve to be ahead. They didn’t. He wanted them to come out in the second half and show they deserved it, but both teams exchanged half chances after the restart without really testing either keeper.

Minnesota came within the width of the right post to getting back on level terms just past the hour mark, with Emanuel Reynoso playing in Adrien Hunou, who poked the ball past the onrushing Crepeau but could only look on in anguish as it came back off the post.

And in a game of fine margins, such moments prove crucial in matches and the Whitecaps went up the pitch and doubled their lead in the 63rd minute, and who else could it have been, but another goal from White.

Cristian Dajome tore forward, playing the ball to Ryan Gauld, and the Scotsman did what he’s done so often in recent weeks and cut the ball back for White to finish with aplomb.

It was White’s 12th goal in 25 league games for Vancouver, a fantastic strike rate and his 8th in his last nine matches.

Minnesota have been the comeback kings in their recent matches, so they certainly couldn’t be written off for the remaining half hour or so, but they weren’t able to muster much offence and the Whitecaps easily coped with seeing out the match, or at least the rest of regulation time.

As the match headed into the first of three minutes of stoppage time, Adi suddenly made things interesting from out of nowhere, scrambling the ball home to set up a nervy ending.

But that was all that Minnesota could conjure up this Halloween week and this time Vancouver did manage to see out the last two minutes without any more drama, securing an absolutely huge three points that moves them up to 5th place in the West, but only two points above the playoff line with two games to go.

The room for error remains zero with LAFC next up on Tuesday. The black and gold sit just outside the playoff places, but just two points behind Vancouver. A win for them next week and they move back above the Whitecaps in the standings. A win for Vancouver and that should secure them a postseason berth. A draw, and it’s still all to play for heading into the last game of the season.

You’ve got to love the drama, even if you can’t fully enjoy it!

On his post-game celebrations:

“I was very happy, and emotional for me is the normal state of my mind. So that’s how I live and when you see people come in and [be] so happy, we need to amp up the fans because it’s not our win, it’s not just a win for the team but the win of everyone, the win of the fans, the win of the city, the win of everyone who loves the Whitecaps. So if someone comes and gives love to us, we need to give the love back. Celebrating with them is the, I would say, is the highlight of the day to be honest. So it came natural to me to go in there and thank them for their support because again, without them it would be much more difficult winning these games.”

“We knew the importance of this game coming down to the end with the playoff push. I think maybe it wasn’t our best first half, but credit to the guys, we got a goal, we held strong and then didn’t concede in the first half so that was good. And then we came out, I think we had a better second half, and got the second goal. Credit to all the guys to really hunker down and see that game out.”

On the belief of the squad:

“I think there’s a real big belief in this group. Obviously, we’ve had a good run of games recently and I think everyone’s kind of bought into Vanni’s tactics, his message, and we’ve all come together to try to achieve that goal of making the playoffs in this late push here so credit to all the guys that come out every day to training and every game to really push and I think you’re seeing the product on the field.”

“Well, what can I say. The game was a direct opponent for the playoffs. We didn’t play our best game, especially in the first half. But what I liked is that we became a team that wins the games even when we don’t play 100 per cent.”

“Well, we had a little bit [of] problems. They pressed us really good. Let’s be honest, they’re a really good team with great players, especially up top, and they have good defenders also. They went high on us, pressed in our half. We struggled to distribute the ball to our offence, and it’s a little bit shaky if I can say like that. But in defence, we were good, they didn’t have any chances, that’s good. And then we get a goal in the end of the first half that picked us up a little bit.”

On the home fans:

“[It was] really nice, I love playing here at BC Place. We are really grateful to our fans. They’re helping us a lot, which results are showing. I hope that against Seattle in the last game it’s going to be even more [fans] in the crowd, it’s going to be a full stadium if it’s possible. And I hope that we’re going to playoffs in front of our fans.”