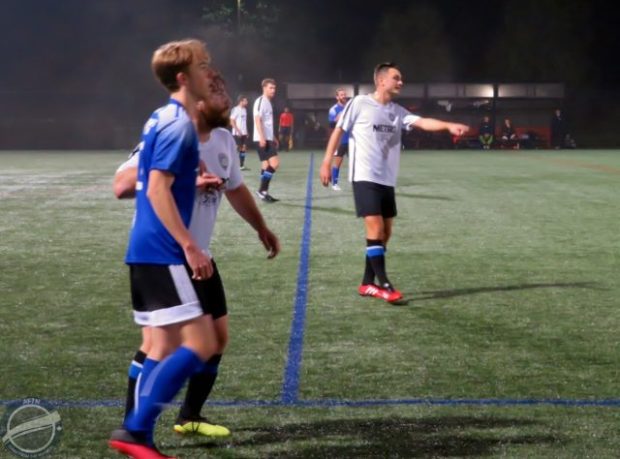 Seven games into a 22 game season might be a bit early to declare the Vancouver Metro Soccer League (VMSL) Premier Division a two-horse race, but right now it’s hard to see anyone stopping BB5 United CCB and Coquitlam Metro Ford Wolves from battling it out between them for the title. And that in itself should motivate the chasing pack.

The top two teams were in rampant form this past week, hitting 13 goals between them without reply, to solidify their places at the top of the VMSL Premier standings. 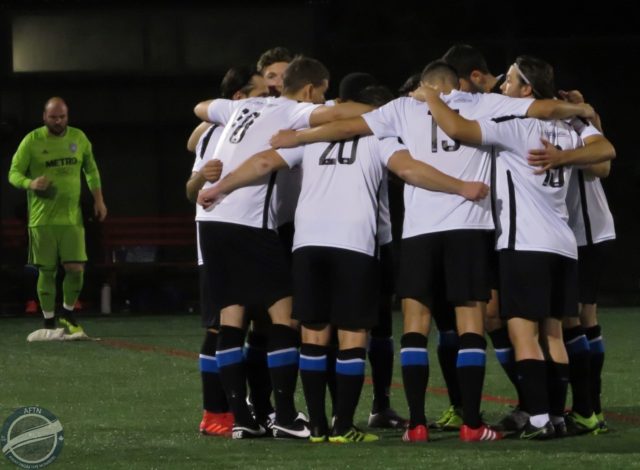 The 5-0 scoreline didn’t really tell the full story of the match. Metro Ford certainly dominated, but the Hurricanes had their chances and could have put a couple onto the scoreboard themselves.

It was an entertaining match on a misty night in Coquitlam but it was Metro Ford’s clinical finishing that saw them out of sight by midway through the first half thanks to three goals in a three minute spell.

Jovan Blagojevic fired Metro Ford ahead in the 21st minute with a nice turn and finish. Two minutes later and he had another after the Hurricanes keeper parried a fierce long range Carlo Basso shot and the former Whitecaps MLS draft pick was on hand to put away the rebound. Less than a minute later it was 3-0 when Basso pounced on a loose passback, rounded the keeper, and tucked the ball home.

Hurricanes had a couple of chances to get on the scoresheet before half time, but the home side kept the pressure on in the second half. Blagojevic completed his hat-trick in the 56th minute, when he was on hand to finish off a rebound off the crossbar, and Juan Sanchez fired home the fifth nine minutes later to round off the scoring.

You can see our highlights from the match in the video below and on our YouTube channel:

That win sent Metro Ford to the top of the table but their lead was to last just under 48 hours until BB5 took to the pitch at Burnaby Lake on Sunday evening, and they certainly put on a show, running out 8-0 winners over MAFC Elite.

Golden Boot leading Caleb Clarke opened the scoring in the 29th minute, grabbing his eighth goal of the season. Yassin Essa doubled BB5’s lead two minutes later, his first of three on the night, and Elie Gindo (41st minute) and Nic Morello (44th minute) gave the Surrey side a four goal lead at the half.

Morello bagged his brace two minutes after the restart, with Ramsey Alfantazi making it six two minutes before the hour mark. MAFC steadied the ship, but two goals from Essa in the final four minutes gave the Whitecaps academy alumni his hat-trick and made it an 8-0 final for the league leaders.

That win moved BB5 on to 19 points at the top, with Coquitlam just one point behind in second. There’s then a five point gap to third, with Rinos VSC Coastal now claiming that spot after making it three wins in a row with a 3-1 victory over Inter EDC at South Surrey Athletic Park on Saturday afternoon.

Taj Sangera put Coastal ahead in the 35th minute and Peter Szigeti doubled their lead six minutes later. But they only headed in with a one goal advantage after Liam Miller reduced the deficit for Inter a minute before half time. With both teams pushing for the crucial next goal, it took until the 81st minute for it to come, and it was Sangera who grabbed his second of the night to give Coastal the 3-1 victory.

Croatia SC lost a bit of ground on the league leaders after dropping two points to NVFC Norvan in a 2-2 draw at Fen Burdett Stadium in North Vancouver on Saturday afternoon.

All the goals came in the second half of this one, with Stewart Elliott giving Norvan the lead in the 52nd minute when he put away a cross into the box from six yards out. The home side had their chances to double their lead but it was Croatia who tied things up 10 minutes later when they capitalised on some sloppy defensive play, forced a turnover, and James Najman hit the equaliser.

Croatia went ahead in the 71st with a lovely finish from Sunny Pamma from the edge of the box that flew into the postage stamp corner, but Norvan came away with a share of the spoils when Jurgen Weinczok fired home an 81st minute equaliser.

You can see Sport Revolution’s highlights from that match below:

In the other two games this past weekend, West Van headed to Newton on Friday night and came away with a 2-1 win over SFC Pegasus thanks to goals from Eoin McCormack and Chase Taylor-Robins. Shabaz Khattra was on target for the horsemen.

Spencer Wright was the difference maker for VUFC Hibernian up at UBC on Sunday afternoon, with the only goal of the game in a 1-0 win over Burnaby Selects White Eagles.

So after all of that action, here’s how the VMSL Premier Division standings look after Week 7: 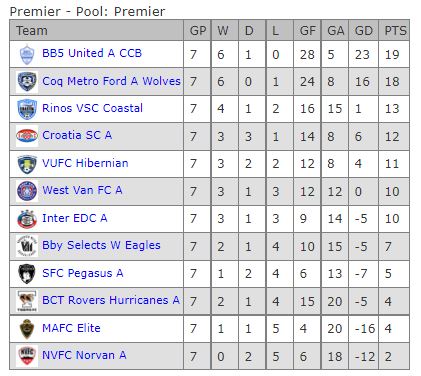