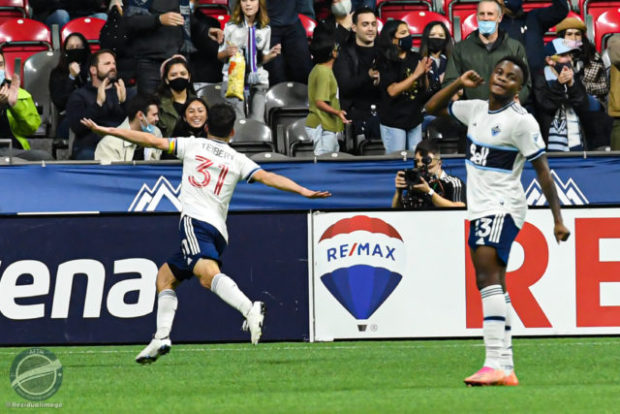 A tradeoff of goals by their Scots meant that Canadian Russell Teibert’s goal in the first half would be the decider as Vancouver Whitecaps defeated Sporting Kansas City 2-1 at BC Place on Sunday.

Ryan Gauld opened the scoring for the ‘Caps before a long range thunderbolt from Teibert put the home side two up. Johnny Russell continued his terrific form scoring his seventh goal in six matches and made for an interesting second half that saw Vancouver hold on to take three very valuable points.

Vancouver opened the scoring in the 23rd minute after they won the ball in the midfield getting it to the left side where Javain Brown sent in a cross from his weaker foot. The cross found Brian White in the box where instead of making an attempt on net, he laid the ball off for Gauld who banked his shot off a defender for his third goal of the season.

Gauld almost doubled his and the Whitecaps’ tally after he was set up at the edge of the box by White, but this time Melia was able to get down and deny the attempt at the far post.

With less than 10 minutes to go in the first half, Vancouver were able to double their advantage when Teibert both started and finished a great team goal, setting up the play before joining the attack, taking a pass, once again from White, and sent a strike from outside the box off the post and past an outstretched Melia.

The Whitecaps were drinking it all in thanks to Gauld and Teibert, but with KC’s dangerous attack they knew they couldn’t rest on their laurels for long and the visitors soon got themselves right back into the game.

Russell’s curling shot from outside the box brought Sporting back in the game, halving the deficit minutes from the half and halting Crepeau’s clean sheet streak at 375 minutes.

Huge goal before the half! pic.twitter.com/xwUyZ6brwh

The excitement of the first half didn’t carry over to the second half with the ‘Caps holding off Sporting Kansas City from getting the equalizer.

While they carried the play and dominated possession, Sporting were held at bay and only able to muster four shot attempts in the second half with none of them being on target.

The three points kept the Whitecaps in position for the postseason, keeping pace with the other clubs battling at the playoff line and they finish the weekend where they started it, one point and one place below it.

An away midweek match against their Cascadian rival Portland Timbers means the Whitecaps will have very little time to relish in the win as the road to the postseason continues. 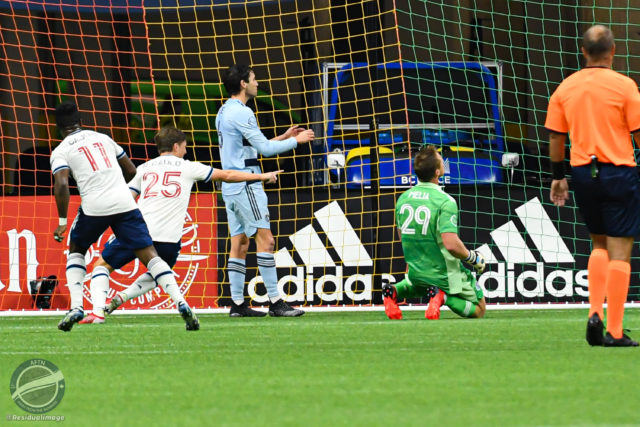 “We did very well. I think it’s the demonstration again that if you work very well during the week, then the work pays off. The week in training was fantastic. The mentality at the beginning was good, we knew that we were playing against a very good team, but I think we’re a good team too. And lately, we had this more of this awareness and everything was very good. The pressure, we forced them to not having their usual play in between lines, they had to play long ball, we won the ball. We were very, I would say fast, you know to break the line and attack the space so that’s the reason why we were two goals up after 35 minutes. [In the second half], we did well, we didn’t change. We didn’t want to be defensive, we just wanted to be, to keep working and pressing high, we adjusted the rotation, the slide where they had to play this long ball – basically the play where we conceded the goal. I think everyone did fantastically and I want to praise the guys that came on. Janio did very well, Marcus Godinho did very well, Tos, Deiber and Jake too. To see that we are a team of 25 players, we’re not a team of 11 players.”

On the playoff race:

“We’re still in the fight, and we’re going to fight ‘til the end. And, you know, yesterday everyone won, but it’s not going to happen every time that everyone’s going to win, our competitors. So we need to win and make more points and to be, I would say, at peace on November 7. If we play like this and if we keep working like this, the chances to celebrate November 7 are higher than the chance that could be missed.”

“Just took a shot on the target and like Tos said it was either going to Kitsilano or it was hitting the back of the net.”

On playing at home:

“I think we have to take care of business in our home games, and we pride ourselves in playing in front of our fans, because everybody knows what we’ve been through this year and the year before. We hear them, they’re loud, and it’s nice, you know, to sing “Stand By Me” with them after the games. It was Tos’ idea and it’s an outstanding idea and it’s a really cool moment between all the players and the fans and the whole organization.”

On the progression of the club:

“I think it was a good performance, very important three points. We were aware that yesterday all the teams kind of fighting for the playoff spots won. So we knew that we had to get the three points tonight so that we didn’t lose any ground on them. It was against a tough team, they’re a very good side with some really good players. So that was a huge three points for us.”

“I think it’s natural that you kind of keep an eye on everyone around you, but I think the most important thing is that we take care of our own business. There’s no point looking at the other the other teams and what they’re doing if we’re if we’re not winning our games. So that’s the most we can do just now, focus on each game as it comes and hopefully it’ll put us in a good position come the end.”

On Vancouver being a difficult opponent to break down:

They worked extremely hard. Their front seven guys were going man to man and we were at times unwilling to run with movement off the ball. You can connect passes and that’s great, but that doesn’t do anything. Possession doesn’t mean anything unless you have a purpose to it, and the purpose has to be to break through the other team. You have to create areas where you have numbers. Too many times we just didn’t do that over the course of the game.

When we ran at them, we were dangerous. When we were just knocking the ball around, it wasn’t enough. You’ve got to give credit to them because they worked hard and they pressed us. We have been pressed before by a lot of teams, but today we just didn’t have movement off the ball. We didn’t have enough creativity. Again, the game is about getting numbers up in good situations. We didn’t do that enough today, and a lot of that has to do with our movement off the ball.

On the two goals conceded to Vancouver in the 2-1 loss:

Those were two really easy situations. The second one was just a lack of stepping out and pressuring the ball. There’s no way that we should give a shot away like that from that distance. We had three guys standing there and there’s no way we shouldn’t have someone blocking it. The other one was a service into the box. It’s one thing not to win a header. It’s another thing not to get to the knock-down first. We didn’t do either.

When we ran past them, we created stuff and we were dangerous. You expect the other team to assert themselves on their home field. They have to be good. But at the same time, we had chances where we did break them down, but we just didn’t go with the zest that you need to in a game like this.

Not enough movement and not enough quality, especially in the first half. In the second half, we kept the ball well but without really doing anything. As for reasons why? Right now, I don’t really know. It’s a disappointing night. We continue to, defensively as a team, allow cheap goals and put ourselves in a hole in games. We’re always fighting back. It’s a frustrating night, especially with the results yesterday and having an opportunity like we did. Once again, we’ve let it slide.

On his confidence after scoring in a sixth straight match:

I always feel like that, even at the beginning of the season when I wasn’t scoring goals. I’m confident in myself. I feel dangerous. I’ve been on a good goal-scoring form recently. But if I don’t score a goal for the rest of the year and we win every game then I really don’t care. The team comes first. It’s nice to help out with goals. That’s my job. But at the end of the day, us as a whole is more important than me scoring goals.

On the team’s struggles after long breaks:

We just need to stop being so sloppy. Every game after a break, we’ve started so poorly. We’re just continuously giving ourselves way too much to do. I have no idea why or what it is. But it’s something that we’re going to have to fix because everyone knows in the playoffs, if you make mistakes like that you’re done. We’re in no position to be able to afford to do that again.