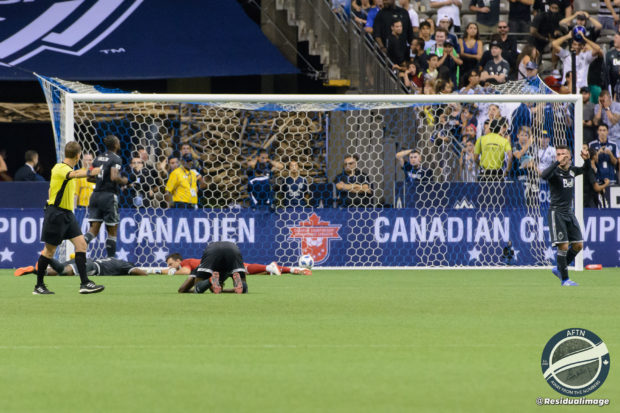 Despite being down a man for the entire second half, Vancouver Whitecaps were looking all set to come out with a 2-1 victory over the defending Voyageurs Cup Champions Toronto FC before an own goal by Doniel Henry in the final minute of injury time changed everything.

The go ahead, and what looked to be the winning goal, came late in the match from second half sub Erik Hurtado after Kei Kamara and Jonathan Osorio had exchanged first half goals.

It took until after the 15th minute for the match to open up with Cristian Techera sending a shot from 25 yards out skimming over the bar.

Despite TFC controlling the majority of possession, their first chance of the night came moments later when Jozy Altidore sent a header into the side netting.

It didn’t take long for the deadlock to disappear from the scoreboard when Kamara converted a 24th minute penalty after Tosaint Ricketts was called for an inexplicable handball in the box. The Whitecaps lead scorer stepped up and buried the spot kick off the left post to give the home side the lead.

Jonathan Osorio made sure the lead didn’t last long when he converted on a half volley into the box to tie the match just two minutes later, and more importantly get an away goal in the two leg series. No-one tracked the Canadian’s run, leaving him open on the penalty spot to swing the tie firmly in the visitors favour.

With less than five minute to go in the half, Felipe almost put the home side back on top but his shot was sent into the side netting.

But that pendulum swung even further into TFC’s favour when moments into first half stoppage time, Felipe was sent off for his tackle on Marky Delgado. The challenge was deemed red card worthy by referee Dave Gantar and the Whitecaps were reduced to ten men once again this season.

It was a decision that infuriated the ‘Caps, who felt it barely even merited a yellow, but with no VAR in play in the competition, there was no recourse and Vancouver were left with a massive uphill task ahead of them in the second half.

Where's VAR when you need it?

Felipe shown a straight red card at the end of the first half.#CanChamp #VWFC pic.twitter.com/X85w8xNRQe

Despite being down a man, the ‘Caps were the first to attempt to break the deadlock after the restart, but Reyna was unable to convert a pass from Nerwinski.

Reyna came close again ten minutes later as he made a run but the final shot went off a TFC defender for a corner.

Minutes later, Ricketts deflected a pass into the side netting which would have put the Whitecaps in a large hole to dig out of, but they breathed a sigh of relief and were looking the better team despite the man disadvantage.

Alphonso Davies then made a run from his side of the field all the way to the TFC box before forcing Clint Irwin into a difficult stop.

The chances finally paid off in the 84th minute when Russell Teibert sent in a ball over the backline into the path of sub Hurtado, who beat the offside trap and after taking a touch slotted the ball past Irwin to give the ‘Caps a deserved lead.

What a ball. What a touch. What a finish.#CanChamp #VWFC pic.twitter.com/gTF5R2o6xa

It was the striker’s second goal in two straight matches, and another neat finish, coming of the heels of how well he took his goal in New York at the weekend.

A 1-1 draw would have felt like a good result in many ways considering how the match had played out, but to go into the second leg with a narrow lead would have given the ‘Caps a massive confidence boost.

It wasn’t to be though and all hopes were dashed in the final minute of stoppage time when Henry, trying to clear the ball over the byeline, headed it past Marinovic, who had no chance to deflect it.

While the draw seems like there is everything to play for in the second leg next Wednesday in Toronto, the two away goals put the ‘Caps in a dire situation. The Whitecaps will need to win the match outright or score at least two if it were to end in a draw. Certainly not impossible, but also certainly not ideal.

Before that match takes place the ‘Caps have some Cascadia business to take care of as they travel down to Portland to take on the Timbers on Saturday. With every MLS point vital right now, the big games are coming thick and fast. 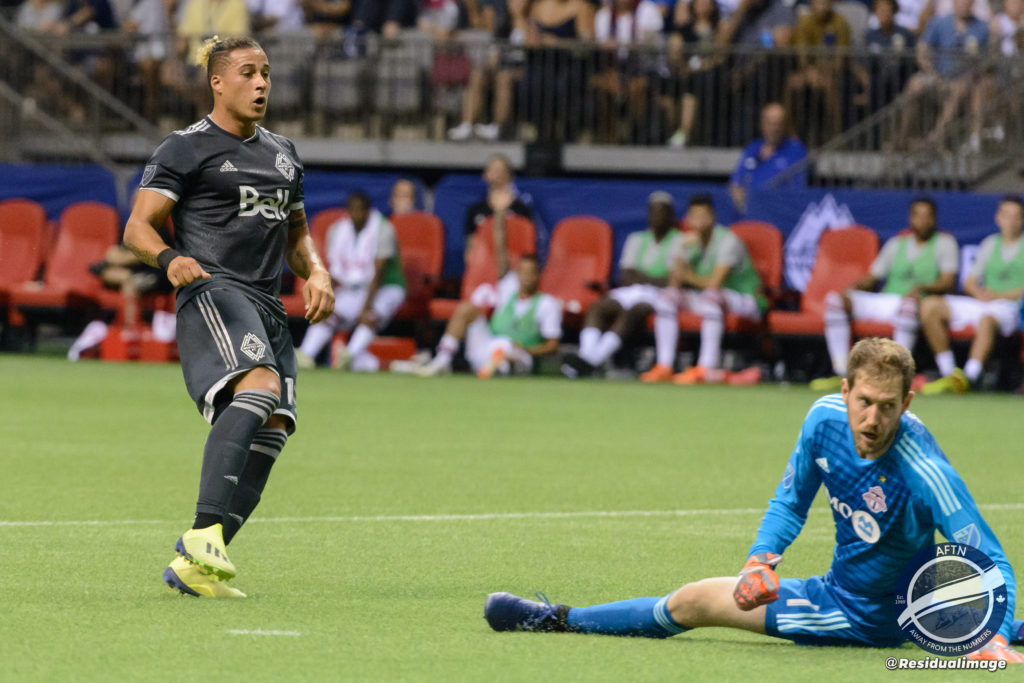 “I’ll talk about my boys’ performance today. I thought it was absolutely terrific. Especially in the second half where we showed unbelievable character, unbelievable discipline, and I’m disappointed we only scored one goal when our counter attacking was phenomenal, and then we get a kick in the teeth at the end with an own goal.Really proud of them today. I thought we had to deal with everything, and I mean everything and we’ll go into that in a little bit of detail shortly, but the effort and character shown by that group is unbelievable.”

Thoughts on Henry’s own goal:

“It’s a foul. It’s a clear foul literally in the lead up to play. It was another decision that he got wrong, David Gantar, during the game. A key decision at a key moment, which is what we all talk about. We sit in meetings with Howard Webb. He tries to get the officiating good. We talk about good players on fields. Top, top players. You’ve got to get the officiating right and it clearly wasn’t right today.”

The club’s had issues with Gantar before, what can be done?:

“Correct. I wish I could tell you what is in my mind at the moment. I’m really not sure [what we can be done with him] because he spoilt the game. It’s not a red card. He’s got that wrong, but it’s okay. This is what I hear all the time, it’s not okay. He’ll be officiating again at the weekend, but it’s not okay because it spoiled a game on live, national TV today of two good teams going at each other, but the 12th person spoiled the game. I’m fuming, as you can probably tell.”

Any consolation from still being very much in the tie?:

“All I said in the lead up to the game, was that I hoped it was a good game. And it was a really good game, but it was spoiled. We know who by, we know what because of, but it’s okay, that’s all I’ll hear, but it’s not okay.”

How do you pick group up?:

“I said to the guys, we get some terrible bad luck and get some terrible calls. Big players. key players, and we’ve got good, young, key players, don’t get any calls. That is a foul in the lead up to the goal, and if it was on the other centre forward on the opposite team, it would one hundred percent be called a foul, but it’s not, because it’s Erik Hurtado. That’s wrong. That’s so wrong, it’s incredible, and I keep saying and I keep talking about it and we keep writing reports about it, nothing changes, and it’s okay, there’s next week.”

On competing with TFC while down a man:

“You saw when we were able to hit them in pockets and catch them in counter attacks, we were deadly as. Disappointed we only scored maybe two goals on the day, with ten men, but we showed them we’re a good team. They’re a good team. They won the MLS Cup last year and they’ve got good players, but so have we. It should be a really interesting tie with whoever’s in charge of officiating next week. We’ll wait and see, eh.”

How do Vancouver now approach that second leg?:

“You know, at the time I thought it was possibly a red card. He raised his foot. I’ve seen it on TV. What you tend to find is football people know what is a rec card and what is a yellow. You get disgruntled managers that might not tell the truth sometimes because they’re biased. But I’ve been told by ten different people in there exactly the same thing, so I’m right this time. And when you’re right, I think it’s a contentious yellow, I can see that, but not a red. Then Yordy [Reyna] goes through at the end and it’s a tackle from behind. You set the tone, You sent the player off, but it’s a yellow card. That’s a disgruntled manager.”

Does playing so well a man down against the MLS Champs give them confidence for the run in?:

“I said to the guys in there, tell me how you feel – disappointed, fuming, angry, and there were a few expletives about the referee. I said to them, I’m so proud of them today because that’s a terrific performance against all the odds, against a good team. Make no doubt about it, they’re a good team, they’ve got good players. They won the treble last year, so we knew it was going to be difficult, but we approached the game correctly, we set out our plan, we just didn’t execute it correctly.”

“Great character by Erik. We put him on playing with ten men. He holds the ball up very well, he wins fouls, but he was very good. He’s a good platform. He’s got power, he’s got his pace, and he’s obviously in-form at the moment and gets another good finish. He done himself a lot of good today.”

“I’m a professional, I chose to do this,” Hurtado said after the TFC game. “I’ve got to be ready for when my chance is called. I go out there at training and do my best and I have to make the most of my chances. It’s my team that’s set me up. Brek Shea on Saturday and Russell Teibert with the ball over the top [against Toronto].”

“Scoring goals gives strikers confidence. So yeah, I’ve got some confidence going on right now, but it’s not up to me, it’s up to the team. We’ve got to rally together and try and get a result in Portland. We know they’re unbeaten in 15. That’s a good challenge for us and we’re looking forward to it.”

Did they set up second leg how they wanted to?

“The scoreline is in our favour with two road goals. That’s a decent road result. We go home now with a need to try and win the game or keep the game in a good position for ourselves. The vision of the game wasn’t necessarily what we anticipated but it’s the result that matters when you go home.”