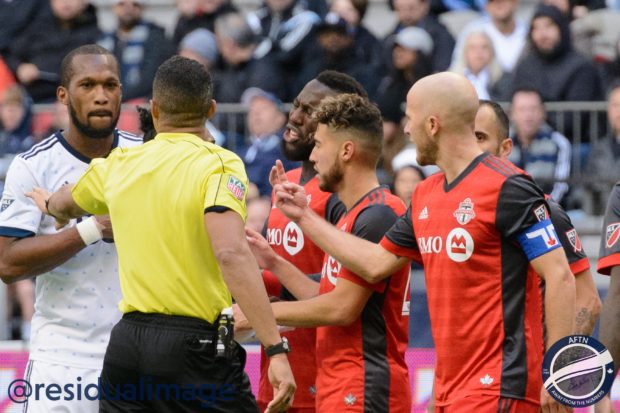 An accusation levelled at Vancouver Whitecaps during their MLS era is that they don’t take the Canadian Championship seriously.

Anyone who was there for the ‘Caps first, and so far only, triumph in the tournament in 2015 knows what it meant to the players, the club, and the supporters to lift the Voyageurs Cup, but that feeling is based on the club putting out weakened line-ups, especially in the semi-finals of the competition, over the years.

The Whitecaps certainly haven’t been alone in that gameplan. Sometimes it’s worked, sometimes it hasn’t. This year, a fringe side went to Montreal, were outplayed, but came away with a narrow 1-0 loss. That set them up for the second leg at home, where a near full strength Whitecaps side saw off the Impact to reach their third Canadian Championship in the last four years.

Toronto FC await. The first leg at B.C. Place on Wednesday comes right in the midst of a crucial time for the Whitecaps. As the gap between those above the playoff off line in the MLS Western Conference and themselves grows, every league point is crucial, but the desire to lift a second Canadian Championship title and get back to the CONCACAF Champions League is also a key driving force for the club. It’s the balancing of both that’s the complicated part.

Realistically, lifting the Voyageurs Cup could be the ‘Caps only success on the pitch this season, and with that in mind, Vancouver headed to take on New York City FC at the weekend without a number of their key starters. That understrength side came away with a valiant point in a 2-2 draw, but was that a sign that the ‘Caps are putting the firm focus on the Canadian Championship right now?

“No, we took Saturday’s game pretty seriously as well,” Robinson was quick to express at Whitecaps training on Monday when we asked him that very question. “People have said we put a reserve-heavy team out. I think that’s a little bit disrespectful to the group of players I have because a number of players have played a numbers of games this year.

“Did we prioritize the Canadian Cup? Possibly, in the first leg, because we know we’ve got Portland away on Saturday as well. But each game is different. We know it’s a difficult tie for us. We know we are the clear underdogs on Wednesday over a two-legged tie. Yes, it’s a final, but they’re a very good team and we have to be at out maximum levels if we want to try and get a positive result.” 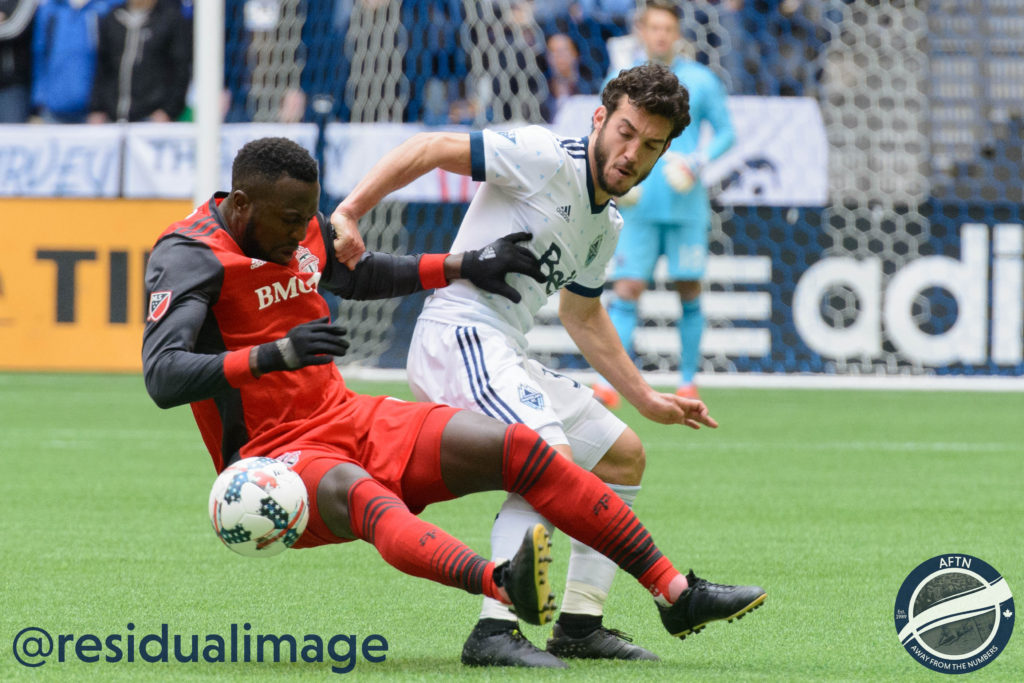 On the flip side, the Canadian Championship may also be Toronto FC’s only shot at glory this season. Like the Whitecaps, TFC are sitting out of the playoff picture looking in right now in the MLS Eastern Conference, and like the ‘Caps, this two-legged final is coming at a tough time. With the games coming thick and fast, prioritizing playing time and managing minutes is also occupying head coach Greg Vanney’s mind a lot right now.

“Important,” is how Vanney described the next two weeks for TFC’s season just before the Atlanta game last week. “Obviously the league play is important. We want to pick up as many points along the way and we have very good opponents. The Canadian Championship is a huge thing for us now that we’re in the final. We want to get back into Champions League.

“I would add to that that some of the travel that’s in front of us is all stuff we have to manage again. It’s a bit reminiscent of the beginning of the season, but we’ll prepare. The good thing is we’re getting close to maximum sort of depth and access to everybody, which will mean that we’ll try to divide up the load a little bit and still try to accomplish what we’re trying to accomplish.”

Vanney highlighting the travel seems odd when he’s playing the Whitecaps, the team with the largest travel distance of all clubs in MLS. Toronto were in Atlanta on Saturday, Vancouver were on the other coast in New York. Toronto then head home for a match at BMO Field against New York City FC on Sunday before hosting Vancouver next Wednesday. The Whitecaps have to head down the I-5 to take on the Timbers on Saturday before flying across the country again for the second leg. I know whose travel looks worse out of that.

Toronto fielded a very strong line-up in Atlanta, while, however Robinson wants to bill it, the ‘Caps did put out an understrength side, resting key players. TFC’s injury woes of the past weeks have waned, as Vanney noted, with Drew Moor really the only main player he’s waiting to get back.

There’s no doubting that those injuries, coupled with their Champions League run to the final derailed TFC’s season. They’ve been playing catch up from the start and failing to claw back the gap between those in the playoff places and themselves. But the signs are there they are in a bit of a resurgence.

They’re unbeaten in their last three MLS matches, taking seven points and reducing the gap to New England Revolution, who currently occupy that sixth and final playoff spot. Factor in the two victories over Ottawa Fury and they’re unbeaten in five, four of them wins.

And it’s that resurgence in league form that now makes the task of picking a team for Wednesday a tricky one for Vanney. They’re still in with a great shot at making the postseason with 12 games remaining, but they can’t afford to drop too many more points, especially at home.

With that in mind, it seems that TFC are going to be prioritizing Sunday’s game against New York City FC, slightly more than Wednesday’s first leg of the final, with the key focus being to come out of Vancouver still in with a great chance of lifting the trophy again.

“It is what it is,” Vanney mused on his team’s schedule. “There’s nothing at this moment that we can sort of giveaway if you will. We’ve got to play every game for maximum points. I don’t know if we’ll get maximum points, but that’s the mindset. In the Canadian Championship, we have to go there and play smart and try to set ourselves up to win it when we return. 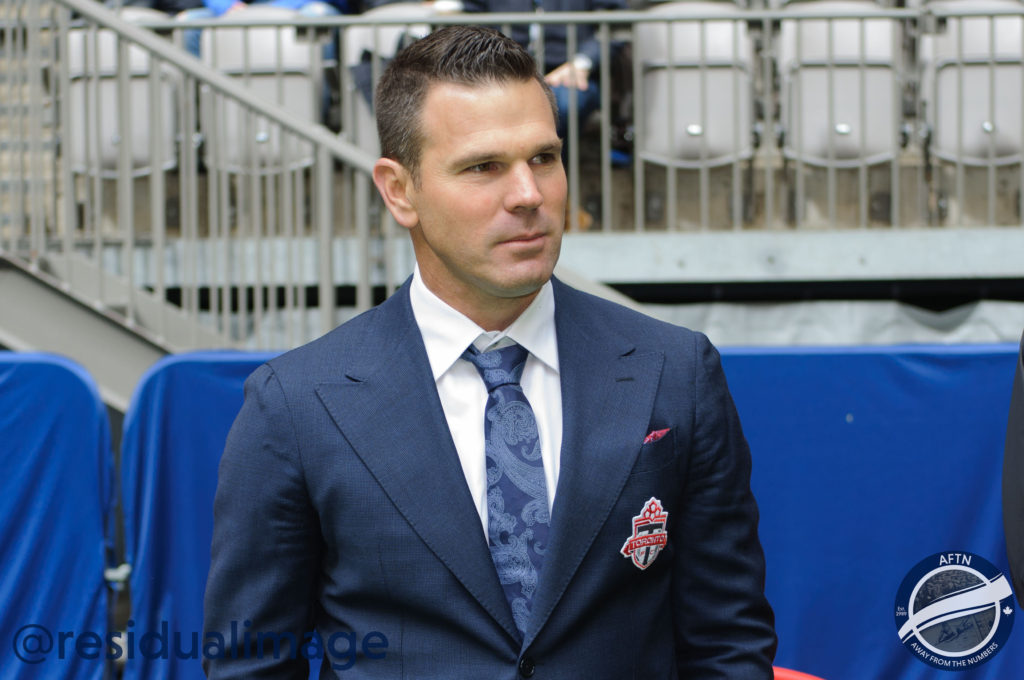 In other words, Toronto will try and do what Vancouver did in their semi-final first leg in Montreal – frustrate the home team with a solid defensive showing, keep it close, and if you can sneak an away goal, all the better. Whether that also means TFC will be resting some of their key players for Sunday’s MLS match remains to be seen, but you have to feel it’s pointing that way.

That may lead to a frustrating game to watch on Wednesday, with Toronto sitting back and forcing Vancouver to break them down. The type of game the Whitecaps have struggled to shine in all season.

“I’m not sure what Greg’s tactics will be,” Robinson said. “I’m sure he’ll have his plan, I’ll have my plan, and at the end of the day it’ll come down to players. I know people talk about coaches playing mind games and all that lot. For me it’s a bunch of nonsense. It’s about player performing when they cross the white line. We’ll have 11 players, they’ll have 11 players.

“Whoever he decides and I decide to pick. You want your players to perform. If your players perform, you’ve got a chance of winning the game. So I’m not sure how they’ll approach the game. I know how we’ll approach the game. I know what we’ve got in our minds what we want to do. I’m sure we’re quietly confident, but I’m sure Greg is as well. Hopefully it’s a good game, which is what we all want.”

The Whitecaps and two legged games have been mixed over the years. But mostly, in the really big ones when it’s mattered most, the ‘Caps have failed to rise to the occasion over the full 180 minutes.

The 2015 Canadian Championship final aside, the tournament is littered by the ‘Caps failing at the final hurdle. The team’s Champions League run last year, saw go through over two legs in the quarter-final against New York Red Bulls, before falling to Tigres in the semis. Then there’s the massive disappointments that have been the Western Conference play off semi-finals against Portland in 2015 and Seattle last season.

Was anything taken from those matches to steer the ‘Caps onto the right path this time around? Well previous experience seems to show that the first leg can produce both good and bad results for the ‘Caps, but it doesn’t matter if they don’t take care of business in the crucial second leg.

“We got a positive result in the first leg in Portland,” Robinson said. “Then they scored an away goal, which was the wrong thing, and then we flipped it last year. We got a decent 0-0 at home after playing three days earlier and then we lost away. So two-legged games are never easy.

“We’re at home. We’ve got in our minds what we want to do, but don’t underestimate it, it’s a difficult tie for us because you don’t win the treble like Toronto did last year if you’re not a good team. They’re hitting form at probably the right time, they’ve got key players all over the park. In a one legged game, it’s possibly slightly different, but over two legs we’re clear underdogs.” 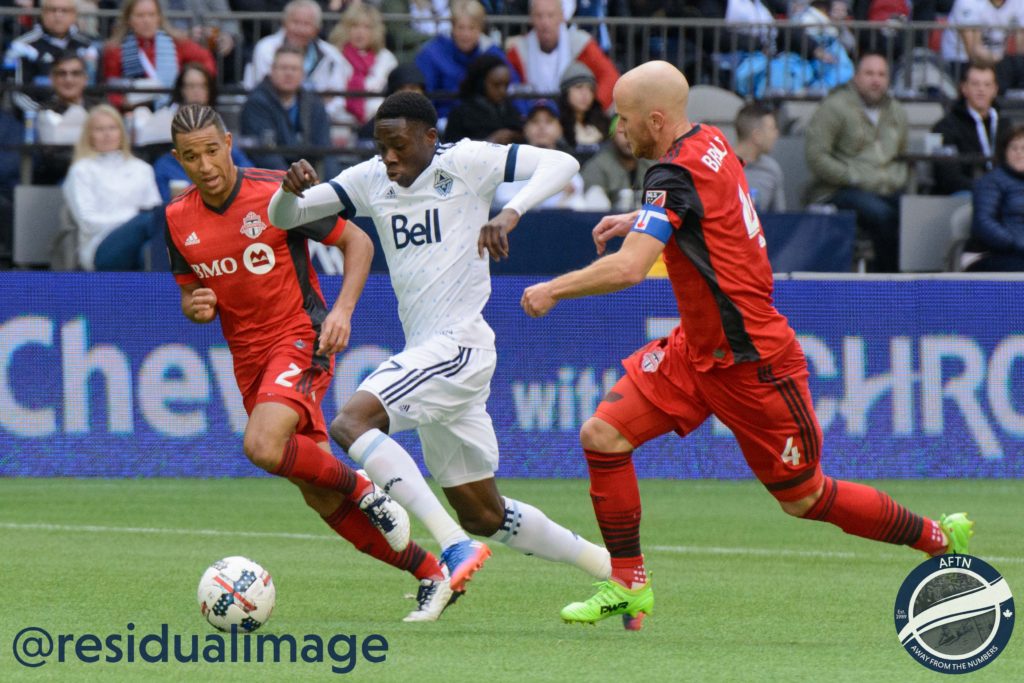