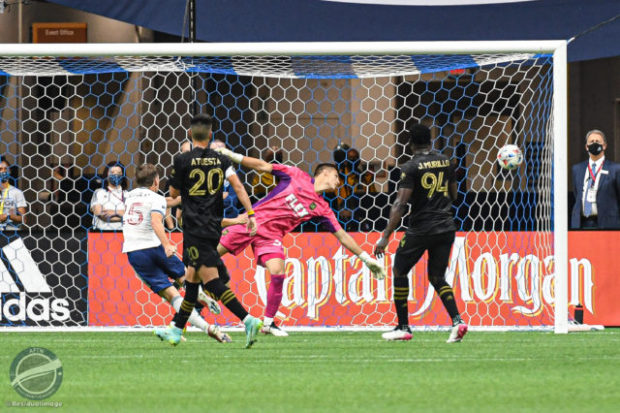 Vancouver Whitecaps played a match in front of home fans at BC Place for the first time since March 2020, and it was a wizard from Scotland that saw them come away with all three points after Ryan Gauld’s dramatic 89th minute winner in a 2-1 victory.

Trailing at the half following a controversial VAR penalty decision that saw Diego Rossi fire the visitors into the lead, the ‘Caps were forced to come from behind yet again after the restart, levelling things up through Brian White on the hour mark, before up popped Gauld to head home a last ditch winner.

With injuries still affecting the side and new DP Gauld still not ready to go the full 90, Marc Dos Santos named an unchanged starting line-up for this one from the ‘Caps midweek win in Austin. And things played out in a very similar manner.

With Vancouver playing at home in front of fans for the first time in 539 days, there was a question around how the emotions of the day would affect them and whether the occasion may get the better of them. LA came out of the blocks fast, forcing a couple of early chances, the closest of which fell to Jose Cifuentes, who curled one over three minutes in.

The Whitecaps soon responded and took the game to the visitors, with a corner running across the goalmouth with no takers. Deiber Caicedo was the liveliest Whitecap and forced a save out of Tomas Romero with a 12th minute curler.

Cristian Arango, who had come on as a sub for Carlos Vela just 16 minutes in, nearly put LAFC ahead on the half hour mark. Brian Rodriguez tore up the right, cutting the ball back to Arango, who saw his effort from eight yards saved by Max Crepeau. The bouncing rebound came back to Arango but he headed over.

Rossi blasted one over from a good position in the 37th minute, but it was looking like the teams would be heading in level before VAR raised its ugly head two minutes before the interval.

Javain Brown challenged for a ball with Rodriguez on the edge of the box, which referee Alex Chilowicz deemed to be a fair challenge. But the ref was called to review it and upon second look deemed that it was not only a foul, but just inside the box and he pointed to the spot, this despite Rodriguez clearly stepping on Brown’s foot and limiting his movement.

Rossi stepped up to slot the ball past Crepeau and the visitors headed in at half time with a not undeserved lead, albeit in controversial circumstances.

Now trailing, it was no surprise when Gauld came on to start the second half for Vancouver and the Whitecaps looked fresher and more dangerous and they tied things up on tbe hour mark.

Cristian Dajome ran onto a brilliant through ball from Brown and sent a cross in from the right which White swept home off the crossbar. It initially looked like it had hit the bar and bounced out off the goalline, with Gauld pouncing quickly to fire the rebound home, but replays showed White’s effort had indeed crossed the line.

Someone in a hoop put it in and that's all that matters 🌈 #VWFC #VANvLAFC pic.twitter.com/0KMSoPJfbH

The goal electrified BC Place, but LA were keen to let everyone know they were still there and nearly retook the lead three minutes later.

Rossi broke forward and saw his shot saved by Crepeau, the rebound fell to Rodriguez, who crashed his effort off the right post.

The visitors turned up the pressure and had a couple of close calls, with the game very much in the balance.

But it took until the last minute of normal time to get the deciding goal.

Janio Bikel played a lovely cross field ball to Brown, who in turn played it to Ryan Raposo. The young Canadian turned around to make space and delivered an inch perfect cross onto the head of Gauld to send BC Place into ecstasy.

Another amazing second half turnaround, and they saw out the seven minutes of stoppage time to secure a MLS club record eighth match unbeaten run and move Vancouver up to 10th in the standings and only three points back of a playoff place with a game in hand over the currently 7th placed San Jose.

For LAFC, their dramatic descent down the table continues, sinking to their fourth straight defeat and they are now winless in six games.

Next up for Vancouver is a local derby, a proper one this time, as they head over to the island to take on Pacific FC in the Canadian Championship on Thursday, before heading back home to take on RSL next Sunday. With Salt Lake currently sixth in the standings, four points ahead of Vancouver, it’s another massive match, but then they all are at this stage of the season.

“I can’t say it more, the spirit of the guys. Everybody feeling important that they play the role when they have to play it, starting or coming off the bench. There was a huge impact from the substitutions tonight. In a game that wasn’t perfect, a game that was really hard for. When LA scored first, they deserved it. They played a lot of balls behind our back, we didn’t deal well with the second balls in the game. They were able to jump into those second balls. They’re a team that’s very hungry for a win, right. And maybe you know our trip, kind of put us in a position that we were sluggish, not good enough in the first half, very difficult second half. Again, the subs helped. It wasn’t an excellent second half, there was good moments, but a little bit of luck in some moments that that is necessary. If I go back to some moments where we were very unlucky in some other games, so I guess it balances out. But the spirit. We had to win our fans back, you know we have a lot of job to do to win the fanbase back because we’ve been far from them, we’ve struggled. So the win is important just to get them back. Of course it’s a fairy tale story for Ryan Gauld to get that goal. And now what I told the guys in the locker room is enjoy, but such a tricky game on Thursday against a very good team. So trust me, we are going to be ready for it.”

On the atmosphere and emotions:

“Stepping on the field today, it was amazing the environment. I didn’t think it would be like that… in my mind I thought I would arrive to something different. But then my emotions were more at the end of the game, giving the fans what they wanted, first game back for so many days in a win against, let’s highlight this, a very good LAFC team, a lot of quality players, a dangerous team. It’s just, it’s unique, I’m emotional with it because the fans, we need to win them back and this is what we want to do. The end of the game, what a connection between players, staff, and fans incredible. And great choice of song. Excellent choice of song.”

On the fans’ support:

“Yea it’s always good to receive a nice response from the crowd and thankfully we’ve paid them back today for the support they’ve given us and we’ll be looking to carry on like that and pay them back because they’ve shown up in numbers today. We’re very happy that we’ve sent them home happy.

On the atmosphere in the first game back at BC Place:

“Coming out, first for the warmups, I mean that was my first time at BC Place with fans. Last year, the first game of the season I wasn’t rostered versus Kansas [City]. And then obviously we played without fans so this is my first game with fans, and coming out for the warmups I had goosebumps right away. We’ve kind of gotten used to playing away [and] kind of forgot what it’s like to be home. Again, for me it was my first experience in front of the fans.”

On the fight the team has shown:

“I mean if you look at the last slate of our matches, we’ve conceded first in a lot of them. And again, we’ve fought back and either drawn or gotten the win in a lot of the matches. So, it just definitely shows the heart within the team and the team spirit. After that Salt Lake game, we came together as a group and we spoke to each other and opened up to each other about what needed to change and how we could turn this into a winning club. Clearly it’s affected the team in a positive manner.”

On “Stand by Me” and what the song means to the team:

“I believe Tos came up with it and I think it’s great at the end of the match when everyone’s buzzing after a win. We get involved with the fans who’ve supported us through the 90 minutes and on. So, it’s definitely nice to sing along with them, for sure. Good vibes.”

On breaking into the regular rotation:

“It’s a talented squad and we have a lot of depth. For me personally, it’s always been about just keeping my head down, regardless of circumstances and improving myself in moments like this. Finding a way to win. I think that’s the most important thing for the club, creating a winning mentality. And that starts with the training in wanting to win in every single drill, and it translates into nights like this when it’s closer. It really comes down to who wants it more. And tonight, we definitely wanted it more.”