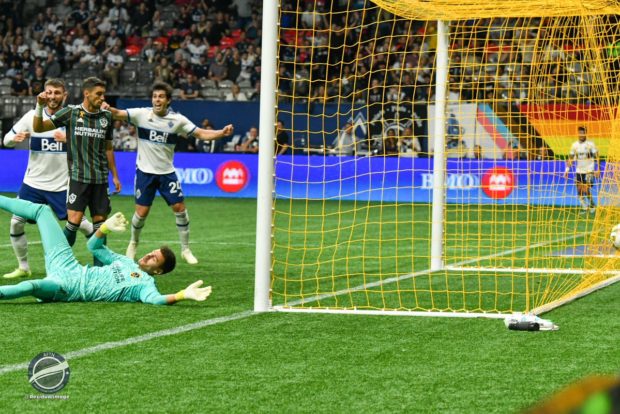 With their season looking all over bar the shouting heading into their match with the LA Galaxy at BC Place on Wednesday evening, what kind of Vancouver Whitecaps were we going to see to finish the season? With the team falling down the standings at an alarming pace, just a month after being in the playoff places, would it be a fighting finish, a spectacular collapse, or something inbetween?

Based on their first half performance, it was looking like one of the last two, but a completely different looking team came out for the second half. One with a sense of urgency and purpose, taking the game to their visitors, who would have moved above the playoff line with a win.

Second half strikes from Ryan Gauld, Pedro Vite, and Tosaint Ricketts kept Vancouver’s faint playoff hopes alive in a 3-0 victory, ending the Galaxy’s six match unbeaten run and adding to the logjam for that 7th and final playoff place in the West.

Vanni Sartini made six changes from the team that lost in Colorado at the weekend, moving to a 4-2-2-2 formation, and perhaps most shockingly of all, playing nearly everyone in what you’d think of as their proper positions.

But right from the off the visitors dominated possession, with Riqui Puig having the first chance of the match, flashing a long ranger over for the Galaxy six minutes in.

Chicharito nearly got his head on the end of a Victor Vasquez cross in the 20th minute, as the Whitecaps struggled to get much going in attack, outpossessed two to one.

The home side did finally get a look on goal in the 28th minute when the ball broke to Tristan Blackmon in the box, but he fired narrowly over and LA went back to knocking the ball about with ease.

And then the half fizzled out into a borefest.

Thankfully the second half started much livelier, with Blackmon heading straight at LA keeper Jonathan Bond from six yards out in the 50th minute.

The Whitecaps kept the pressure on from the corner and Bond saved another Blackmon header on his line, but the Galaxy couldn’t clear the loose ball and it came to Gauld, who finally broke the deadlock from eight yards out.

The first touch and the finish 👌@RyanGauld opens the scoring for @WhitecapsFC. pic.twitter.com/6tpffKGAD4

It was finally some much needed, and overdue, urgency from Vancouver but LA responded by upping their own intensity again and Vasquez didn’t miss by much with a long ranger in the 63rd minute.

Then from nothing, in a move started and finished by Vite, the Whitecaps found themselves 2-0 up in the 68th minute.

The Ecuardorian quickly broke forward, playing a great cross field pass to Gauld, who in turn played it outside to the overlapping Luis Martins. The left back sent a perfect ball into the box, which was missed by Brian White but ran through to Vite at the back post, who hit home for his first goal as a Whitecap.

This counter from @WhitecapsFC 🔥

Chicharito should have pulled one back for the Galaxy with 15 minutes remaining when the ball came to him wide open in the box on basically the penalty spot, but the Mexican blasted high and over.

Two minutes later and Riqui Puig curled one wide and LA must have been feeling it just wasn’t to be their night.

And they were right, as the Whitecaps sealed the deal with yet another Ricketts goal against the Galaxy with four minutes remaining, with the veteran running on to a perfectly weighted Julian Gressell ball, to tuck it away past Bond and cap off a fantastic second half performance.

The victory saw Vancouver climb back up to 11th place in the MLS Western Conference, six points and four places behind Real Salt Lake, who continue to hold on the final playoff spot for now. Without wanting to be a party pooper on a feelgood night, although mathematically the great late run looks to be on for the ‘Caps, the numbers game, the traffic ahead of them, and the fixtures all the teams have left to play make it still look an unlikely proposition.

It’s not impossible but it feels like it’s too little too late, and that in itself is both frustrating and infuriating. Let’s revisit that after the Sounders come to town on Saturday. 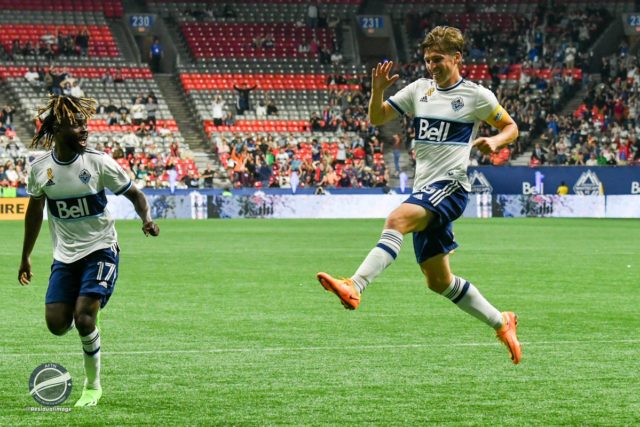 “I’m happy that we played very well and it was a performance that we owe to our fans. The last time that we played here at home we didn’t play well. The last two games actually we did play well, but we were unlucky to be honest in both games. Well not unlucky because if you don’t score when you have to score, it’s your fault. But the team played well, and I think tonight we played well too and we we were on top of them from the beginning, to execute in the plan that left them with a lot of possession and us being very compact and really hard to break. And in the first half, I think we didn’t do the transition like we could have done, because they play a a lot of rotation when they have the ball, so when they lose the ball, it’s normal for them to be outside of position and we to be as fast as you can, we need to start playing those ball in beyond the line. So I reminded them that we tried this yesterday to play this ball. And in fact we scored two out of three goals because of that… We had a clean sheet. That’s a huge thing. So good.”

On Saturday vs. Seattle:

“Saturday we have a big game, taking out the positions, the standings, it’s probably the biggest game of the year against our rival. It’s going to be very hard because they didn’t play today, so they get the full week of rest. And it’s probably the only game where we can see that the travel doesn’t impact because it’s like 11 minutes flight. And so it’s going to be huge, but again, what I like is that it was the win of everyone and Saturday we’ll probably make a lot of changes again because that’s the idea. We need to have guys that are ready to go. Intensity comes over quality sometimes in my opinion.”

“It’s been a tough three weeks, three very disappointing performances and results for us. To come back home and get a big win against a team that beat us pretty handily at their home a few weeks back, it feels good. It feels good to be back in the win column and to get a clean sheet. I honestly couldn’t tell you how long it’s been since a clean sheet. So that feels great, to score three goals as well. You know, we haven’t done that a lot this season, so we kind of put it all together tonight. It’s a good win.”

On playing Seattle on Saturday:

“Three games in a week has been pretty good to us this season, to be fair. We have a great performance staff that helps us recover. We’ll do all the right things that they tell us to do. We’re ready to go. It’s a big Cascadia rivalry, we’ve got them at home, and we’re still fighting for something and so are they so it’ll be a great game.”

“I think it was just kind of believing in what we were doing. First half was a bit of a struggle actually. We defended quite deep, but at the same time they only created one or two chances. We knew that we were better with the ball, with how we would create chances, and we did.”

On playing Seattle on Saturday:

“I can remember the last game of last season was against Seattle, and I thought we performed really well against them there. So we know it’s a tough place for them to come here. And that’s the kind of performance and the kind of attitude we need to be bringing into the game. I think that’s kind of been lacking from us in the previous home games. But you know, that’s the team we need to be, tough to beat, solid and create chances when we’ve got the ball. That’s kind of what we’re going to need to bring on Saturday.”