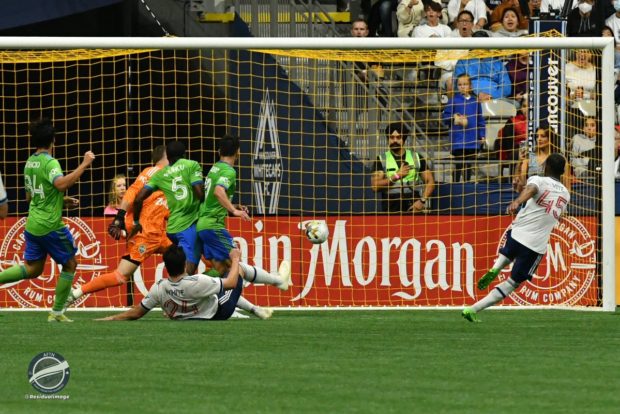 After five years and five months, Vancouver Whitecaps have finally beaten their rivals from middle Cascadia. A fantastic all-round team performance, and a first half blitz that saw goals from Pedro Vite and Julian Gressel, gave the ‘Caps a well-deserved 2-1 win over Seattle Sounders on Saturday night, keeping their playoff hopes alive and dealing a huge blow to those of the visitors.

April 2017 was the last time the Whitecaps had gotten the better of the Sounders, with Seattle winning 10 and drawing six of the past 16 encounters and keeping the ‘Caps off the scoresheet in 10 of them, but that was all to change at BC Place and it did so in some style for the blue and white, even if Will Bruin’s 89th minute header caused a late scare.

Vanni Sartini kept the 4-2-2-2 formation that worked so well in the second half demolition of the LA Galaxy on Wednesday night, making two changes to the starting line-up from that match, with Russell Teibert and Julian Gressel coming in.

That midweek performance from the ‘Caps was both delighted and frustrated, showing just what this team is capable of, but has failed to show when they really needed to these past few weeks. It also showed how dangerous they can be when they attack, take the game to the opposition, and play on the front foot. That felt what was needed to be done against the Sounders, and Sartini clearly agreed.

Vancouver continued where they left off against LA, taking the game to Seattle from the off, with Stefan Frei making a strong save on Luis Martins six minutes in. The Whitecaps kept the pressure on from the subsequent corner with Ryan Gauld heading over.

The ‘Caps kept pressing, playing for their postseason lives, while the Sounders, who maybe didn’t have this as a must win game but knew they had very little room for error, struggled to get much going.

Vancouver didn’t find the breakthrough, as Seattle started to come into things, but any fears that they would be punished for that were soon forgotten when Vite fired the ‘Caps ahead with his second goal in as many matches in the 29th minute, tucking away a Gauld cutback across the box.

Vite breaks the ice for #VWFC in this Cascadia match-up! pic.twitter.com/Jg1Lhm1gmT

It was a great team goal, with nice interplay and short passes to set up Vite’s finish.

What was important for the ‘Caps now was not to rest on their laurels and keep up this front foot football, which they did, adding a second goal eight minutes later.

This time it came at the foot of Gressel, who buried a fantastic long ranger from 20 yards out after the Sounders had cleared a long Martins throw in into their box.

A throw-in for the Whitecaps leads to another goal in less than 10 minutes. pic.twitter.com/sb9ARViiyZ

It had been a tremendous half of football from the Whitecaps, leaving the Sounders looking stunned as their playoff hopes started to slip away from them in front of their eyes. The only negative for Vancouver was the influential Andres Cubas being forced off with an injury in the 33rd minute, which club, country, and player will be hoping isn’t too serious.

Again, though, the ‘Caps couldn’t really afford to take their foot off the gas against a very dangerous Sounders attack, with half time sub Fredy Montero adding to it.

And it was Montero who brought a save out of Thomas Hasal three minutes after the restart, as the visitors noticeably upped their tempo and intensity, but without finding a way back into the match.

The Whitecaps thought they had added a third just past the hour mark when Frei scooped Brian White’s effort off the goalline. No goal was called on the pitch, and with various camera angles failing to show without some doubt that the whole ball had crossed the line, the Sounders breathed a huge sigh of relief and were still in this thing.

The ‘Caps came close again in the 70th minute when Leo Owusu cracked one off the right post from 25 yards, as the game entertainingly flowed from end to end.

The Sounders were still very much in the match and a Yeimar header didn’t miss by much and was a warning to the ‘Caps that they still had to keep things tight, highlighted again moments later when Ranko Veselinovic cleared an Albert Rusnak header off the line.

The Vancouver defence held firm and looked like they were going to see the game out with very little trouble, but Bruin had other ideas, heading home a Montero cross in the 89th minute to set up a grandstand finale.

Seattle is not leaving this one without a fight.

2-1 with 4 minutes of stoppage to go. pic.twitter.com/ucVWwMTFFu

But that was to be it for the real danger for Vancouver and as the final whistle sounded, it was another well deserved three points for the Whitecaps and another very impressive team performance. With two games remaining of the regular season, they now sit in 9th in the West, leapfrogging the Sounders in the process, but three points back of the LA Galaxy, who still have a game in hand.

While it still looks very hopeful at first glance, breaking down the remaining matches for all the teams makes this still a very tall order for Vancouver to make it to the playoffs. But if they keep playing like this and keep fighting to the end, that’s all you can ask for.

There’s odd results at the end of seasons and the Whitecaps need a fair few to extend theirs. If they fall agonisingly short, then the hard questions will need to be addressed. For now, let’s just enjoy the chaos.

“Seattle is one of the best teams on the continent. In front of our fans, [we’re] keeping the game against Austin meaningful in this way, the performance was amazing, we should have won 4-0. Unfortunately we didn’t score the third goal, and in the end of course they have quality players, Will Bruin scored a fantastic goal. Then we were a little bit scared for the last four or five minutes. But I’m very happy, really, really happy.”

On playing in front of a big crowd:

“It gives a lot of boost because at the end, they score and then the crowd helps you and it makes you winning that tackle, or winning that throw in, or attacking the ball even if the ball looks far. So I think, I hope that against Austin, we’re going to have the same kind of crowd or even more. So then we can finish the season with another win, that would be fantastic. We would finish the season on a high note.”

On playing his first rivalry match against Seattle:

“It’s kind of what I expected, in terms of intensity, we wanted to bring it from the start and I think we did. We just didn’t let them walk all over us in those moments, we kind of tried to stay in there and fight back and not give in. Obviously credit towards all the guys and the way we bent but didn’t really break until the very end. It was a great team win.”

On the technique of his goal:

“It’s just trying to get it clean on the foot, not on the toes but on really the front of the foot on top, using kind of the momentum of the ball a little bit as well. So I had obviously a lot of momentum running into it, my timing which was pretty good in that sense. So again, it was more of, not so much picking out a corner or picking out a post essentially, it was more about kind of getting a clean strike and making it difficult for [Stefan] Frei, and yeah it went in.

On scoring his second MLS goal:

“To be honest, I’m very happy. I’ve been working very hard the last six months. Vanni has said I needed to work on my intensity, and I’ve done just that, and now the results are coming.”

On his current run of form:

“It’s actually something very personal, because to be honest, I want to be at the World Cup, to play for my national team, Ecuador. At the end of the day, it’s up to me to work hard to achieve what I want to achieve.”